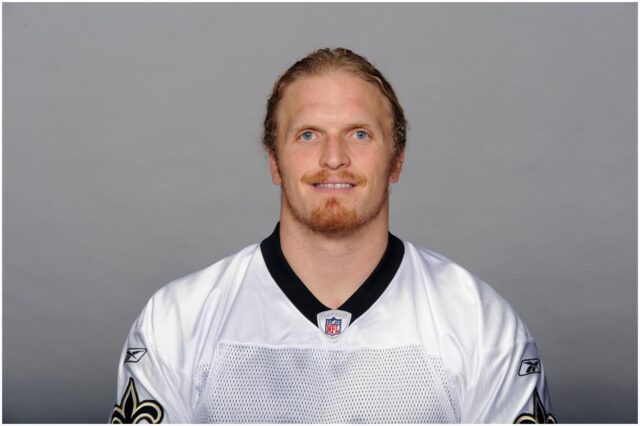 He played for three seasons at Division II Western Oregon.

Later, Jeff transferred to Idaho State University. There, Charleston was voted Defensive and Newcomer Player-of-the-Year in the Big Sky Conference.

In 2006, Charleston was signed by the Houston Texans as an undrafted free agent.

On January 4, 2007, the Indianapolis Colts Colts signed Jeff. There, Charleston started 3 of 13 games at RDE and totaled two passes batted, one FF, four pressures, one sack, and 42 tackles.

For the 2008 season, he was signed by the New Orleans Saints. In the follow-up season, he played in 19 games, tallying 23 tackles.

Also, during his time with the New Orleans Saints, Charleston help the team bring home a Super Bowl win.

On September 26, 2012, he was signed by the Tampa Bay Buccaneers. After one week, Charleston was released.

Southern Charm New Orleans premiered on April 15, 2018, on Bravo. He said about the reality show:

“The hardest part of filming is having to relive tough moments that were filmed for television aired 6 to 8 months later.”

Her family owned the Coghlan Art Gallery in the French Quarter.

His wife once said about the NFL:

”The NFL teaches you, as well as your spouse, to adapt to varying circumstances and unforeseen changes.”

Reagan went on to say:

“It prepares you for life in a way that other careers do not.”

Together, they started a luxury jewelry line. Reagan graduated from Mandeville High School.

During an interview, Jeff confessed:

“We were separated. It was very quick on which she moved on, but she never cheated on me.”

“That’s the one thing. Reagan can’t keep a secret and she can’t lie.”

Some speculated that the reason for their divorce was money. She said:

“To the imbeciles saying I left [because] of what happened with [Jeff’s] mom and saying it had to do with [money] – we never had financial problems.”

“Our house was paid off. I have a successful business. I was finishing law school. I have a super supportive fam.”

“I didn’t talk about how messed up our marriage was because it was embarrassing and I didn’t know what to do.”

After their divorce, Reagan welcomed her first child, a daughter named Reece Ellis Thomas on June 12, 2019.

Jeff found out during a party. He said:

The former NFL player went on to say:

Bravo wrote that his friend Doug is not to blame (Note – Doug actually told him the news of his ex-wife’s pregnancy). Jeff said:

“He didn’t want to keep having to hide anything. He’s a good buddy of mine.”

“I moved out in 2017, separated, then filed for divorce. I didn’t think anyone would be shocked when I started seeing [Reece].”

In 2019, Jeff started to date again. According to Screen Rant, Jeff also said that he doesn’t want to rush love.

”I may have felt no one loved me then but ultimately I was proved wrong.”

“I’ve been on a lot of road trips around America in a car but never on a motorcycle.”

”I don’t blame anyone for my actions at Friendsgiving. I’m not proud of my actions.”

In the past, the Southern Charm New Orleans star used to have an alcohol problem. Jeff declared:

”I don’t know if I’m really supposed to announce this or not, but I’ve stopped drinking. I started being a lot healthier.”

He is a USAW certified coach for weightlifting.

On June 4, 2019, Jeff posed with cast members from Bravo’s new television show about San Antonio’s socialites, called – ”Texicanas.” He wrote on his Instagram:

“Love me some [Texicanas]!! Especially when they come to our [Southern Charm New Orleans] Premiere Party!!”

His mother’s name is Shelley Charleston.

Charleston earned most of his wealth from playing in the NFL. His salary was not released to the public, but in 2013, the average annual salary for a defensive end was around $2.6 million.

Jeff also made some money from sponsors and starring in Southern Charm New Orleans.