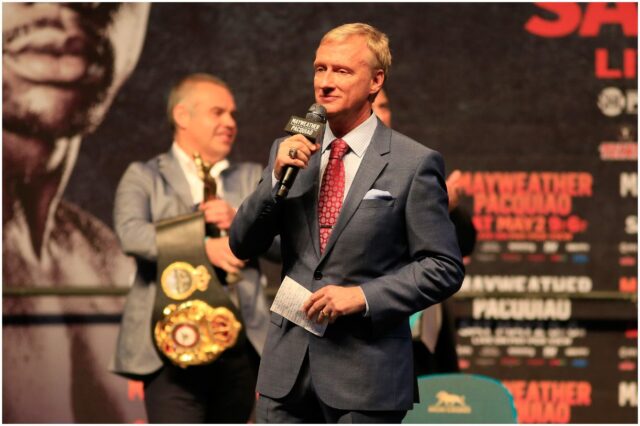 What is boxing ring announcer Jimmy Lennon Jr.’s net worth?

He is best known for his catchphrase:

Jimmy graduated from UCLA with a psychology degree in 1981.

Soon after, he started to teach at a private school in LA.

At the same time, Jimmy followed in the footsteps of his father, who was a ring announcer as well. He said:

”When I graduated from college, people told me I looked and sounded like him. So we did some work together.”

Lennon Jr. went on to say:

”He would do the main event, and I would do the undercard. When his health deteriorated, I took over. But I never studied it. I absorbed it from him.”

”He was my inspiration, he was my teacher. I’m naturally just like him because of our genes but in addition, he always guided me so nicely.”

Since then, his golden voice has thrilled millions of box fight fans over the last three decades, in more than 1,150 world title fights and over 35 countries worldwide.

In 2013, Jimmy was selected as an inductee into the International Boxing Hall of Fame.

Lennon Jr. has been inducted into the World Boxing Hall of Fame.

On April 20, 1992, Jimmy Lennon died of heart failure at St. John’s Hospital in Santa Monica. He died after suffering from heart failure (when the heart can’t pump enough blood to meet the body’s needs) when he was 79 years old.

He was posthumously inducted into the International Boxing Hall of Fame. Jimmy Jr. said:

“It’s long overdue, but it’s a nice correction. Years from now people won’t look at when he went in or who went ahead of him.”

”They will simply recognize my father as the Hall of Famer he is and deserved to be.”

“I don’t want to be disrespectful to the Hall of Fame but I feel like this is a wrong that has been righted.”

“I believe he deserved this many years ago. I also feel fantastic about it. I think years from now no one will remember when he was inducted. They’ll only see that he was recognized for his greatness.”

READ MORE: What is the net worth of Miles Brock?

“They had large crowds and TV audience and this sort of reminds me of that because you never knew with Tyson what was going to happen, and really I don’t know what is going to happen in this one.”

”My dad always encouraged me to have a business outside boxing.”

”My father had five children, and for some reason, he waited until the last child, me, to become junior. And I happened to be most like him.”

“I didn’t try to mimic my father. But he’s really the only announcer I saw, and I was naturally like him, so it became very natural.”

”I have seen people fist fighting with police and tear gas being sprayed everywhere, total chaos all around, so I’ve been part of those wild days in boxing.”

”Tyson may have been unpredictable, in the later years of his career especially, but fans still knew they’d get a fight and more than likely a KO when Tyson was in action.”

”I talk to every fighter and ask for any special requests, like a nickname or hometown. I check the pronunciation if it’s difficult.”

“Announcing fights in the UK holds a special place in my heart for a number of reasons.”

He has introduced fighters in over 35 countries in his long career.

In his childhood, he had no intention of following his famous father into the boxing business.

Jimmy worked as a ring announcer for the Knockout Kings series of boxing video games and its EA Sports MMA game.

He worked as a ring announcer for some historic fights, including:

In the present day, Lennon Jr. works as a boxing ring announcer for Bob Arum’s Top Rank on ESPN events as well as for Fox Sports and Showtime for their Premier Boxing Champions and Showtime Championship Boxing.

In addition, he has appeared in a few movies and worked as a voice actor in video games (he worked for EA Sports).

READ THIS NEXT: Who is Candace Nelson?