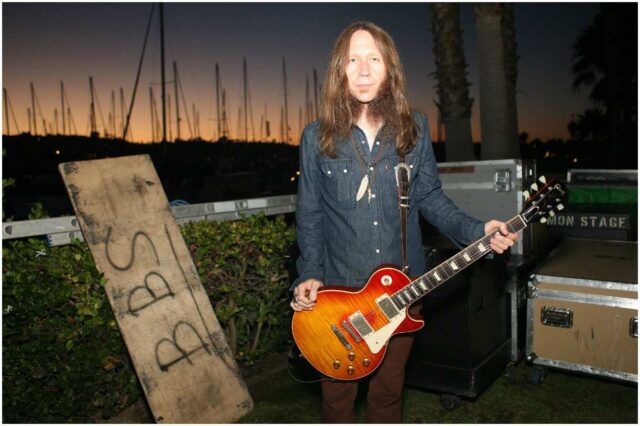 The band has toured with and befriended idols like ZZ Top (with Billy Gibbons jamming with the band on a Florida stop), The Marshall Tucker Band, George Jones, and Lynyrd Skynyrd.

He was born near the Georgia border in the town of Lanett in Chambers County. Most of his family members were playing an instrument and sang.

At some point, his father first taught him how to play guitar. Charlie quoted:

“He got me started. He taught me the rudiments. You know, there were tons of people who would have been my age, friends of mine who played guitar.”

”But very few of them sang and played at the same time. That was one of the most important things that I learned from him was to play and sing together.”

Since Blackberry Smoke formed, the band has produced six albums, the latest of which was released in 2016 and titled “Like an Arrow.”

As a member of Blackberry Smoke, Charlie works with:

They have performed throughout the US as both headliners and as the supporting act for artists, like – Eric Church, Zac Brown Band, ZZ Top & Lynyrd Skynyrd.

During an interview, Starr said:

“It’s always funny to start a tour for a new record, because we wanna play the entire thing. And fans, you don’t know if they’ll be cool with that or not, ’cause they’ve got their favorites and stuff. And it’s like, ‘What do you take out of the set list?’ ”

On November 5, 2014, Blackberry Smoke announced that it had left Southern Ground and signed with Rounder Records.

In 2014, his band did “Workin’ For MCA” for the Lynyrd Skynyrd tribute concert. Charlie explained:

”It was live and a tribute to Lynyrd Skynyrd at the Fox Theatre in Atlanta. We picked it off a short list. We actually picked initially “The Ballad Of Curtis Loew” but John Hiatt had already picked it so we were like, Okay.”

In December 2016, he was named in Music Radar’s top 23 guitarists, a list which includes “rock guitar gods” such as:

As far as Charlie’s concerned:

“We’re just a rock and roll band from Georgia…that just occasionally plays a country song! But really, we’re just doing what we do, and we don’t worry about any of the other stuff.”

On June 19, 2020, Blackberry Smoke released the EP ”Live from Capricorn Sound Studios” via 3 Legged Records. It was followed by ”You Hear Georgia” in May 2021.

“I go to record stores and music stores looking for guitars. Some people go out drinking but not me I’m not drinking anymore. I’ll let them do that.”

”No alcohol for 10 years. And I am trying to quit smoking as well and that’s fucking hard. Definitely harder than not drinking.”

He has two children and lives in Atlanta, USA, with his wife. He quoted:

When asked about the worst concert and the best concert he has ever been to, Starr responded:

”They were this hippie band and they had a song called “Frog Nation Speaks,” and they were complaining before the song about how many frogs were being killed by deforestation and things like that.”

When asked about the last time he got into a bar brawl, Starr responded:

”Well the last bar brawl was probably in 2001 or 2002, and I went to the hospital and got stitches. It was ugly. That was in a tiny little bar in Georgia, and it was a two-night stand.”

His band is notorious for living life on the road, typically playing up to 250 shows a year.

In fact, Blackberry Smoke lives so off the grid that they recorded their 3rd album, The Whippoorwill, in just five days.

When asked about his favorite thing about touring, he responded:

”We’ve been fortunate enough to have toured Europe several times as well and that’s an incredible experience.”

On August 26, 2012, Blackberry Smoke performed at a charity benefit called the Boot Ride.

Starr earned most of his wealth by selling tickets to Blackberry Smoke’s concerts, sponsors, and a part of the albums sold by his band.

Therefore, Charlie Starr has an estimated net worth of $1.5 million.

READ THIS NEXT: Everything to know about Vin Rock