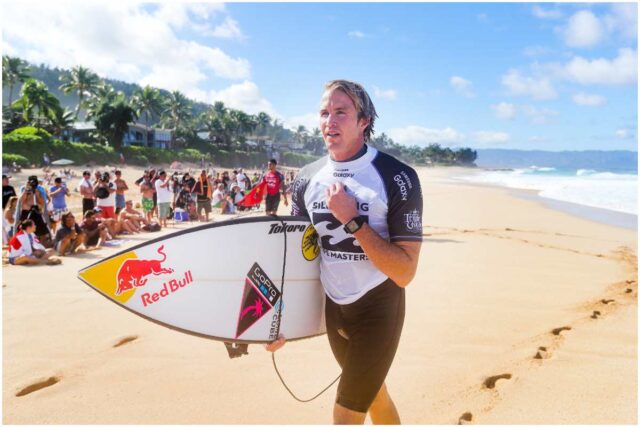 Jamie O’Brien is an American professional surfer from North Shore, Hawaii, who appeared in films like Step Into Liquid and Blue Crush.

In 2004, Jamie became one of the youngest surfers ever to win the Pipeline Masters.

His father was a lifeguard. O’Brien said that one of the things that got him interested in surfing was talking to the surfers on his father’s beach.

During his youth, Jamie competed in kneeboarding, shortboard, bodyboarding, and longboarding events.

Jamie grew up near the Banzai Pipeline in Hawaii.

The Banzai Pipeline is a surf reef break that is located on O’ahu’s North Shore.

It is renowned for huge waves that break in shallow water just above a cavernous and sharp reef, forming large curls of water that surfers can tube ride.

During an interview, O’Brien said about his childhood:

“When I was younger, it was scary and intimidating living right by Pipeline.”

Jamie went on to say:

“But it was still something I’d go to school and brag to my friends about.”

In 2001, O’Brien reached fourth place in the Pipeline Masters. Considering that Jamie was recovering from a groin injury, it was an excellent result.

Note – The Pipeline Masters is an event that attracts the top 45 surfers from The World Surf League.

In 2003, Jamie won first place at the Hansen’s Pipeline Pro. ”The feeling of winning is pretty priceless,” O’Brien once said.

In the follow-up year, he won the Rip Curl Pipeline Masters and Fosters Expression Trestles.

He didn’t participate in the 2020 Billabong Pipe Masters after getting in a quarrel with Ricardo Dos Santos.

Jamie used to date Annika Bauer. She signed to NoTies and Niche Model Management, and is a Southern California native.

Tina was born and raised in Oahu.

In 2019, O’Brien hit his head on the reef at Pipe, resulting in a bad concussion and nine staples. He wrote:

“I almost died at Pipeline! I am lucky to be alive today… I took a bad wipeout, hit my head on the reef, and blacked out.”

”I am thankful for @buellsurf for making me a wetsuit with its own built-in impact vest that saved my life and brought me to the surface. So thankful that when I gained consciousness.”

”From there I went to the emergency room and got nine staples to the skull and feel like shit.”

In 2011, O’Brien sparked controversy after uploading a picture of himself while riding on the back of a sea turtle on his Facebook account. He also wrote the following message:

”Fibropapilloma tumors are starting to show up on other sea turtle species in increasing numbers!”

”If the same pattern of infection occurs as was seen with green turtles, it will not be long before fibropapilloma outstrips even homo sapiens as the single greatest threat to marine turtles.”

Note – according to the law, disturbing, riding, petting, or feeding the animal in any way can result in fines of up to $13,200.

”In this particular instance, this individual was actually riding the animal.”

”I’m not going to compare myself to anybody, but look at Rasta, Tom Curren, Pancho Sullivan.”

”When I go on a surf trip now, I only go when I know it’s going to be perfect and barreling.”

”I actually don’t mind getting pounded. In fact, when I’m gone, I miss it.”

”My whole career has been in board-shorts so I’m thinking about the cold water now.”

”I need to take care of myself, eat well, train, and be healthy.”

”I think once you leave your comfort zone it does become harder to create content, but it’s crazy.”

When asked about the best place to live, Jamie responded:

”Australia, maybe. I don’t think I could live anywhere but in Hawaii.”

O’Brien went on to say:

”It’s got the perfect town and country mix. You’ve got the craziness, all the tourists, all the people.”

In 2016, Jamie helped in the rescue of a bodyboarder who had wiped out and was drowning.

O’Brien earns most of his wealth from his main sponsor RedBull with whom Jamie produces the web series ”Who is JOB.” In the show, O’Brien captures the craziness of his day-to-day life.

In addition, Jamie earns good money from sponsored posts on his Instagram account (probably a minimum of $5,000 per post). Also, O’Brien receives money from ads on his YouTube channel as well as royalties from the films he produced.

Jamis has collaborated with John John Florence and Ítalo Ferreira.

Jamie also sells socks, t-shirts, and accessories on his website – jamieobrienshop.com. Therefore, professional surfer Jamie O’Brien has an estimated net worth of $0.7 million.

READ MORE: Who is Nice Peter?