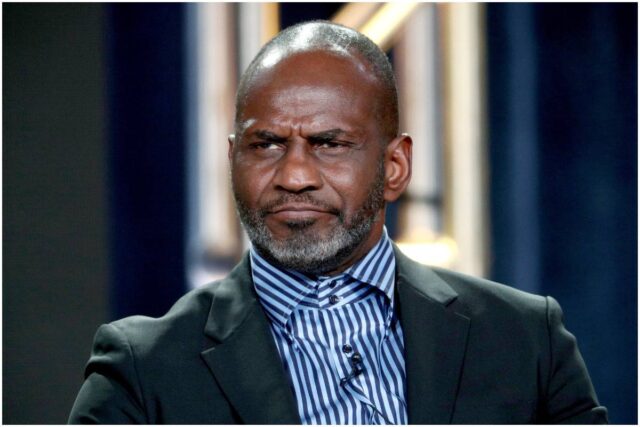 What is Julius Tennon’s net worth?

Julius Tennon is an American actor and producer who has performed in ”Batman v Superman: Dawn of Justice,” ”Faster,” ”Small Soldiers,” ”Hard Promises,” and ”Dazed and Confused.”

Tennon is also a co-founder of JuVee Productions.

Julius majored in theater at the University of Tulsa in Oklahoma.

Tennon became the very first African American to graduate from the theatre department.

During college, he had a full football scholarship. Tennon said in a later interview: ”I had to give up the dream [due to a senior-year knee injury]. I put all that passion into acting.”

His first role was in the thriller Confessions of a Serial Killer (1985) as a police officer.

In 1987, he portrayed Nub in The Man Who Broke 1,000 Chains, a drama film in which also starred Clancy Brown, Val Kilmer, Elisha Cook, Jr., James Keach, Kyra Sedgwick, Sônia Braga, and Charles Durning. The film was written by Michael Campus and directed by Daniel Mann.

In 1988, Tennon appeared in one episode of the TV series ”Dallas.”

In 2000, Julius performed as Dr. James Holly in 2 episodes of City of Angels, a romantic fantasy film starring Meg Ryan and Nicolas Cage.

”We have a vision for the company, and I’m here to carry out the vision with Viola and my team,” Julius told Emmys.

In 2016, Tennon portrayed a general security chief in Batman v Superman: Dawn of Justice, a superhero film directed by Zack Snyder. The film grossed over $872 million at the box office.

In 2018, he served as the executive producer for 7 episodes of the documentary series The Last Defense.

In July 2020, it was announced that JuVee Productions partnered with Amazon Studios for an exclusive first-look deal to include television. They also already have a deal for films.

Andrew T. Wang, JuVee Productions’ Head of TV Development and Production, said: ”Amazon has established itself as a home for artists who are passionate about changing the way that creative content looks and the stories that it tells.”

Viola and Tennon said: ”We are excited to continue our partnership with Amazon Studios, bringing our TV division along with Film.”

They first met on the set of the CBS Series City of Angels in 1999.

Note – Viola Davis became the first African American woman to win an Emmy for Outstanding Lead Actress in a Drama Series in 2015. She starred in Everybody’s Ruby, American Koko, Widows, Suicide Squad, How to Get Away with Murder, The Disappearance of Eleanor Rigby: Them, and It’s Kind of a Funny Story.

”My life got sweeter, richer the day I met you,” Viola wrote on Instagram for the couple’s 14th wedding anniversary.

Davis said about Genesis: ”I always tell her she was born from my heart, not my belly.”

Tennon also has two sons from his marriage to Sheryl Lynn Arnold.

Tennon earned most of his wealth from performing in over 58 movies and TV series, including Batman v Superman: Dawn of Justice, Rizzoli & Isles, The Simone Biles Story: Courage to Soar, Criminal Minds, Operation Othello, The Architect, and Dazed and Confused.

Moreover, Julius is a co-founder of JuVee Productions. The company has a partnership with Amazon and has produced First Ladies, The Last Defense, Woman King, Giving Voice, Emanuel, In a Man’s World, and The March. JuVee Productions previously sold projects to Bravo, Food Network, TV One, USA, Disney+, Apple TV+, Netflix, HBO, and ABC.

Therefore, Julius Tennon has an estimated net worth of $10 million.

READ THIS NEXT: Who is Robert Ri’chard?