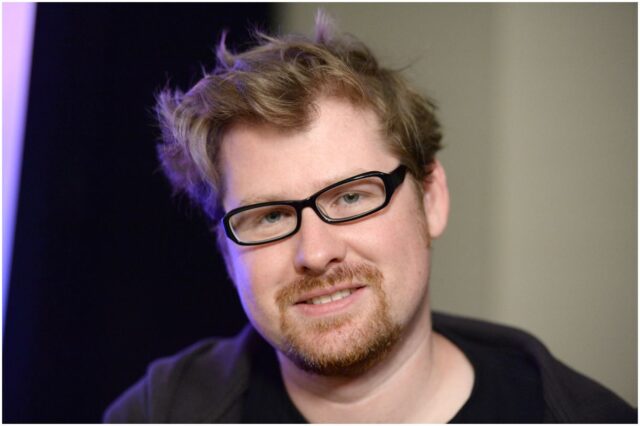 Justin Roiland is an American writer, producer, director, and voice actor who voiced the character Lemongrab on Adventure Time and was the voice of Oscar on Disney’s Fish Hooks.

However, Justin is best known for creating the ”Rick and Morty” series and voicing both of the lead characters.

He was born on February 21, 1980, in Stockton, California, USA, as Mark Justin Roiland.

Justin has a younger sister named Amy Roiland, who works as a fashion designer.

As a child, Roiland says he loved watching ”The Ren & Stimpy Show,” an American animated television series that follows the adventures of title characters Stimpy, a good-natured yet dimwitted cat, and Ren, an emotionally unstable chihuahua.

The series was created by John Kricfalusi for Nickelodeon.

In 2004, he moved to LA and got involved with Channel 101, an Los Angeles media collective that was started by Rob Schrab and Dan Harmon, where Justin acted in the VH1 television show Acceptable TV as well as in various movie shorts, like – House of Cosbys and 2 Girls One Cup: The Show.

Justin co-hosted The Grandma’s Virginity Podcast with Jackie Buscarino and Ryan Ridley from 2010 to 2013.

In 2016, he co-founded a virtual reality studio – ”Squanchtendo.” The name comes from Squanchy, one of the main characters on Justin’s show – ”Rick and Morty.”

In the same year, collaborating with Crows Crows Crows (a studio that is based in Berlin and is working on experimental and unique video games), Squanchtendo released – ”Accounting,” a virtual reality video for the SteamVR platform.

When asked what made him want to become a video game developer, Justin responded:

“VR was sort of the gateway drug for me, it blew my mind… It was the future!”

The official statement is:

”What a surprise to us. We were shocked and surprised. So we decided in order to avoid confusion we are changing the back half of our name!”

Justin currently works as a voice actor on Rick & Morty, for which he is also a co-writer, co-creator, and executive producer with Dan Harmon (an American producer, rapper, writer, actor, and podcaster).

”Rick and Morty” is an American adult animated science fiction sitcom that was created by Dan Harmon and Justin Roiland for Cartoon Network’s late-night programming block Adult Swim. The series premiered on December 2, 2013, and the 3rd season concluded on October 1, 2017.

The series has received near-universal critical acclaim, holding a 97 percent approval rating by critics on review Rotten Tomatoes, one of the most trusted measurements of quality for movies and TV series.

The series follows the misadventures of Rick Sanchez, a cynical mad scientist, and his grandson Morty Smith, who split their time between interdimensional adventures and domestic life.

During an interview, Roiland said that he hates doing the voice of Rick due to the many burps he has to do. In his words:

“In the pilot episode, I burped on every single line. It took four hours to record, and I went home and I felt like I might need to go to the hospital.~

In a review shortly after the 2nd-season premiere, Sean Sebastian of Junkee declared that although the over-the-top voice acting and the crude animation might have discouraged some viewers to continue watching, the series is “exceptionally well-made.”

David Sims of The A.V. Club applauded Justin’s voice talent for the eponymous characters and the “effort to give each character a little bit of depth.” Furthermore, David stated that ”Rick and Morty” has “a dark, sick sensibility” and liked the animation for its “clean, simple style.”

Todd Spangler of Variety said about ”Rick and Morty” that it is “a welcome attempt to dream just a little bigger” and that the series “often seems overly reliant on simply being frenetic at the expense of being witty.”

Justin Roiland is not married, but he used to date Abbie Lyn Maley.

READS MORE: When did Sam Riegel get married?

In addition, Hirsch earned BAFTA and Annie Awards for the series.

Roiland owns two dogs, with “Jerry” being the inspiration for Snuffles.

In 2017, Roiland, Ethan Klein (the co-founder of h3h3Productions, an Israeli-American comedy YouTube channel), and Alex Hirsch raised more than $200,000 for hurricane relief via Twitch live stream in which Justin prank called the Lakewood Church in Houston.

Roiland was born with dyslexia, the most common learning disability. It causes children to struggle with word recognition, decoding, and spelling. According to statistics, 50 percent of individuals with dyslexia are left-handed.

Roiland earned most of his wealth from working as a voice actor in many movies and TV shows, including – Invincible, Solar Opposites, Blark and Son, Rick and Morty, All Elite Wrestling: Dynamite, The Cyanide & Happiness Show, Invader ZIM: Enter the Florpus, and Jablinski Games.

In addition, Roiland worked as a director, writer, producer, and animator.

Therefore, American voice actor Justin Roiland has an estimated net worth of $5 million.

READ THIS NEXT: Is Hugh Jackman married?