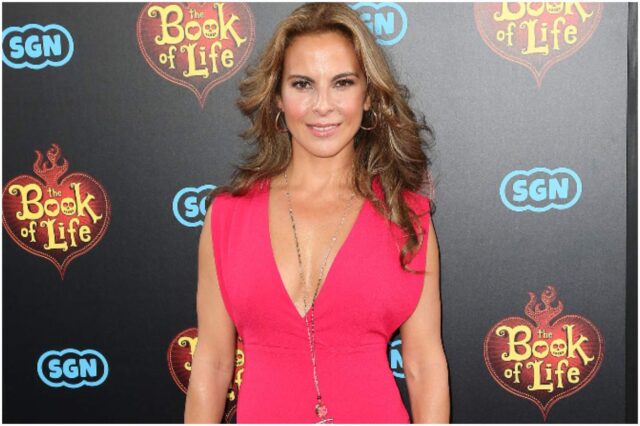 Kate del Castillo (birth name – Kate del Castillo Negrete Trillo) is a Mexican American television and film actress who began starring as the First Lady of Mexico in the Netflix drama Ingobernable in 2017.

In 1998, Kate was nominated for a TVyNovelas Award for Best Young Lead Actress for her role in La Mentira. But, the actress is best known for starring in the popular Telemundo series – ”La Reina del Sur.”

Kate is the daughter of Eric del Castillo, a Mexican actor of television, film, and theater who played in over 45 soap operas.

Del Castillo debuted in the film The Last Escape in 1980.

In 2006, Kate starred alongside Jennifer Lopez in the film Bordertown, an American drama motion picture. The film also features Martin Sheen and Antonio Banderas. The film was produced by Tracee Stanley-Newell, Barbara Martinez-Jitner, Cary Epstein, and David Bergstein, and written by Gregory Nava. The film ended up grossing $8,327,171 worldwide.

In 2009, she was appointed Ambassador for the Mexican Commission on Human Rights to combat human trafficking.

In the same year, Kate became a L’Oreal spokesperson.

In 2011, she starred as “Queen of the South” in La Reina del Sur ($10 million budget), a prime-time telenovela for Antena 3 (Spain) and Telemundo (NBC/Universal). It has been renewed for a 2nd season which premiered on April 22, 2019.

Later that year, she was named one of the “50 most beautiful” and “25 most influential women” by People en Español magazine.

In 2020, she portrayed Isabel Aretas in Bad Boys for Life.

“the most powerful drug trafficking organization in the world.”

El Chapo has appeared on both Forbes’ Most Powerful People list and World’s Billionaires list. In 2019, El Chapo was found guilty of several criminal charges and sentenced to life in prison plus 30 years.

In 2012, Kate attracted El Chapo’s attention when she made a post on her social media account about him and his cartel. She wrote:

“Today I believe more in El Chapo Guzman than in the governments that hide the truth from me even though it is painful.”

After the interview, Sean Penn wrote an article during which he stated that El Chapo wanted to have a movie made about his life and only trusted the story to Kate.

Later, it came out that the meeting between El Chapo and Kate & Penn had helped the Mexican authorities track down and arrest the drug lord.

Sean has denied allegations that he helped lead authorities to arrest El Chapo.

This sequence of events turned Kate’s life upside down. Her text exchanges with Guzman were leaked to the press, and the actress was investigated for possible money laundering. Also, the investigation left del Castillo unable to return to Mexico for 3 years.

In 2018, del Castillo sued Mexico’s former government for $60 million in material and moral damages for an “unjustified” investigation over money laundering allegations.

“I’m broke. I’ve been paying lawyers in the United States and Mexico for so many years.”

In the same year, del Castillo said that she is no longer in touch with Sean and believes that the actor betrayed her. She said:

“Sean Penn apparently helped in the location and detention.”

Kate went on to say:

”I was not aware of that situation, and that is why I have always referred to it as betrayal.”

During a recent interview, the actress said about her meeting with El Chapo:

“It was an experience I will keep in myself and will last forever.”

”I regret that I didn’t follow my instincts in many ways.”

On August 29, 2009, del Castillo married Aarón Díaz, a Mexican actor who was cast in the ABC thriller series Quantico.

READ MORE: What is the net worth of Dustin Diamond?

”I have been very fortunate in my life. I think I have an angel that is always with me.”

”I am a leader in my own world. That’s enough for me.”

”My job is to create myself a career that I can go to sleep satisfied with what I’m doing.”

”I’m interested in seeking projects no matter where, no matter if it is in the United States, whether in Chile, whether in Venezuela.”

”I want a movie that will move something inside me, that’s going to shift something and keep me thinking.”

During an interview, del Castillo mentioned that her favorite band is Duran Duran, an English new wave band that has sold more than 100 million records worldwide.

She became an American citizen in September 2015.

On August 22, 2005, Kate’s house in LA was broken into by thieves who stole some jewelry.

Kate earned most of her wealth from starring in 62 movies and television series. She is best known for her role in the Netflix production called La Reina del Sur.

On November 20, 2015, in association with the Vivanco Family, del Castillo launched a brand of tequila – ”Honor del Castillo.”

Therefore, actress Kate del Castillo has an estimated net worth of $8 million.

READ THIS NEXT: Tamera Mowry Net Worth