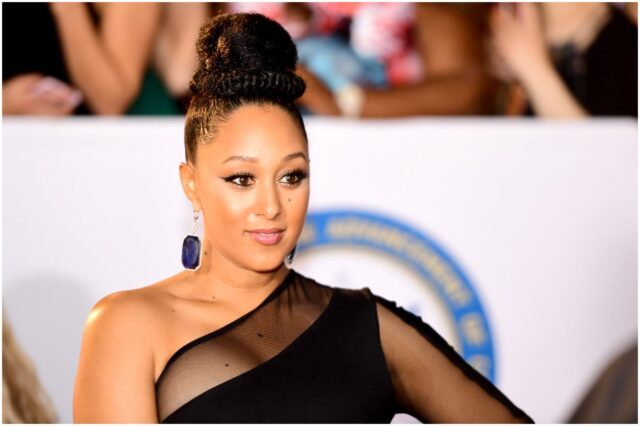 What is Tamera Mowry’s net worth?

Tamera Mowry (birth name – Tamera Darvette Mowry) is a German-born American model, host, author, and actress, who is a co-host on the Fox talk show – ”The Real.”

But, Tamera is best known for playing Tamera Campbell on the ABC sitcom – ”Sister, Sister.”

She can be identified from her twin sister by the mole on her cheek.

Her father was in the armed services stationed in Germany, where the twin sisters were born. Her mother managed her and her siblings’ successful careers from the beginning.

Tamera first gained fame for her teen role as Tamera Campbell on the ABC/WB sitcom – ”Sister, Sister,” an American television sitcom that premiered on April 1, 1994. The sitcom concluded after airing six seasons on May 23, 1999.

The series garnered her several awards, including:

In January 2018, a revival of Sister, Sister was confirmed.

Additionally, Tamera has starred in:

Alongside Jeannie Mai, Adrienne Houghton, and Loni Love, Tamera is currently a host on the daytime talk show The Real. The talk show is currently airing on FOX. It was created by SallyAnn Salsano (495 Productions).

Following their win at the 45th Daytime Emmy Awards, the talk show held a celebratory episode on April 30, 2018.

In 2020, she portrayed Cheryl Jenkins in ”Christmas Comes Twice.”

The book follows Tia and Tamera, who realize they both see visions of the future when they touch another person.

On May 15, 2011, Tamera Mowry married Adam Housley after dating for almost six years.

Note – Adam Housley is a Fox News correspondent who interviewed President of Nicaragua Daniel Ortega in 2010.

In 2011, Adam was amongst the first American reporters on the scene in Japan to cover the earthquake and tsunami. Housley played baseball professionally and was even drafted into the MLB by the Montreal Expos.

She said about Adam:

“I love my husband so much, I love our family, I love our dynamic. I’m proud to be in the relationship that I am because it’s based on love. Pure love.”

In a different interview, Tamera said about her husband:

”I think sometimes some people think of marriage they only think of, you know, one thing like, “Oh I love this person and we’re gonna get married.”

She owns a production company with Adam.

In November 2012, the two welcomed their first child, a son named Aden.

In July 2015, the couple had another child, a daughter named Ariah.

When asked about what is motherhood like for her, Tamera responded:

”It is the most challenging and beautiful reward I have ever been given.”

Alaina Housley, her niece, was one of the victims who died in the shooting at Borderline Bar & Grill in Thousand Oaks, California, on November 7, 2018. Alaina was a freshman at the Malibu university.

Thirteen people were killed, including the perpetrator, who died of a self-inflicted gunshot wound. Many national sports teams highlighted the victims and donated money to the family affected by the shooting.

Several hours after confirming Alaina Housley died in the shooting, Tamera shared a heartfelt tribute to the Pepperdine University student from Napa, California. She said:

“I was blessed to know you ever since you were 5. You stole my heart. I will miss our inside jokes, us serenading at the piano.”

”I have a best friend as a husband, and he is my number one supporter.”

“I like to choose to focus on the positive because whatever you throw out comes back at you.”

“I am messy. Not really really messy, but I’m not as neat as Tia. She’s so neat!”

”I tried the ‘missionary dating’ where you have a person with a great heart who you think is perfect and wonderful except for this one important area that you try to change.”

She is friends with:

In the 1990s, Tia and Tamera were in a singing group called Voices. The group also consisted of members LaToya McMoore, LaPetra McMoore, Arike Rice, and Monique Wilson.

In July 2013, Tamera revealed that she did not lose her virginity until she was 29 because she is a devout Christian.

Mowry earned most of her wealth from acting. She has performed in more than 31 movies and TV series.

Tamera is best known for her role on the ABC/WB sitcom Sister, Sister.

Moreover, she currently earns money from being the host of The Real. She also makes some money from selling her book – Twintuition: Double Vision.

Therefore, American television personality Tamera Mowry has an estimated net worth of $5 million.

READ THIS NEXT: Shelley Morrison Death