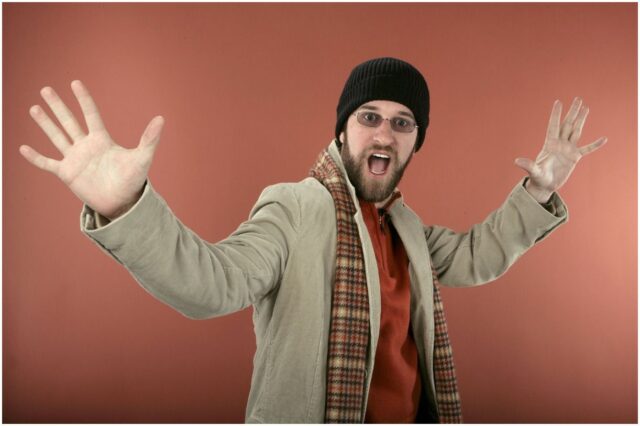 His maternal grandmother’s family has lived in the American South for several generations. His mother had English, Scottish, and Irish ancestry, and was a computer operator for Pacific Bell.

Dustin’s father is of Ashkenazi Jewish descent and taught digital electronics for a computer-processing firm.

Saved by the Bell

”Saved by the Bell” television series aired four seasons between 1989 and 1993, making stars of its cast, that included:

Diamond was in 4th grade when he was cast as eighth-grader Samuel “Screech” Powers.

Note – he was three years younger than most of the cast, however, his character was the same age as theirs.

He began doing stand up comedy after the end of Saved by the Bell franchise.

During an interview, Diamond said:

“Comedy is a noble profession, but most people start out in stand-up comedy hope to get a TV show.”

At the end of 2014, he was arrested after a bar brawl in Wisconsin. Dustin was accused of stabbing a man at a bar after his fiancée got involved in an altercation with a woman who was harassing her.

He said he was defending Schutz (his fiancée) at the time of the fight. Diamon explained:

“I had my pocket knife like this… and the blade was right here and the guy came from around me and grabbed my throat, and so he nicked his arm on the tip of it.”

In a later interview, Dustin said the fight began after people asked to take photos with him.

He was later charged with felony assault.

On June 25, 2015, the American actor was sentenced to four months in jail as well as to a post-sentence period of probation.

Diamond served three months and was released on probation. In May 2016, his probation agent determined that Diamond had violated the terms of his probation, and he was arrested again.

During a post-jail interview with former Saved by the Bell co-star, Mario Lopez, Dustin confessed:

In 2006, Diamond apparently starred in a Sex Tape, that went by the title of – ”Screeched – Saved by the Smell.”

In 2013, he appeared on the Oprah Winfrey Network’s ”Where Are They Now?” and he said that he used a “stunt double,” with his face digitally added in later, and he wasn’t in the sex tape.

In September 2009, Diamond published a book, named – “Behind the Bell.”

In the book, the actor states that he has had sex with more than 2,000 women, one of them being NBC’s VP of children’s programming, Linda Mancuso.

Additionally, he painted an unflattering portrait of many of his colleagues from Saved By the Bell and their backstage behavior.

During a later interview, Dustin said that the book was written by a ghostwriter who “fabricated a whole bunch of stuff.”

“Imagine how I feel, I haven’t talked to Mark-Paul [Gosselaar] or Elizabeth [Berkley] or Tiffani [Thiessen] in ages, so I can’t imagine what they think, and I’m hoping this will clear it up.”

“It wasn’t me, I didn’t write this. I was just as shocked and appalled.”

In 2009, Dustin Diamond married longtime girlfriend, Jennifer Misner. Dustin first met Misner during a tour in Pennsylvania and then started dating her.

Diamond and his wife later separated.

Dustin passed away on February 01, 2021. He was previously diagnosed with stage 4 small cell carcinoma.

”We are saddened to confirm of Dustin Diamond’s passing on Monday, February 1st, 2021 due to carcinoma,” it was announced on his Facebook. ”This loss is as much stinging as it is sudden.”

”The Britney Spears fans aren’t going to dig us.”

”Screech and I have a lot in common. We are both strange, funny, interested in computers, good at chess, and chick magnets.”

”Kids these days don’t know as much about music as they think they do.”

”I’m a shepherd, not a sheep, and I’ve always prided myself on being a leader and not a follower.”

”I hope people stop remembering me as Screech and remember me as Dustin Diamond. I think my stand-up routine is helping that.”

In May 2006, readers of Stuff magazine voted Dustin the 3rd most annoying former child actor that they would like to punch in the face.

In 2007, he appeared as a contestant on Celebrity Fit Club, a VH1 reality program.

Dustin has a black belt in karate.

Diamond was the only cast member to star in every incarnation of Saved by the Bell franchise.

The actor appeared as a host at the twelfth annual Gathering of the Juggalos.

When asked what is the hardest thing about being a child star, he responded:

“You don’t get a childhood, really. You’re a professional and you got to know your lines and rehearse and practice.”

Therefore, at the time of his death, actor Dustin Diamond had an estimated net worth of $1 million.

3 thoughts on “Dustin Diamond Net Worth”