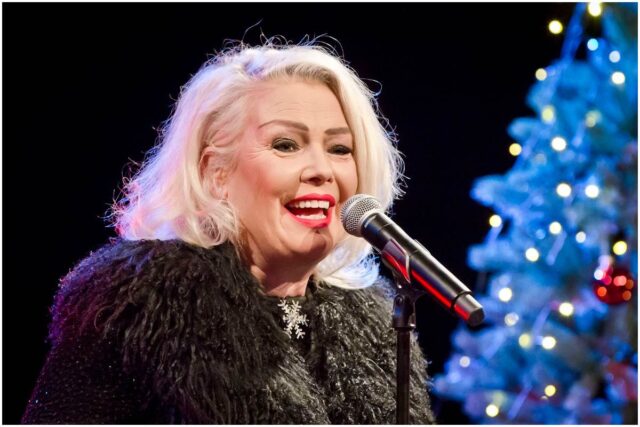 Kim Wilde is an English pop singer and author who holds the record for being the most-charted British female solo act of the 80s.

Her parents are singer Marty Wilde and Joyce Baker.

Her self entitled debut album was released in June 1981 via Rak Records. The songs were written by her younger brother Ricky and her father.

In November 1984, Wilde released another album called – ”Teases & Dares” by MCA Records. It was followed by ”Another Step” in 1986.

In 1988, she supported Michael Jackson on his Bad tour, performing to over two million people. For participating in the ”Bad” tour, Wilde earned around $2 million.

”When I was on the Michael Jackson tour, I should have been happy,” Wilde confessed in an interview. ”It gave me an insight into that level of fame — there were lots of ugly aspects to it.”

Later, she retired from the limelight. ”I started going through a bad depression towards the end of my career,” Kim explained. The singer added: ”My self-esteem was really low. It took me a few years to recover from it.”

They first met when they co-starred in the musical The Who’s Tommy. ”I was very lucky to meet my husband when I did when I was 36, he’s a good man, and we’ve been together for 20 years now,” Wilde said in a 2016 interview.

When Wilde was pregnant with Harry, she decided to study horticulture at Capel Manor College.

”I was always drawn to plants and nature,” she told BBC. ”It’s very healing, and very therapeutic and inspiring.”

In 2005, she won a gold medal at the Royal Horticultural Society Chelsea Flower Show.

”My husband and I are always in the garden, either working on it or planning it,” Wilde revealed for The National News.

In 2005, Kim released the book ”Gardening With Children.” It was followed by ”First Time Gardener” in 2006.

In 2006, she signed a new record deal with EMI Germany.

”In 2009, my husband and a friend of mine witnessed two incredible lights in the sky over Welwyn Garden City,” Kim explained. She continued: ”All of a sudden, it moved very quickly, from about 11.00 to 1.00. Then it just did that, back and forth, for several minutes.”

”It was some kind of sphere – no one knows how big, but my feeling was that it was very, very massive indeed,” Wilde said in another interview.

In 2010, Kim inked a deal with Sony Music Germany.

On October 23, 2013, Kim started her YouTube channel. One month later, she released an album titled – ”Wilde Winter Songbook” via Wildeflower Records. Her daughter sings backing vocals on the song Hope.

In 2018, Wilde released the album ”Here Come The Aliens.”

”I feel older, wiser, calmer, happier, and more comfortable in my own skin than I’ve ever been, right now.”

”You need a bit more to be a pop star than just a good voice.”

”Gardens are always the first place I go to regenerate … they are a complete sensory experience.”

”As I have got older, there’s a little bit more of me to love than there used to be.”

”Real talent will get through whatever the obstacles.”

When she was asked by The Guardian about which living person she admires the most, Wilde replied:

”Greta Thunberg [an environmental activist known for her straightforward speaking manner]. She has reached into the hearts and minds of people all over the world.”

Wilde earned most of her wealth from performing on stage and selling more than 10 million albums. Some of her released albums include – Wilde Winter Songbook, Now & Forever, Love Is, Love Moves, Close, Another Step, and Catch as Catch Can.

In addition, Kim has published several books, including – Gardening With Children and First-Time Gardener.

Therefore, singer Kim Wilde has an estimated net worth of $22 million.

READ THIS NEXT: Joe Ligon Biography