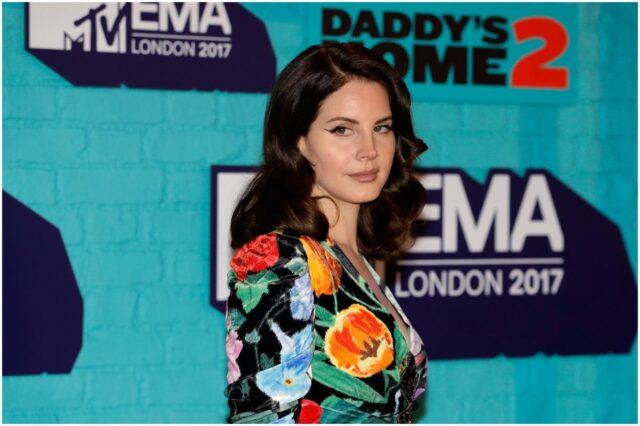 She graduated with a degree in philosophy and metaphysics from Fordham University in New York.

In October 2011, Lana signed a joint record deal with Polydor and Interscope Records.

In 2012, she released her first major-label album, Born to Die, via Interscope Records and Polydor Records. Born to Die’s music style has been described as trip-hop, sadcore, indie pop, baroque pop, and alternative pop. The album spent over 300 weeks on the US Billboard 200, and it peaked at number two on the U.S. Billboard 200. Born to Die sold more than 3.6 million copies worldwide in 2012.

In 2013, Lana wrote, directed, and starred in Tropico — a short music film described as “a tale of redemption told to the music of Body Electric, Gods & Monsters, Bel Air.”

She won the award for International Female Solo Artist at the 2013 BRIT Awards.

In June 2014, Lana released her next album Ultraviolence via UMG Records. The album debuted at number #1 on the US Billboard 200. It sold more than 880,000 copies worldwide in its first week of release.

In May 2015, she went on The Endless Summer Tour featuring live shows with Grimes and Courtney Love.

On September 18, 2015, Del Rey released her 4th studio album via Interscope Records and Polydor Records. It debuted at number #2 on the US Billboard 200.

On July 21, 2017, the singer released her 5th album – ”Lust for Life” via Interscope Records and Polydor Records.

In 2012, she was rumored to be romantically involved with Axl Rose. Lana also recorded a song entitled – “Axl Rose Husband,” in which Del Rey sings:

”You’re my one king daddy, I’m your little queen.”

Larkin and Del Rey broke up in March 2020. He said in an interview:

In December 2020, Lana got engaged to musician Clayton Johnson.

”I have hope with certain things, and then with other things I’m more skeptical.”

”Things have been confusing for a long time, whether it’s politically, culturally, personally.” (Harper’s Bazaar)

”Fashion is inspired by youth and nostalgia and draws inspiration from the best of the past.”

”My plan is having no plan, pretty much all the time, which actually works out very well for me.” (NY Times)

The artist produced two EPs under the stage name ”May Jailer.”

Del Rey earned most of her wealth from selling tickets to her concerts as well as her albums.

She has sold more than 13 million singles and over 19 million albums worldwide.

Lana also makes money from ads on her YouTube channels that have combined views of more than 7.6 billion – meaning over $20 million in revenue before state taxes.

She has contributed to several film soundtracks including Big Eyes, Maleficent, and The Great Gatsby.

Therefore, American singer Lana Del Rey has an estimated net worth of $35 million.

READ THIS NEXT: Who is Jonathan Antoine?