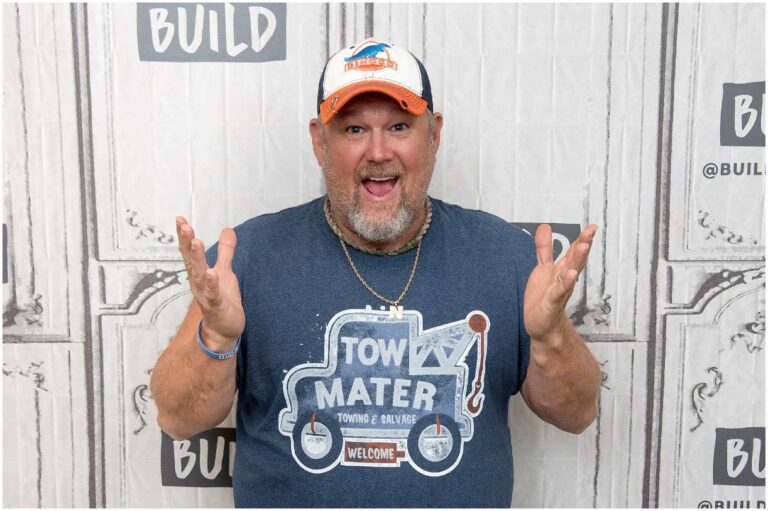 Larry the Cable Guy (birth name – Daniel Lawrence Whitney), nicknamed – Larry, is an American stand-up comedian who has worked in the Disney Cars franchise as well as on the Blue Collar Comedy Tour. He is best known for the catchphrase “Git-R-Done!”

Whitney was born on February 17, 1963, in Pawnee City, Nebraska, USA, to Shirley Whitney and Tom Whitney. His father is a Christian minister and a guitarist.

His hometown of Pawnee City, Nebraska has a street named after him.

Larry was raised on a pig farm. He once said:

“I grew up on a pig farm in Nebraska, so I’m a country kid.”

Daniel went on to say:

“So when I moved to Florida, I pretty much gravitated to the country kids, to the redneck kids.”

He attended high school at The King’s Academy in West Palm Beach, Florida.

In 1982, Larry graduated from the Berean Christian School.

In the early 1990s, Whitney made regular radio appearances on The Bob & Tom Show as well as on the nationally syndicated program, The Ron and Ron Show.

He was part of the comedy troupe The Blue Collar Comedy Tour. The group was also composed of Jeff Foxworthy, Ron White, Bill Engvall.

In 2005, Daniel won Billboard’s Comedy Artist of the year and Comedy Album of the year.

In the same year, Whitney was featured in Gretchen Wilson’s music video for the song “All Jacked Up.”

In 2011, Daniel hosted his own TV show on the History Channel: Only in America with Larry the Cable Guy.

He wrote in the book that he deliberately “turns on” the accent both on and off stage.

On July 3, 2005, Larry the Cable Guy married Cara Whitney in a Nebraska field.

Cara was in a camo tank top and shorts, while Daniel wore a cut-off sweatshirt.

During an interview, Larry said about his wedding:

“Afterward, we re-heated lasagna for everyone and set off fireworks. [Cara]’s a bonafide, grade-A cowgirl.”

Daniel said about raising his children:

“I don’t want to miss my kids growing up.”

“I (also) do about five celebrity golf tournaments a year and then the rest of the time I just hang with my family here at the house.”

“Every day is a weekend.”

“The only reason I’m ever in character as ‘Larry The Cable Guy’ is because that’s what I’m hired to do.”

“I used to be a chick magnet. Now, I’m just a refrigerator magnet.”

“The bad thing about the internet when you’re a stand-up is that everybody comes at you.”

“I’m a cow kid, I’m a livestock kid, a horse guy… I hang out with people that talk like that.”

“I’ve only been to these foreign countries: Canada, L.A., and Miami.”

“Another thing you never hear at your family reunion: ‘Have you lost weight?’”

“I’ve never judged anybody by how they look or how they dress.”

One of his closest friends is Lewis Black, an American stand-up comedian, actor, social critic, playwright, and author.

His favorite comedians are:

Whitney developed his trademark Southern accent after listening to his college roommates.

He has created The Git-R-Done Foundation. The foundation has donated over 7 million dollars to various charities.

Larry said in an interview that he loves his job:

“I’m not a rocket scientist. I’m not out to change the world. I’m just a stand-up comedian; that’s my role.”

He is an avid Nebraska Cornhuskers football fan.

Larry the Cable Guy – Net Worth

Daniel earned most of his wealth from selling tickets to his shows, his book, and the 7 comedy albums that he published. Three of his albums have been certified gold by the RIAA for shipments of more than 500,000 copies.

As an actor, Larry is best known for the Cars series. He was also part of the successful Blue Collar Comedy Tour.

In September 2010, he donated $5 million to the Arnold Palmer Hospital for Children in Orlando. Forbes Magazine estimated his earnings at $20 million in 2007. Therefore, Larry the Cable Guy has an estimated net worth of $85 million.