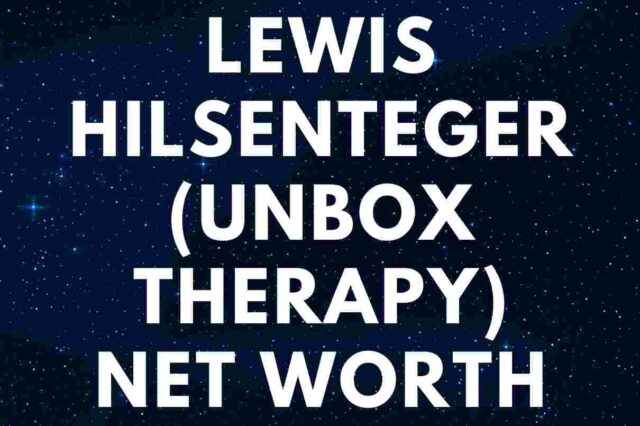 Lewis Hilsenteger is a Canadian YouTuber who gained fame as the owner of the YouTube channel ”Unbox Therapy,” where he unveils a wide range of tech and other products.

He was born on May 6, 1985, in Toronto, Ontario, Canada, as Lewis George Hilsenteger.

For a while, Lewis owned an Apple repair store close to Ryerson University.

”I’ve been enthusiastic about tech, gadgets, and that whole realm for as long as I’ve been alive,” he told Marco Pasqua from Huffington Post in 2016. ”I eventually found my way to starting a small business, a shop that specialized in doing upgrades, repairs, that sort of thing.”

On December 21, 2010, Lewis created his YouTube channel. According to his page’s description – ”here, you will find a variety of videos showcasing the coolest products on the planet.”

The majority of the videos on the channel focuses on Hilsenteger as he unboxes different gadgets and provides commentary on technology.

The content and community have grown up together, for that I’m grateful,” Lewis said for TubeFilter. He went on to say: ”To the fans, you guys are the coolest people on the planet; you’ve enabled me to live out my dream gig. I sincerely thank each and every one of you.”

”I think that getting started is the main thing regardless of what you have access to initially,” Lewis said when asked to provide advice for new YouTubers. ”If I sat around and waited for perfection, I never would have gotten anywhere.”

On October 17, 2015, Hilsenteger started a second channel, titled – ”Lew Later.” On this channel, Lewis uploads videos from his podcast.

”This is the biggest unboxing I have ever done! I was not aware of what was in the box until it was opened,” Lewis said. He added: ”I’m a huge Ford fan and am delighted to have unboxed the KA+.”

READ MORE: Who is Davie504’s girlfriend?

In 2009, Jack earned his BA in Psychology from Lakehead University. He has served as the Creative Director of Unbox Therapy since August 2014.

In February 2018, McCann’s face was revealed in a YouTube video titled “Jack.” One fan commented: ”The internet’s biggest mystery = solved.”

Lewis Hilsenteger is married, but no other details are known.

The couple has a son.

Hilsenteger earned most of his wealth from ads on his YouTube channels, sponsors, and selling merch.

Across all his YouTube channels, Lewis has over 4.6 billion views (meaning about $13 million in revenue before taxes) with videos that include reviewing the world’s first 360-degree unboxing and smartphone durability by using the devices as ice-hockey pucks.

In 2017, Oreo became a sponsor of Unbox Therapy. He was also sponsored by Insta360, Huawei, ASUS, Realme, and more.

READ THIS NEXT: Who is Jay Shetty?