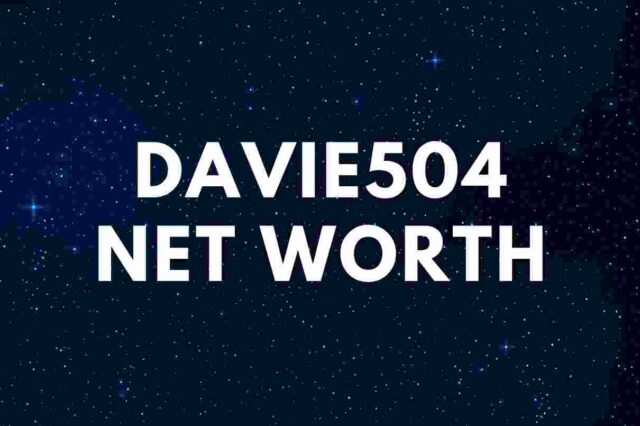 Davie504 (real name – Davide Biale) is an Italian musician and YouTuber who gained fame for his original bass compositions.

”Since that day, all my life turned around. I started a band with my friends, and my grades at school skyrocketed. I would pay more attention and do my homework in class, so at home, I could play bass all day. I stopped playing GTA, and I started taking bass lessons. Once I found something I am really passionate about, I will learn it very quickly, so I become quite good at bass in a short time.”

Biale created his YouTube channel on May 18, 2011. It has the following description: ”Italian guy who wants to share his passion for slapping the BASS.”

”I started YouTube when I was in high school,” Davide said in a Reddit AMA. He added: ”By the time I graduated, my YouTube channel was already going quite well, so I just kept doing that.”

At the time of writing, Davide YouTube channel has more than 10.5 million subscribers.

In early 2019, he went to the T-Series office to play PewDiePie’s song ”Bitch Lasagna” against them. At the time, the two YouTube channels were involved in a public battle for the top spot.

”I went to INDIA at T-Series office just to play Bitch Lasagna,” Davide tweeted. ”It’s not over yet. subscribe to Pewdiepie.”

In November 2019, Biale built a bass out of his YouTube Gold Play Button.

In April 2020, he bought 15 basses and gave them all away on YouTube. ”I’m going to all the music stores I can find, and I’m going to buy all the bass guitars that they have, and then I am going to give them all away to you,” he said. Davide continued: ”I’m afraid I won’t be able to pay for my water bill anymore.”

Davie504 is dating a Taiwanese girl, Drungayu. She also has a YouTube channel.

Davide said: ”My girlfriend, she has been supporting me behind the scenes for many, many years, even before my channel hit 100,000 subs. If my channel is successful today is also thanks to her.”

”Recording yourself and listening it back is a great way to improve your skills!”

”KISS was my main inspiration. I used to play GTA: San Andreas and fell in love with this song called Strutter.”

His signature bass guitar, in collaboration with Chowny, was released in 2017. It comes in Purple, Red, Green, Blue, and Black Burst finishes.

”When I was choosing my username on YouTube, I tried with Davie1, Davie2, Davie3, Davie4, until Davie503, and they were all taken,” Davide explained when asked about the meaning of 504 in his YouTube alias. ”Then, I tried Davie504, and it was finally available. That’s it. If you ask me this one more time, I will slap you. So try, leave a comment now.”

Biale earned most of his wealth from ads on his YouTube channel, selling merch, and Patreon.

On Patreon, Davide has about 1,100 patrons, with €1 being the lowest fee to become a member on his Patreon account.

On YouTube, Biale has over 1.7 billion views, meaning about $4 million in revenue before taxes.

Therefore, Italian YouTuber Davie504 has an estimated net worth of $3 million.

READ THIS NEXT: Who is Lirik?