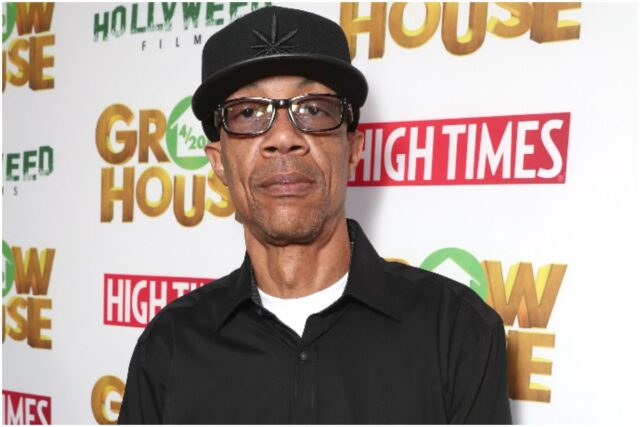 DJ Pooh (real name – Mark Jordan) is an American hip-hop master and producer who is best known for co-writing the indie film Friday. DJ Pooh has also written and directed ”3 Strikes.” Additionally, he has worked with the likes of LL Cool J, Snoop Dogg, Ice Cube, and Tupac Shakur.

He was born on June 29, 1969, in Kansas City, Missouri. Mark grew up listening to rap music and was a part of the scene in LA.

In 1986-1987, he provided production for LL Cool J’s second album called, ”Bigger and Deffer.” With more than 2 million copies sold in the US alone, this album stands as one of LL Cool J’s biggest career albums.

”Bigger and Deffer” contains the single “Go Cut Creator Go,” that paid homage to his DJ, and the breakthrough single in the U.K. “I’m Bad.” However, this album is best renowned for containing the 1st commercially rap ballad, titled – “I Need Love.”

In 1995, he has produced 2Pac’s “All Eyez on Me.” This album made history as the 1st ever hip-hop solo studio album which was released globally. ”All Eyez on Me” featured five singles in all, the most of any of 2Pac’s albums. In addition, it featured the Billboard Hot 100 number-one singles “California Love” and “How Do U Want It.”

In 1997, Pooh launched a solo career with Bad Newz Travels Fast, which was released on Atlantic Records.

In 1991, he made his debut in the film business by producing the drive-by shooting sequence in ”Boyz n the Hood” film. This American teen hood drama film follows Tre Styles, who is sent to live with his father Furious Styles in South Central LA, surrounded by the neighborhood’s booming gang culture.

It is directed and written by John Singleton (he was nominated for the Academy Award for Best Director for directing this movie) in his directorial debut, and stars Cuba Gooding Jr., Ice Cube, Larry Fishburne, Morris Chestnut, Regina King, Nia Long, and Angela Bassett.

In 1995, Pooh went on to help write the film called, ”Friday.” The film chronicles about 16 hours in the lives of unemployed friends Smokey and Craig Jones, who must pay a local drug dealer $200 by 10:00 p.m. It stars Chris Tucker and Ice Cube. It is directed by F. Gary Gray in his directorial debut.

In February 2017, Cube appeared on Drink Champs and talked about the possibility of a ”Last Friday.” In the same interview, when asked if Tucker will return, DJ Pooh responded:

“You know what? I don’t know. I think it’s gonna boil down to once we have a script.”

In 2019, Cube declared that the script for “Last Friday” film is done. Ice Cube said:

“Yeah, we pushing for it. We finished the script, we are getting notes from the studio and it’s going back and forth.”

”Get into pre-production and start hiring. It would be nice for this to come out on the 25th anniversary. That would be kinda … good.”

Moreover, DJ Pooh has written, directed, and produced his own films, which include ”The Wash” and ”3 Strikes.”

”The Wash” was released on November 16, 2001. It is a comedy film in which Snoop Dogg and Dr. Dre are starring, with appearances by Ludacris, Eminem, Daz Dillinger, Kurupt, Pauly Shore, and Xzibit.

The plot of ”3 Strikes” is focused on Rob as he evades the police until he can prove his innocence. Faizon Love, David Alan Grier, and N’Bushe Wright co-star. The film stars Brian Hooks as Rob Douglas, a man just released from a 12-month sentence in jail.

In 2017, Mark wrote and directed the film “The Grow House.” Stars include – Lil Duval, DeRay Davis, Faizon Love, Snoop Dogg, and Malcolm McDowell.”The Grow House” is a full-length urban comedy that is based on the world of Marijuana.

Pooh has been credited as writer and co-producer to the game Grand Theft Auto: San Andreas. On June 8, 2018, GTA was added to the Xbox One Backward Compatible library. It is the 1st main entry since 2002’s GTA: Vice City and the 7th title in the GTA series.

In 2015, a high-definition remastered version received a physical release for both PlayStation 3 and Xbox 360. The game was released on June 7, 2005, for Microsoft Windows and Xbox, and on October 26, 2004, for PlayStation 2. It is an action-adventure video game that was published by Rockstar Games and developed by Rockstar North.

Moreover, Pooh worked as the creative consultant on “GTA V” and co-writer of “Grand Theft Auto Online.” GTA Online is the online multiplayer mode of GTA V. It was released on November 18, 2014, for Xbox One and PlayStation 4, and on October 1, 2013, for Xbox 360 and PlayStation 3.

Mark also appeared in 3 episodes of ”The Boondocks.”

He plays all 3 “Mack” characters in the video for the Cube song “Who’s the Mack?” from AmeriKKKa’s Most Wanted. The album was mainly produced by Public Enemy’s production team The Bomb Squad. It was released on May 16, 1990, by Priority Records.

Pooh earned most of his wealth as a hip-hop master and producer for LL Cool J, Snoop Dogg, Ice Cube, and Tupac Shakur.

He has written, directed, and produced several movies including – Grow House, Friday, The Wash, and 3 Strikes as well as Grand Theft Auto: San Andreas.

Therefore, DJ Pooh has an estimated net worth of $14.5 million.

READ THIS NEXT: Who is Rachel Hollis?