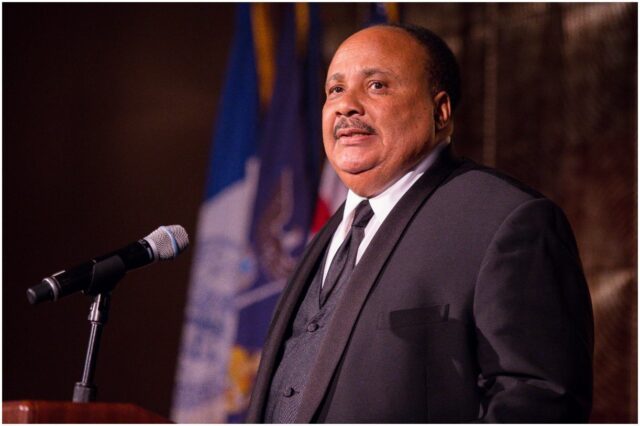 He was raised alongside a brother, Dexter, and two sisters, Bernice and Yolanda, in Atlanta, near the Ebenezer Baptist Church, where his grandfather and father preached.

His father, Martin Luther King Jr., was pastor of the Dexter Avenue Baptist Church in Montgomery, Alabama. He was the youngest man to have received the Nobel Peace Prize – at the age of 35.

”I would have to say that I was in a state of shock.”

”So more than anything, I was trying to get a hold on what was happening.”

In another interview, King said about Martin Luther King, Jr.:

”My father’s views were unequivocal, and I have found them to be invaluable to me as guidelines for prayerful consideration of current events and issues.”

In 1979, King received his B.A. degree in political science from Morehouse College.

On  November 1, 1997, he was voted as the head of the Southern Christian Leadership Conference (SCLC), an African-American civil rights organization.

In June 2001, The Southern Christian Leadership Conference suspended King III from the presidency. However, he was reinstated one week later.

He presented the ceremonial coin at Super Bowl XL on February 5, 2006.

King founded the nonprofit organization Realizing the Dream, Inc. in 2006.

He threw out the first pitch at the Major League Baseball Civil Rights Game on March 29, 2008.

On July 7, 2009, he gave a tribute at Michael Jackson’s memorial service.

He was awarded the Humanitarian Award by the Montreal Black Film Festival on September 29, 2015.

In 2017, Martin held a private meeting with Donald Trump on Monday.

”[Donald Trump] said that he is going to represent all Americans.”

Martin went on to say:

”He said that over and over again… I believe, that that’s his intent but I think also we have to consistently engage with pressure.”

In January 2020, Trump tweeted: ”African-American Unemployment is the LOWEST in the history of our country, by far. Also, best Poverty, Youth, and Employment numbers, ever.”

King III said on CNN: ”I think they’re always good words, but the question is: Is it actually documented and true?”

She spoke at the March for Our Lives demonstration in Washington at the age of 9.

”We are better, we can do better, we must, we’re a better nation than the behavior we see.” (WJLA)

”For every justice campaign, there was a policy initiative associated with it.”

”If we move forward with purpose, we will complete the work my father began in the 60s.”

”If we are to be a great democracy, we must all take an active role in our democracy.”

”The task is not done. The journey is not complete. We can, and we must do more.”

”I remember him as my dad, a man who loved his family and made an extra effort to give us quality time, when he was home.” (AARP)

In 2019, he proposed Texas to grant a reprieve to death row inmate Rodney Reed.

Martin was arrested on June 26, 1985, while taking part in a protest in Washington.

King earned most of his wealth from founding the company that manages the license of his father’s image and intellectual property as well as from serving as an elected county commission member in Fulton County. Therefore, Martin Luther King III has an estimated net worth of $1 million.

READ THIS NEXT: Who is Tati Westbrook?