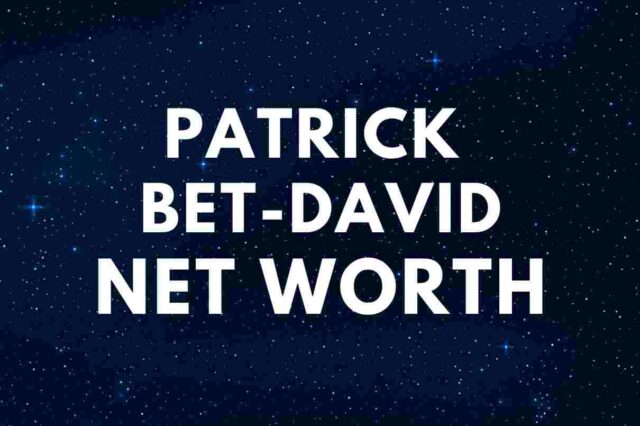 Patrick Bet-David is an Iranian-American entrepreneur who founded Valuetainment LLC, a company that creates videos focused on entrepreneurship.

His family moved to Erlangen, Germany, during the Iranian Revolution of 1978.

At age 12, Bet-David came with his family to the US. Patrick went to high school in Glendale, California.

”One of the best decisions I made in my life was joining the US Army,” he tweeted in November 2020. Patrick added: ”The Drill instructors & leaders of my unit helped turn this 18-year-old boy into a man!”

Later, he worked for Morgan Stanley and Transamerica Corporation. ”Most of the brokers were shocked that the branch manager, Dave Kirby, would give a 22-year-old kid with no degree and a lousy resume a job at Morgan Stanley,” he wrote on Facebook in 2016.

In July 2012, Bet-David published a book titled – ”The Next Perfect Storm.” In the book, Patrick details how someone who wants to serve can help others.

On June 14, 2016, he published another book entitled – ”The Life of an Entrepreneur in 90 Pages” via Valuetainment Publishing. In this book, he writes about the six important points on becoming a successful entrepreneur.

In 2017, Patrick released ”Drop Out And Get Schooled: The Case for Thinking Twice About College.” In the book, Bet-David explained why 70 percent of college students should drop out.

On August 18, 2020, he released another book, entitled – ”Your Next Five Moves: Master the Art of Business Strategy” via Gallery Books.

She serves as EVP of Operations at PHP Agency Inc.

”You obviously love the person you’re with, so it’s important to learn how to engage yourself into their passion and dreams,” Jennifer confessed in a video about being married to an entrepreneur.

”When making deals or deciding on contracts, a business leader needs to be the company’s best advocate.” (Entrepreneur)

”When you play loose & work your ass off you, you have nothing to be scared of.”

”Money & success don’t change people. It simply amplifies who you were the entire time.”

”I’m very comfortable knowing most people in the world lack the ability to reason logically rather reason emotionally.”

”Being frugal is good. Saving money is good. Not making emotional purchases is good.”

”Gratitude is a powerful virtue. It helps improve relationships.”

”Competition & innovation will always inspire a young CRAZY visionary who can’t comprehend the definition of impossible.”

”Preparation & effort accelerated your chances at reaching your potential.”

”Nothing matters unless you understand what makes you tick and who you want to be.” (CBS New York)

Here is a snippet of his interview with Kobe.

Besides English, he speaks German, Persian, Official Aramaic, and Armenian.

Bet-David earned most of his wealth from managing his companies – People Helping People and Valuetainment.

Valuetainment also has a YouTube channel with over 3.37 million subscribers and over 419 million views (meaning about $1.2 million in revenue before taxes).

In addition, he worked for Transamerica Corporation and Morgan Stanley.

Patrick also makes money from selling his books (The Next Perfect Storm, Drop Out And Get Schooled: The Case for Thinking Twice About College, The Life of an Entrepreneur in 90 Pages: There’s an Amazing Story Behind Every Amazing Story, Doing The Impossible: The 25 Laws for Doing The Impossible, and Your Next Five Moves: Master the Art of Business Strategy).

In 2021, he bought two properties which are in Fort Lauderdale and Oakland Park — totaling $8.6 million.

Therefore, Iranian-American entrepreneur Patrick Bet-David has an estimated net worth of $160 million.

READ THIS NEXT: Who is Hasan Minhaj?