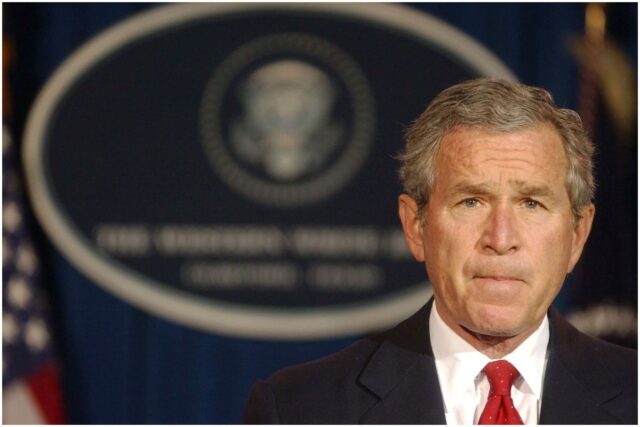 His father was the 41st US president from 1989 to 1993. At the time of his birth, George H. W. Bush was attending Yale University after service in WWII.

His grandfather, Prescott Bush, was a former progressive Republican senator.

In 1969, Bush received a bachelor’s degree in history from Yale University.

After college, he enlisted in the Air National Guard, serving in Alabama and Texas until his discharge in 1974.

In 1975, the future president earned a master’s degree in business administration from Harvard Business School.

In 1977, he started Arbusto Energy, a small oil exploration company. In 1984, Arbusto Energy merged with Spectrum 7 Energy Corp. After the merger, he became the CEO of Spectrum 7. Later, the company folded into HKN, Inc. Bush received a seat on the company’s board of directors, a job as a consultant to the company, and HKN stock.

In 1988, Bush served as a campaign advisor on his father’s campaign for the US presidency.

From 1989 to 1994, he served as managing general partner for the Texas Rangers baseball franchise.

In 1994, George W. Bush ran for the governor of Texas. His campaign focused on four themes:

In June 1999, he announced his candidacy for the Presidency of the United States. The 2000 presidential campaign was formally launched on June 14, 1999.

In 2004, Bush was re-elected to the White House. He was challenged in his re-election bid by Massachusetts Democratic Senator John Kerry. Bush began his second term by outlining a major initiative to reform social security.

After leaving the White House, he took up oil painting.

In 2010, George W. Bush published the book “Decision Points.” In about two months of release, the book sold over 2 million copies. Bush was paid $7 million for the first 1.5 million copies.

In 1977, George W. Bush married Laura Welch, a schoolteacher and librarian. He later detailed his choice to marry Laura as the “best decision of [his] life.”

George and Laura welcomed their twin daughters, Barbara and Jenna, in 1981.

READ MORE: Who is Stewie2k’s girlfriend?

”I am a passionate person when it comes to freedom.”

”I’m optimistic about the future because as you mentioned democracy is self-healing.”

”I view my time in politics as a chapter, not my life.” (Texas Monthly)

”Education has got to be the cornerstone of domestic policy.”

Shortly after his 40th birthday, George W. Bush gave up drinking alcohol. ”I realized that alcohol was beginning to crowd out my energies and could crowd, eventually, my affections for other people,” explained Bush. He credited his wife with his decision to stop drinking.

In 2002, he opened the Winter Olympics in Salt Lake City, Utah.

Bush earned most of his wealth from selling his shares in the Texas Rangers in 1998 for more than $15 million. Bush’s initial investment was around $800,000.

In addition, he has made tens of millions of dollars in a book deal and speaking fees since leaving office. He has authored several books, including:

Therefore, American politician George W. Bush has an estimated net worth of $40 million.

READ THIS NEXT: Who is Justin Kan?