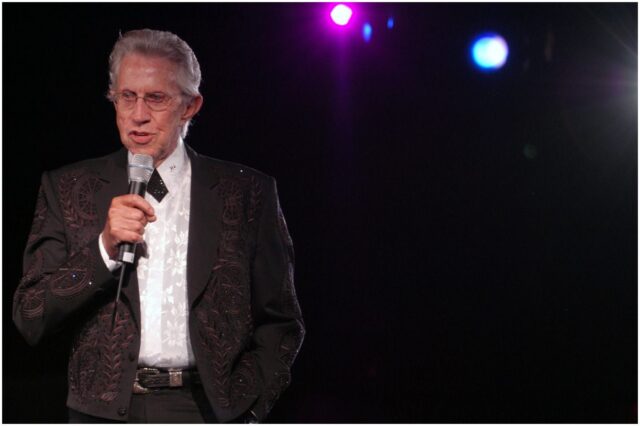 What was Porter Wagoner’s net worth at the time of his death?

Porter Wagoner (birth name – Porter Wayne Wagoner), nicknamed – the Thin Man from the West Plains, was an American country singer who is best known for his slick back Pompadour hairstyle and crisp suits.

One of his best singles is called “A Satisfied Mind.”

Wagoner and singer Dolly Parton were a well-known vocal duo throughout the late 1960s and early 1970s.

He was born on August 12, 1927, on a farm near West Plains, Missouri, in the Ozark mountains, to Charles E. Wagoner and Bertha May.

Throughout the late ’40s, Porter was singing on the local West Plains radio station.

In 1951, Wagoner was hired by American record producer Si Siman as a performer on KWTO in Springfield, Missouri.

Starting in 1955, Porter was a featured performer on ABC-TV’s Ozark Jubilee in Springfield, Missouri.

He released his final album called, Wagonmaster, on June 5, 2007.

Wagonmaster received the best reviews of Porter’s career. Additionally, a music video was produced for one of the tracks.

It was produced by Marty Stuart for the Anti- label.

During the summer of 2007, Wagoner toured to promote the album, including a late-July appearance on Late Show with David Letterman.

Moreover, at a sold-out concert at Madison Square Garden in NYC, Wagoner opened for the rock group The White Stripe.

After the concert, he declared:

“The young people I met backstage, some of them were 20 years old. They wanted to get my autograph and tell me they really liked me.”

“If only they knew how that made me feel— like a new breath of fresh air.”

On June 25, 2019, The NY Times Magazine listed Wagoner among the artists whose material was destroyed in the 2008 Universal fire.

Wagoner helped launch the career of American singer Dolly Parton after the singer replaced Norma Jean in the show’s cast in 1967.

On February 19, 1974, after more than 7 years together, Parton ended her long-standing partnership with Porter.

During an interview, Parton said:

“I was trying to get away on my own because I had promised to stay with Porter’s show for five years. I had been there for seven.”

She also revealed that things were often tense between them. The singer explained:

“I don’t mean this in a bad way … but he was very much a male chauvinist pig.”

Porter sued her for $3 million in assets, however, the two settled out of court in 1980.

“But it’s a fact that when you’re involved with attorneys and companies that have them on retainer, it makes a different story.”

”We got to be very close again. We had our big separation when we first left (each other), and there were a few years that went by, but I always loved Wagoner, and he always loved me.”

Dolly went on to say:

”As a matter of fact, I was with Porter when he died. I was with his children and him, a few hours before he passed.”

In 1943, Wagoner married Velma Johnson. They divorced in less than a year.

Wagoner has three children with his second wife. His children include daughters Denise and Debra, and his son Richard.

On July 14, 2006, Wagoner underwent surgery for an abdominal aneurysm.

On October 15, 2007, Porter was admitted to a Nashville area hospital and placed in intensive care in critical condition.

Parton went to Nashville hospital to visit him. The American singer described Wagoner as very weak, but said Porter “had his wits and joked around.”

Note – lung cancer is the leading cause of cancer death, regardless of ethnicity or gender. An estimated 230,000 Americans are diagnosed with lung cancer per year.

His funeral was held on November 1, 2007, at the Grand Ole Opry House.

After his death, Parton performed a concert at her theme park Dollywood in Porter’s memory.

Wagoner is buried at one of the largest cemeteries in Nashville – Woodlawn Memorial Park Cemetery.

”Back when I joined in 1957, I don’t know really how to explain it, it was just more authentic then.”

“I believe there is a different kind of beauty, the beauty of being honest, of being yourself, of singing like you feel it.”

In 1982, Wagoner appeared in the Clint Eastwood film Honkytonk Man, a musical drama film that was set in the Great Depression.

On May 19, 2007, the singer was honored at the Grand Ole Opry for both his 80th birthday and his 50 years of membership.

Wagoner got his first guitar from his older brother, Glenn.

In 2009, English singer Lily Allen used clips of Porter and his show in the music video for her song, “Not Fair.”

In 2002, he was elected to the Country Music Hall of Fame.

In 2004, the singer made a guest appearance on the HBO comedy series Da Ali G Show.

Wagoner Boulevard in his native West Plains, Missouri, is named in his honor.

Wagoner earned most of his wealth from selling copies of his albums, including – I’ll Keep on Lovin’ You, The Cold Hard Facts of Life, and more.

During his musical career, he placed 81 songs on the country music chart, 19 of which are duets with Dolly Parton.

In addition, Porter earned some money from his show, which remained on the air for 21 years, airing in around 200 markets. His show was viewed by more than 3.5 million viewers.

Therefore, at the time of his death, Porter Wagoner had an estimated net worth of about $11 million.

READ THIS NEXT: Dolores O’Riordan Death