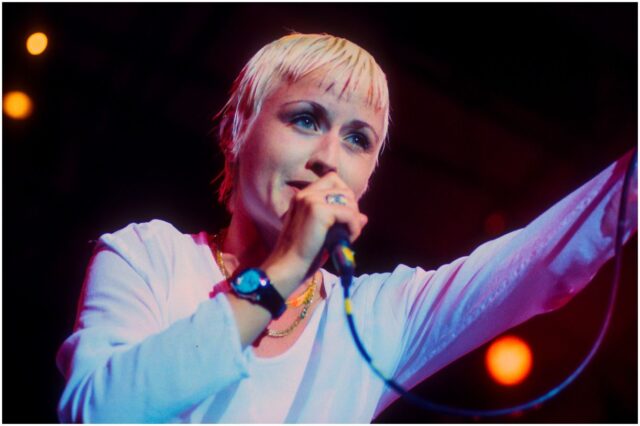 What was Dolores O’Riordan’s net worth at the time of her death?

Dolores O’Riordan was an Irish rock singer who is best known as the lead singer of the band The Cranberries.

She was born on September 6, 1971, in County Limerick, the Republic of Ireland.

Dolores was the youngest of Eileen and Terence O’Riordan’s seven children.

Her father, Terence Patrick “Terry” O’Riordan, was a farm laborer who was left unable to work due to brain damage which was caused by a motorbike accident.

O’Riordan had written her own songs since she was 12-years-old.

“I’ve been singing since I was five years old. By the time I was 12, I was writing my own songs so, yeah, music has always been part of me.”

Dolores joined The Cranberries – then called ‘The Cranberry Saw Us,” when she was a teenager, after spotting an advert for a female singer in a rock band.

During a 1995 interview for Rolling Stone, bandmate Noel Hogan said:

“Dolores came in with her keyboard, and she had really short hair, and she was very small.”

The first song The Cranberries wrote together, “Linger,” went on to become one of their best-known singles.

At some point, the band signed with Island Records, a record label that is owned by Universal Music Group.

As part of The Cranberries, Dolores contributed to the release of 5 albums, including:

They also released a greatest-hits compilation, Stars: The Best of 1992–2002.

After the Cranberries split in 2003, Dolores launched a fitful solo career which yielded two albums:

On August 25, 2009, Dolores announced the reunion with her band for a world tour.

On June 9, 2010, they performed at the Special Olympics opening ceremony.

In 2017, the band released “Something Else,” an acoustic album featuring some of the band’s most popular hits.

In April 2014, she joined and began recording new material with the trio D.A.R.K.

In 1994, Dolores O’Riordan married Don Burton, a famous Canadian Music Executive who is best known for his work as a tour manager of Duran Duran – one of the most successful English bands of the 1980s.

They had three children:

During an interview, O’Riordan described the importance of her children, saying:

“The best time in my life was the years spent at home with my family.”

On January 15, 2018, she was found unconscious in a bath at the Hilton hotel in Park Lane, London. O’Riordan was discovered when a housekeeping maid entered the room and found her submerged face-up in the bathtub wearing a long-sleeve vest and a pair of pajamas.

A Metropolitan Police spokesperson declared that the police were called to a hotel in Park Lane at 09:05 GMT on Monday, where “a woman in her mid-40s” was pronounced dead at the scene.

Later, the death of rock star Dolores O’Riordan has been ruled officially as an accidental death by drowning due to alcohol intoxication.

A bottle of champagne and five miniature bottles were found in the room along with containers of prescription drugs with several tablets inside.

Dolores, who was 46 when she died, was in London for a short recording session.

“Family members are devastated to hear the news and have requested privacy at this very difficult time.”

Duran Duran said that they were “crushed” following Dolores’ sudden death. They said:

“We are crushed to hear the news about the passing of Dolores O’Riordan. Our thoughts go out to her family at this terrible time.”

Her final public performance was on December 14, 2017, in NY at a holiday party for Billboard-Hollywood Reporter Media Group.

Nine days after Dolores’ cause of death was revealed, Noel Hogan confirmed that The Cranberries band name would be retired after the release of their 2019 album.

“We don’t want to continue without Dolores, so we’re just going to leave after this.”

In November 2014, she was arrested and charged in connection with air rage on an Aer Lingus flight from NY to Shannon.

At one point, her sister accidentally burned down the family home.

O’Riordan has performed live for Pope John Paul II at the Vatican twice.

In 2015, the singer had been diagnosed with bipolar disorder. Dolores said:

“There are two ends of the spectrum – you can get extremely depressed and dark and lose interest in the things you love to do, then you can get super manic.”

During the 2013/14 season, O’Riordan appeared as a judge on RTÉ’s The Voice of Ireland.

She made a cameo appearance in the Adam Sandler comedy Click, released on June 23, 2006.

O’Riordan was asked to both act in and compose music for Titanic, however, she refused both offers due to the birth of her son.

In 2005, O’Riordan appeared on the Jam & Spoon’s album Tripomatic Fairytales 3003 as a guest vocalist.

O’Riordan earned most of her wealth from being part of The Cranberries. The band released five albums and a greatest-hits compilation –  Stars – The Best, Wake Up and Smell the Coffee, Bury the Hatchet, To the Faithful Departed, No Need to Argue, and Everybody Else Is Doing It, So Why Can’t We?.

The Cranberries are Ireland’s 2nd-best-selling rock band after U2.

Dolores released two solo albums – No Baggage and Are You Listening?.

In addition, she was part of a band named -D.A.R.K.

Therefore, at the time of her death, musician Dolores O’Riordan had an estimated net worth of about $20 million.

READ MORE: Who is Kidd Kidd?