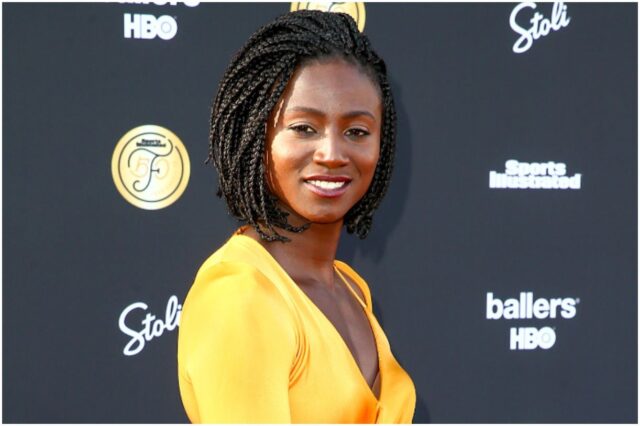 Tori Bowie (birth name – Frentorish Bowie) is an American track and field athlete who won a bronze medal in the 200m dash, a silver medal in the 100m dash, and a Gold medal in the 4x100m relay, at the 2016 Rio Olympics.

At age 2, Tori was left in foster care along with her younger sister, Tamarra. She said:

“My mother dropped us off at a foster care center when I was just two.”

Bobbie Smith, their paternal grandmother, was granted legal custody for both girls.

During an interview, Tori said about her grandmother:

“My grandmother told me a long time ago, ‘I don’t care if you’re sweeping a porch for a living. She said, you need to do your best.’”

In another interview, Bowie said about her grandma:

“My grandmother has been the role model in my life. She ended up fighting for us, got custody of us.”

Tori went on to say:

“We didn’t have much, but something she did give was character.”

She graduated from Pisgah High School. During high school, she began competing in track for the school.

Bowie went to the University of Mississippi on an athletic scholarship. There, she represented the school in NCAA Track & Field events.

Tori also became the first athlete from the University of Southern Mississippi to sweep the long jump NCAA titles at both the outdoor and indoor events in a single season.

At the 2013 USA Outdoor Track and Field Championships, she was a 100m semi-finalist. This was actually her first year as a professional track and field athlete.

She said about the 2016 Summer Olympics:

”I went there with high hopes of three gold medals and I left with gold from the relay, silver from the 100 and bronze from the 200.”

During a recent interview, Bowie declared:

“I always felt like I was the fastest, even though the results never showed it and I never got the gold medal.”

She won the gold medal in the 100-meter dash at the 2017 World Athletics Championships in London. Tori won with a .01 second margin of victory, in a time of 10.85 seconds. After her win, Tori said:

“I bet I’m the only person in the world who believed that I would come out here and win the 100 meters.”

In 2017, she modeled for Valentino in an issue of In Style magazine. In 2018, Tori was featured in ESPN’s Body Issue.

There are no reports regarding Tori Bowie’s past or current romantic relationships.

”I look at Rihanna’s collection, and I’m always in awe because there’s a shade that exists for every skin tone.” (source)

”Being a runner has brought me a lot of patience, and patience goes a long way in life.”

”Millrose was one of the fastest openers that I’ve ever had in my career.”

”I feel like doing my makeup before a race is part of my uniform.”

”I think we all have moments when we struggle with motivation.”

When asked by ESPN about what she likes about her body, she responded:

”Just being strong overall. I train my entire body to be strong. To be a professional athlete, we need every part to be strong – the core, the legs, arms.”

Her sister Tamara graduated from law school in 2018. Tamara once said:

“I follow her everywhere. I was that annoying little sister. Even when she went to college. I followed her there.”

In 2019, Tori was denied access to the Olympic Training Center in Chula Vista, California, due to an unpaid fee of about $6,000. She declared:

”I can’t train at the Olympic Training Center anymore because I haven’t paid $6000 that I didn’t even know I owed‍.”

When asked about the origins of her name (Frentorish), she stated:

”I don’t even know what my name means. I asked my dad: ‘why did you name me Frentorish?’ He said: ‘I wanted you to have a name that no one else had.’”

Bowie earned most of her wealth from being a professional track and field athlete. She mainly earns money from sponsors and the prize money from the competitions she participates in.

Additionally, she earned some money from the Stella McCartney x Adidas collaboration as well as being featured in Valentino’s 2018 Resort campaign. She said – ”Posing for the Valentino campaign was everything that I’ve ever dreamed of and more.”

Therefore, track and field athlete Tori Bowie has an estimated net worth of $500,000.

READ THIS NEXT: Jessie Armstead Salary