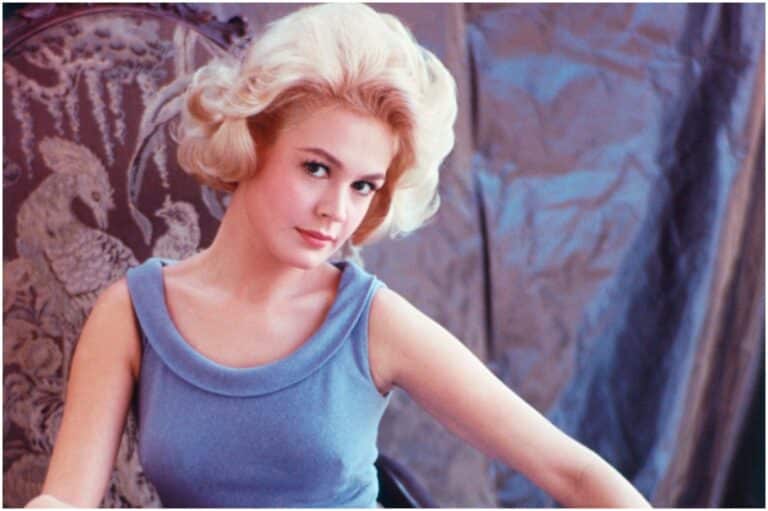 Sandra Dee, nicknamed – The Queen of Teens, was an American actress who became a teen idol for her roles in ”Tammy Tell Me True,” ”A Summer Place,” ”A Stranger in My Arms,” ”Gidget,” and ”Imitation of Life.”

She was a Golden Globe Award-winning American actress.

Dee was born on April 23, 1942, in Bayonne, New Jersey, the USA as Alexandra Cymboliak Zuck.

Note – there has been some dispute as to Sandra’s actual birth year, with evidence pointing to both 1942 and 1944.

Her parents divorced when she was a child. Sandra was brought up in the Russian Orthodox faith and lived with her mother.

”My mother fed me with a spoon until I was 6 years old.”

In 1957, Dee starred in her first film, titled – ”Until They Sail.” Other movie stars included – Piper Laurie, Paul Newman, Joan Fontaine, and Jean Simmons. The movie was directed by Robert Wise.

In the same year, she provided the voice for The Snow Queen.

In 1958, she graduated from Universal High School in Los Angeles, California.

In the follow-up year, Dee was cast as Pat Beasley in the drama film ”A Stranger in My Arms” alongside Jeff Chandler and June Allyson.

In the same year, she starred in another movie, entitled – ”Imitation of Life.” It was produced by Ross Hunter and directed by Douglas Sirk.

At the time, the movie was Universal Pictures’s highest-grossing film in history. It became a staple of both the Turner Classic Movies and American Movie Classics cable television networks.

”My first year and a half in Hollywood, I did three films.”

Dee went on to say:

In 1960, alongside John Saxon and Lana Turner, Sandra appeared in Universal’s Portrait in Black.

In 1961, Dee starred in Tammy Tell Me True, a comedy film that was directed by Harry Keller.

In 1963, Sandra was voted the 8th biggest star in the United States. In the same year, Sandra appeared in ”Tammy and the Doctor.”

On February 20, 2005, Sandra died of complications to kidney disease at the Los Robles Hospital & Medical Center in Thousand Oaks.

Sandra had been in the hospital for about 14 days and had been on dialysis for 4 years since she was diagnosed with kidney failure and throat cancer in 2000.

They met while filming Come September, which was released in 1961.

Although their marriage remained a secret for years, Dee and Darin appeared together in That Funny Feeling and If a Man Answers.

On March 7, 1967, the couple divorced, after Sandra suffered from an addiction to alcohol and pills.

After the divorce, she said:

“I had to tell Dodd [her son] that his father and I were two grown-ups who didn’t work out.”

”But there was no bitterness in me then although the end came after we suddenly discovered we no longer blended. We had six lovely years together–but the seventh year became an unhappy one…”

Following her divorce from Bobby Darin, she rarely acted.

Darin passed away at age 37 in 1973. Interestingly, he always had the feeling he would die young.

”There are constant cycles in history. There is loss, but it is always followed by regeneration. The tales of our elders who remember such cycles are very important to us now.”

”I’ve always had a problem saying what I feel for fear of having someone dislike me.”

In a 1991 interview, Sandra had admitted to weighing just 80 pounds by the late 1980s and drinking a quart of scotch a day.

“I took out an ad for Christ’s sake. And I ended up with the Jewish Sandra Dee.”

In 1994, her son published a book about Dee and Darin, titled – ”Dream Lovers: The Magnificent Shattered Lives of Bobby Darin and Sandra Dee.”

In the book, he chronicled that she had been sexually abused as a child by her stepfather, Eugene Douvan, as well as Sandra’s anorexia, alcohol, and drug problems.

Dee once said about her stepfather:

”While my mother was dating him, he began fondling me. After they got married, it got worse.”

In 2004, Sandra was portrayed by Kate Bosworth in “Beyond the Sea.” It depicts Bobby’s marriage to Sandra Dee as well as his rise to success in both the film and music industry during the 1950s and 1960s. “Beyond the Sea” movie was released just 2 months before Sandra’s death.

She appeared with John Saxon in 3 films:

Dee earned most of her wealth from acting in 33 movies. She became the “Queen of Teens” in 1950s Hollywood, appearing in films such as A Summer Place and Gidget.

For her performance in Robert Wise’s Until They Sail (1958), Sandra earned a Golden Globe Award.

READ THIS NEXT: The most-watched Australian actor in US – James O’Halloran