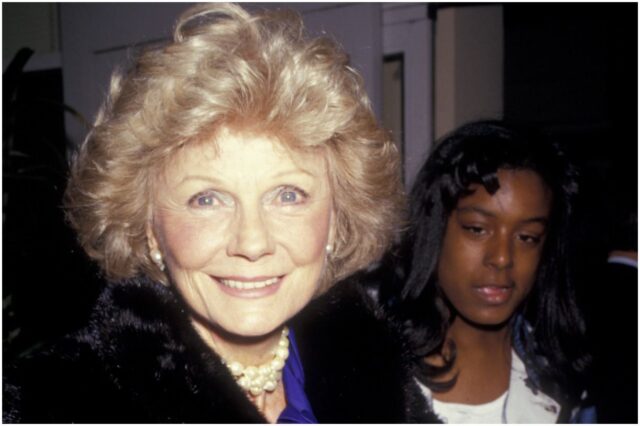 After her parents divorced when she was 4, Ms. Billingsley grew up in a single-parent home.

Her mother, Lillian Combes, worked in a sweater factory for many years.

In 1934, she graduated from George Washington High School in LA, California.

During the 1940s, Barbara had several uncredited roles in major motion pictures. During the 50s, she appeared in:

In 1956, she had a role in The Brothers (with Bob Sweeney and Gale Gordon).

In the follow-up year, Billingsley co-starred opposite Natalie Trundy and Dean Stockwell in a film titled – ”The Careless Years.”

In the same year, Barbara appeared on the series – ”Make Room for Daddy” in the episode “Danny’s Date.”

Also in 1957, Billingsley started her role on ”Leave It to Beaver” as everyday mother June Cleaver, alongside Hugh Beaumont and Tony Dow.

In 1983, Billingsley reprised her role as June Cleaver in the ”Leave It to Beaver” reunion television movie called – ”Still the Beaver.”

Billingsley retired from acting at age 87, after her final role on Secret Santa (2003).

On October 11, 1940, Barbara married Glenn Andrew Billingsley, a successful restaurateur. Barbara changed her name from Combes to Billingsley when she married Glenn. The couple divorced on February 13, 1947.

On November 15, 1953, Barbara Billingsley got married to Roy Kellino. They were married until November 18, 1956, when Roy died prematurely of a heart attack.

”Husband Roy died on a Saturday, while we were gardening.”

Barbara went on to say:

”The Thursday before, I was up for the part of the mother in a series Joe Connelly and Bob Mosher were working on. Then Roy died, and nothing came of that series.”

After the death of her second husband, Barbara married William Mortensen, a Santa Monica physician and widower, who was an old friend of the Kellinos.

Barbara was married to William Mortensen from 1959 to 1981 until Dr. Mortenson died.

“Our family after I married Dr. Bill turned out to be like the Cleavers.”

On October 16, 2010, Barbara had died of polymyalgia, at her home in Santa Monica, California, USA. Polymyalgia rheumatica is a condition that causes pain and stiffness in muscles.

“She was as happy as a lark being recognized as America’s mom.”

“She had a terrific life and had a wonderful impact on everybody she knew, and even people she didn’t know.”

“She will be missed by all of her family, friends, fans and most especially by me.”

Just three days after her passing, actor Tom Bosley also died. They both guest-starred on the final episode of – ”The Love Boat.”

”People stopped me on the street and said ‘I can’t live up to you.’ Of course, they’re referring to June Cleaver.”

”Don’t think your dreams don’t come true, because they do. You’d better be careful what you wish for.”

“Now some people, they just associate you with that one role [June Cleaver], and it makes it hard to do other things.”

”A long time ago, I played a lot of these roles that were seemingly nice, but underneath the character was really the murderer. So, I didn’t have to do a lot of research for this character.”

Her favorite television series to date was ”Leave It to Beaver.” During an interview, Barbara stated that her character was the “ideal mother.”

Barbara was a member of the Unity Church, a New Thought Christian organization.

Oprah Winfrey once said that Barbara was her childhood television heroine.

She appeared in guest roles on:

Before she became a successful actress, Barbara once worked with a magician.

Her idols were Jack Benny (an American comedian, violinist, film, and television actor, and vaudevillian) and Katharine Hepburn (an American stage and film actress).

Barbara was friends with many actors, actresses, and celebrities, including:

Billingsley earned most of her wealth from appearing in 95 movies and TV series. But, her most lucrative was – ”Leave It to Beaver.” She starred in the series for 6 seasons and 234 episodes.

Therefore, at the time of her death, Barbara Billingsley had an estimated net worth of $2.1 million.

READ THIS NEXT: Who is Stephen Furst?