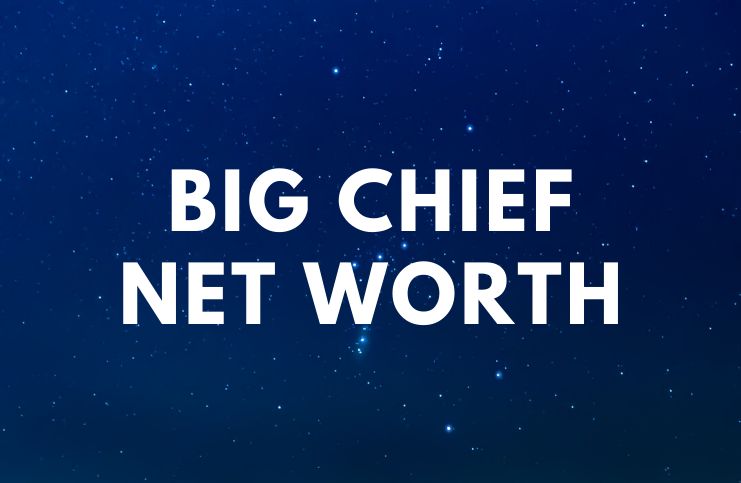 Shearer lost his dad when he was very young and was raised by his mother.

Justing said in an interview about his mother:

”She raised two mean ass kids by herself and went to school to be a nurse while working full-time and dealing with my crap.”

Chief went on to say:

”She is the superhero who saved my life.”

In 1992, Justin moved to Oklahoma. There, Chief found his love for street car racing. Soon he bought a 1972 Pontiac LeMans, that he nicknamed ”The Crow.”

Later, Justin turned the car into a pro-mod version that he named – ”The Crowmod.”

Since June 10, 2013, he started to appear on Street Outlaws, a reality TV series that provides an inside look into the street racing action both behind the scenes and on the road.

Street Outlaws was renewed for a 13th season which premiered on April 1, 2019.

On November 29, 2006, Big Chief got married to his longtime girlfriend, Allicia (birth name – Allicia Leigh Howard). He was just 18 years old when he met his wife for the first time at a full-service gas station. Shearer said in an interview about their first meeting:

”I met my wife Allicia when she came into the full-service gas station I worked at when I was 18 years old.”

”I instantly got nervous and I knew that I would have trouble with this girl, and I was right. I’ve been in trouble since that day!”

Allicia studied Respiratory Care at Oklahoma City Community College. She graduated in 2006 and became a specialized healthcare practitioner that is trained in pulmonary medicine. After college, Allicia worked at the Integris Southwest Medical Centre as a Respiratory Therapist.

The couple has two sons, Corvil and Corbin Shearer. On one of his Instagram posts, Shearer wrote about his children:

”These two boys don’t get the attention from me that they deserve.”

”I’m always chasing the next rush, that lower elapsed time, looking for the next 10hp, the huge mph numbers, the final round… and now more than ever in chasing the money it takes to win the races at higher levels than I’ve ever competed in.”

”It’s unfair to them that I have not grown up yet.”

In 2017, it was reported that they are getting divorced. He declared:

”It’s no secret obviously that me and Allicia, my wife of 10 years have been having trouble or whatever you want to call it.”

”Well, it is further than just having trouble, we are actually getting a divorce, and that is happening.”

Chief started to date Jackie Braasch, a motorsports racer and the daughter of a garage worker. Jackie has been racing since the age of 8. The first reports about their romantic relation appeared in 2017.

She said about her father:

”My dad has been involved in motorsports since he was young.”

Braasch went on to say:

”He started taking me to the track as a baby and always included me when working on or racing the cars.”

Justing confessed about his new relationship:

”Well, now what happened at past is something I don’t have control over.”

”But now I’m looking at my future, I have plans and Jackie is my future.”

”I have a great family, dream job, and my magnificent obsession is now my occupation.”

”I am no longer concerned with racing things. Only eating things and lifting things.”

On November 14, 2015, Justin got into an accident with Brian “Chucky” Davis. He suffered a damaged spinal cord, a broken collarbone, and pulmonary contusions. Later, Chief posted on Instagram:

”Crushed my L2 and L3 in my back, broken collarbone, and pretty beat up, but so thankful to be alive right now.”

”They got me on non-stop oxygen and another round of cat scans, and X-rays coming up. The surgeon doesn’t believe I will need a back operation anymore.”

His car was severely damaged. Chief uploaded a photo with the car on Instagram and wrote:

”The Crow sacrificed its life to save mine. I always knew that the car would keep me safe. My first car, my first love, my first addiction.”

”There may be more after you, but you will always be the first.”

JJ Da Boss is another popular street racer that appeared on ”Street Outlaws.”

When asked if he will be street racing his entire life, he responded:

”I don’t see a time in my life when I’ll ever stop street racing.”

”I’m not looking forward to stopping street racing or nothing like that, but we’ve always done other things with our cars.”

Shearer earns most of his wealth from appearing on Street Outlaws reality series as well as from participating in the car racing events. He once tweeted – ”I’m blessed that my racecar pays for this lifestyle! I ain’t rich, but lovin is what I got.” Therefore, Big Chief has an estimated net worth of $2.1 million.