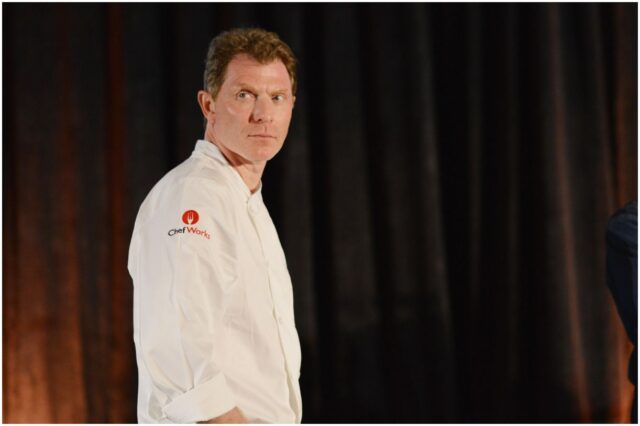 What is Bobby Flay’s net worth?

In 2000, Flay was nominated for an Emmy Award for ”Hot Off the Grill with Bobby Flay.”

From a young age, Bobby liked to make snacks after school and managed his mother’s grocery lists. His favorite childhood food was the cheese pizza at “Mimi’s Pizza” in NYC.

At age 17, Bobby fell into cooking when he took a job at Joe Allen’s restaurant, where his father was a partner.

In 1983, he received a degree in Culinary Arts from the French Culinary Institute.

In 1984, Flay worked with Jonathan Waxman (an American chef who was one of the pioneers of California cuisine) at Buds and Jams, where he first discovered the sweet-heat of Southwestern ingredients.

In 1991, he opened his first restaurant, Mesa Grill. In the same year, Flay won the James Beard Foundation’s Rising Star Chef of the Year award.

In 1992, his restaurant Mesa Grill adjudged NY Magazine Gael Greene’s Restaurant of the Year. In September 2013,  following a proposed rent increase by the landlord, the original Mesa Grill in NY closed.

In 1993, Bobby launched Bolo Bar & Restaurant along with a partner. In 1994, Bolo was awarded two stars by The New York Times.

On June 2, 2015, he received a star on the Hollywood Walk of Fame at 6141 Hollywood Boulevard in Hollywood, California.

In 1994, Flay made his first appearance on a then-fledgling Food Network.

He has hosted 14 cooking shows and specials on Food Network and Cooking Channel.

“Bobby Flay is a culinary superstar in every regard, and we are thrilled to be able to continue this extraordinary and productive partnership.”

“Bobby has a unique way of inviting audiences to experience food through the lens of his own passion. He’s both an expert as well as approachable, someone most people feel they know and can trust to steer their own culinary curiosities.”

Iron Chef America is an American cooking show based on Fuji Television’s Iron Chef. In a season of Iron Chef, Bobby would do 6 to eight battles a week.

In the early 2000s, Bobby competed against Masaharu Morimoto in two Iron Chef competitions. Flay lost the first battle but won the rematch.

During a taping of Iron Chef Showdown in 2017, Bobby pulled off his apron mid-battle to reveal a shirt reading:

“THIS IS MY LAST IRON CHEF BATTLE EVER.”

After the show, he declared:

On October 1, 1995, Flay married Kate Connelly. Bobby met Connelly in January 1994, when he appeared on her Food Network talk show.

The couple had a daughter named Sophie together before separating. Sophie was born on April 16, 1996.

On December 20, 2005, he married Stephanie March. He was introduced to Stephanie by acquaintance Mariska Hargitay.

March claims that Bobby’s alleged 3-year affair with Elyse Tirrell, one of his assistants, was the breaking point.

“We will continue to refrain from responding to the continued efforts by certain parties to spread rumors and innuendo. This specific allegation was in a letter sent from one attorney in this case to the other.”

After their divorce, Bobby was allowed to keep the couple’s Hamptons home and Manhattan apartment. At the same time, Stephanie was able to get about $5,000 per month in alimony, according to the pre-nuptial agreement.

Reports first emerged one year after Flay and Stephanie separated.

Both he and Giada rose to fame through their appearances on The Food Network.

Bobby’s chemistry with his Next Food Network Star (Giada De Laurentiis) cohost led people to speculate he was dating the chef, however, both denied those rumors. Giada even said:

He is fond of horse racing, and he owns a few race-winning horses.

In 2018, Flay appeared as Fred Jones’ uncle in the animated film ”Scooby-Doo! and the Gourmet Ghost.”

In October 2019, chef Ricardo Castro and chef Rosana Rivera were featured on his show. Rosana said:

“Being able to showcase our business, myself as a chef and the city of Tampa is a big deal for us and we’re super proud.”

Flay earned most of his wealth from his work on the Food Network, selling his books, and managing his restaurants.

Some of his books are – Barbecue Addiction, Grilling For Life, Fearless Flavors from My Kitchen, and Bold American Food.

Therefore, American chef Bobby Flay has an estimated net worth of $55 million.

READ THIS NEXT: Who is Peter Orszag?