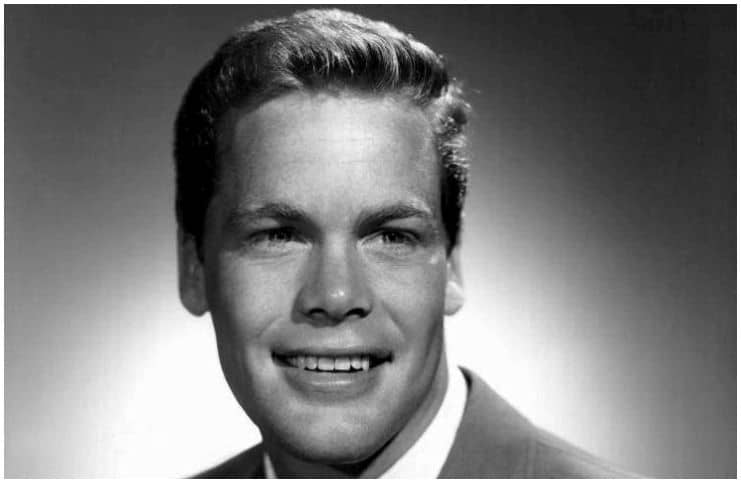 Doug McClure, nickname – Dougie, was an American actor who was the inspiration for The Simpsons character Troy McClure.

McClure starred in lead roles on Out of This World, Overland Trail, Checkmate, and as the cowboy Trampas on the NBC television series The Virginian.

He was born on May 11, 1935, in Glendale, California, the USA as Douglas Osborne McClure to an English mother and an Irish-American father.

As a teenager, McClure spent summers on a Nevada cattle ranch, where he was a bronco-buster in occasional rodeos.

In 1957, Doug had a minor role as an Army officer in “California Gold Rush in Reverse” on the syndicated anthology series Death Valley Days. The series was hosted by Stanley Andrews and sponsored by the Pacific Coast Borax Company.

In 1958 and 1959, he appeared in 3 episodes of the syndicated Western series 26 Men, stories of the Arizona Rangers.

His career rocket to fame in 1960 when he was cast in the NBC series “The Overland Trail” as William Bendix’s sidekick.

In 1962, Doug joined the cast of “The Virginian.” His co-stars throughout the television series were:

In 1967, Doug has played the Errol Flynn role in a remake of Against All Flags, named – ”The King’s Pirate,” with co-stars Guy Stockwell and Jill St. John. It was directed by Don Weis, an American film director who won two Directors Guild of America Awards for TV direction.

In 1971, he starred in ”The Law and Jake Wyler,” a movie that was written and produced by William Link and Richard Levinson.

In 1972-73, the American actor appeared in the high-tech spy series, titled – “Search.” The show was produced by Anthony Spinner, John Strong, and Robert Justman. It was created by Leslie Stevens.

In 1975-1976, Doug has co-starred with William Shatner, in the one-season series entitled – The Barbary Coast, as Cash Conover, a casino owner.

From 1987 to 1991, McClure starred in the fantasy sitcom Out of This World (an American fantasy sitcom about a teenage girl who is half alien) as Mayor Kyle Applegate.

“I had this feeling everybody thought I was dead. I didn’t quit. I did some films and theater in London.”

McClure went on to say:

”I went to New York. But I had been on television so much, people thought I wasn’t around.”

In 1994, Doug received a star on the Hollywood Walk of Fame.

In the same year, McClure had a cameo role as a poker player in the remake of Maverick.

Note – Maverick, the movie, was nominated for an Academy Award for Best Costume Design. It was released theatrically by Warner Bros. on May 20, 1994.

Maverick was both a commercial and critical success, having grossed more than $183 million worldwide. In this movie, Mel Gibson plays Bret Maverick, a con artist and a card player who collects money in order to enter a high-stakes poker game.

He had two children, daughters Tane and Valerie.

On February 5, 1995, McClure died in his suburban Sherman Oaks home (Los Angeles, California, USA) with friends and family by his side.

Doug was fighting lung cancer in the last couple of years before his death.

“We had thought he was getting better. And (toward the end) he was more concerned about his family than himself.”

In addition to his fifth wife, Diane Furnberg, Doug is survived by a brother, his mother, and two children.

McClure is interred at Woodlawn Memorial Cemetery, in Santa Monica.

”Told ya. Born lucky – lucky and handsome. And today I’m gonna be free.”

”Watching ‘The Sound of Music’ is like being beaten to death by a Hallmark card.”

”What you think of a name depends so much on the people you know by that name.”

”My Pa always said, Live fast, die laughing, that’s the way to do it.”

The character of Troy McClure on The Simpsons was modeled after Troy Donahue and Doug. As a joke, his daughters would call him Troy McClure behind.

McClure earned most of his wealth from starring in 102 movies. He is best remembered by the public for his role in The Virginian (1962) as “Trampas.”

Other film credits include – Tapeheads, Dark Before Dawn, Dead Man’s Revenge, Omega Syndrome, Maverick, 52 Pickup, Firebird 2015 AD, Cannonball Run II, Warlords of the Deep, Out of This World, and Humanoids From the Deep.

Therefore, at the time of his death, Doug McClure had an estimated net worth of about $15.8 million (in accordance with the current inflation).