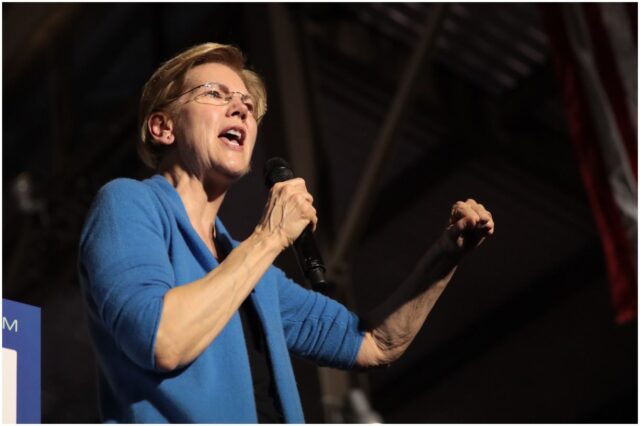 Elizabeth Warren (birth name – Elizabeth Ann Herring) is an American former law school professor and a politician who served as the senior US Senator from Massachusetts since 2013.

Warren was the first woman to be elected Senator of Massachusetts.

Her mother worked as a minimum wage employee at Sears, while her father was a maintenance man.

In 1970, she graduated from the University of Houston with a Bachelor of Science degree in speech pathology and audiology.

In 1976, Warren graduated from the Rutgers School of Law.

From 1983 to 1987, she was a professor of law at the University of Texas Law School in Austin.

From 1992 to 1993, Elizabeth served as the Robert Braucher Visiting Professor of Commercial Law at Harvard Law School.

In the mid-90s, Warren became involved with public work in consumer protection and bankruptcy regulation.

From 2006 to 2010, she was a member of the FDIC Advisory Committee on Economic Inclusion.

During the 2008 financial crisis, Elizabeth served as chairwoman of the Congressional Oversight Panel for the Troubled Asset Relief Program.

In May 2009, Warren was named one of Time Magazine’s 100 Most Influential People in the World.

In 2009, she appeared in Capitalism: A Love Story, a documentary film by Michael Moore.

In 2010, Warren was appointed the Special Adviser for the Consumer Financial Protection Bureau by Barack Obama.

On September 14, 2011, Warren officially announced her candidacy for Massachusetts Senate.

In November 2012, she won the U.S. Senate election in Massachusetts.

In the 2016 US presidential election, she endorsed Hillary Clinton. She called Donald Trump uncaring, dishonest and a loser.

On January 6, 2017, Elizabeth announced that she would be running for a second term as a US Senator from Massachusetts.

In the 2018 election, she defeated Republican nominee Geoff Diehl, 60 percent to 36 percent.

Later, Warren introduced legislation that offers more financial assistance to those buying insurance on the Obamacare marketplace and limits profits for insurance companies.

In January 2019, she criticized Donald Trump’s decision to withdraw American troops from Afghanistan and Syria.

In 2019, Warren announced her candidacy in the 2020 US presidential election.

She said for NBC News:

”It’s a very personal experience to run. Running for president can be thrilling but also very lonely.”

In October 2019, Elizabeth announced that her campaign would not accept contributions of over $200 from executives at pharmaceutical companies, fuel companies, hedge funds, private equity firms, large tech companies, or banks.

In the same year, she introduced a bill that would require public companies to carefully detail about their business in relation to climate change.

She wrote in her 2014 memoir about Bruce:

”A lot of people might think that two young law professors would be drawn together because they wanted to talk about law all the time.”

Elizabeth went on to say:

”Nope: I fell in love with Bruce because he had great legs.”

Elizabeth has 3 grandchildren through her daughter Amelia.

”Washington works for the wealthy and the well-connected.”

”My Medicare for All Plan is completely paid for without raising taxes on middle-class families by one penny. It’s paid for by asking the top 1% to pay a little more.” Source

”Day 1, I will sign a moratorium. No more drilling, no more mining on federal lands or national parks. No offshore drilling.”

”Second thing I’ll do is, I’m coming after the drug companies. The power has been there for a long time.”

Donald Trump has mocked Elizabeth for her assertions of Native American ancestry.

Warren has proposed a wealth tax on the wealthiest 75,000 families in the US. In addition, Warren lists over 45 plans for topics including ending Wall Street’s stranglehold on the economy,  reducing corporate influence at the Pentagon, foreign policy, climate change, clean energy, ending the opioid crisis, and universal child care.

She is a vocal opponent of the Trans-Pacific Partnership.

Warren earned most of her wealth from teaching at Harvard, working as a law firm consultant, her salary as a US senator, and royalties from her books.

She has written or co-written 11 books, including A Fighting Chance and The Two-Income Trap. From 2013 to 2018, Warren received $3.2 million in book advance payments from Macmillan Publishing Group.

She and her husband own two homes – an $800,000 condo in Washington and a house in Cambridge worth about $3 million. Therefore, former law professor and politician Elizabeth Warren has an estimated net worth of $12 million.

READ THIS NEXT: Who is Bethenny Frankel?