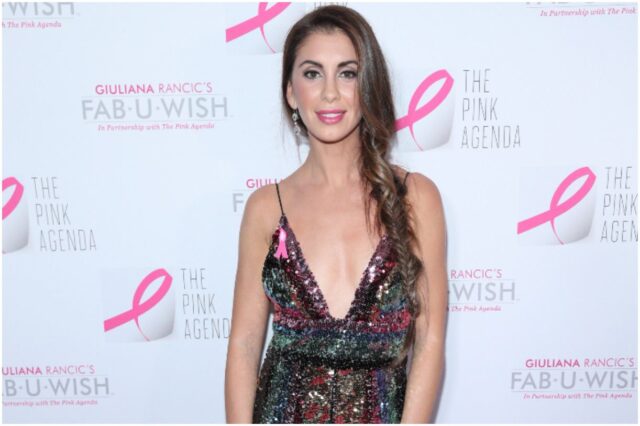 She’s also an attorney who holds multiple degrees, a children’s book author, and a mom-of-one.

Here’s what we know about the elegant, savvy celeb-wife.

She and her sister Marie Faye were raised in Greece by their parents Leonidas and Despina.

When it came time to go to college, Emilia jetted off to the UK for law school, specializing in maritime law.

When she met her future husband, real estate agent Ryan Serhant, she had a big choice to make: head to Geneva, Switzerland, to work as a lawyer for one of the world’s largest container lines—or stay in New York with her boyfriend.

She stayed, and the pair got married.

In February 2019, they welcomed their first child to the world—a little girl named Zena.

After turning her back on working in maritime law, the attorney of Greek heritage went to work for Commonwealth Land Title Insurance.

With a law degree from the University of Kent and experience in the legal department of the Mediterranean Shipping Company, she jumped at the chance to try something new.

Her role as a senior sales representative gave her that fresh challenge.

Emilia wasn’t always the bombshell she is now, in designer duds and photographed at red carpet events across the US.

She was a skinny kid and struggled to gain weight through her teens.

After moving to the Big Apple, she was inspired by NYC’s active culture.

She once stated in an interview that once she started seeing results, gained muscle, and didn’t lose too much weight, she was hooked on fitness.

She now works out regularly with a personal trainer at The Dogpound in New York City and also joins classes whenever she has the time.

Her favorites so far have been Pilates and spin.

Diet has never been something the svelte legal whiz has worried about, thanks to the eating habits her family and heritage instilled in her from an early age.

When she moved to the US, she struggled with the meat- and dairy-centric diet we enjoy—and eventually became vegan.

Her one guilty pleasure is Greek frozen yogurt from Mike and Dave’s.

They tied the knot in Corfu, Greece, at a 12th century Byzantine chapel that was once used by royalty.

A full 12-person choir and a string quartet serenaded the couple and their guests, and they observed all Emilia’s traditional Greek wedding customs.

Emilia’s dress, a champagne Romona Keveza dress with pearl beading, was accompanied by a dramatic full-length veil, while her husband rocked a blue and gray VK Nagrani tux.

After a seven-course meal and plenty of celebratory drinks, the guests danced the night away to a live band, a DJ, and a fireworks display.

All About The Kids

Emilia has made no secret of the couple’s struggle to conceive.

The couple tried for two years and eventually turned to IVF.

The treatment was difficult, but Bechrakis doesn’t regret a minute of it since it led her to her daughter.

Recently she released her first children’s book, which explores infertility and IVF in a child-friendly way.

The book—titled To the Moon and Back for You—tells the story of a woman who works hard to conceive her miracle baby without overcomplicating things for young minds.

Bechrakis has explained that she started penning notes and ideas while she was pregnant with Zena—including poetry dedicated to her miracle baby.

She spoke openly with other women throughout her pregnancy, too—women who had experienced their own challenges in conceiving.

Although the journey was a difficult—and long one—for Emilia and Ryan, the attorney and author is thankful for it.

She has shared that it helped her and her husband to bond and to find inner strength they didn’t know they possessed.

Because they rose to the challenge together, it made their relationship stronger and more trusting than ever.

Attorney Emilia Bechrakis has an estimated net worth of $1.5 million.

Want to keep up with the Bechrakis Serhants? You can do that on Instagram.

READ THIS NEXT: Who is Dr. Josh Axe?