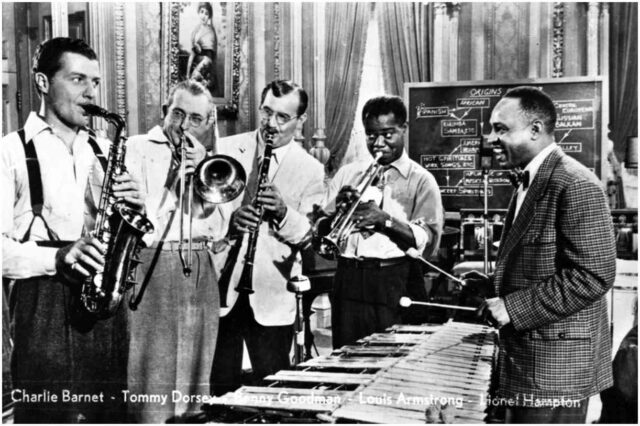 Here are several interesting facts about the trombone:

The trombone has been called multiple names, including tuba ductilis and dracht (draught) trumpet.

The 1st composer to create a symphony trombone part was Ludwig van Beethoven who included it in his famous “Fifth Symphony.” The modern symphony orchestra is made up of 2 or three tenor trombones and one bass trombone.

The word ”trombone” is derived from German and Italian words meaning “trumpet.”

The musical instrument can go from fast and technical passages from pieces like “Carnival of Venice” and “Blue Bells of Scotland” to smooth, sweet jazz ballads and peaceful slow melodies.

In 2012, the largest trombone ensemble was formed with over 360 trombonists playing 76 trombones around the edge of Washington national baseball field.

He was an American composer, jazz trombonist, and arranger.

On July 2, 1944, Johnson participated in producer Norman Granz’s first Jazz at the Philharmonic concerts in LA.

In the late 1950s, he composed the large-scale works Sketch for Trombone and Orchestra, El Camino Real, and Perceptions.

In the 2nd half of the 1960s, he traveled increasingly to Europe, where he worked with Friedrich Gulda, an Austrian composer and pianist who worked in both the jazz and classical fields.

On February 4, 2001, Johnson took his own life by shooting himself. In 1995, Johnson was voted into the DownBeat Hall of Fame.

He was a Danish-born American jazz composer and trombonist.

In 1940, Kai began his career as a professional trombonist with Shorty Allen’s band. In 1949, Winding participated in Birth of the Cool sessions, appearing on 4 of the 12 tracks.

During the 1960s, Kai began an association with producer Creed Taylor and Verve Records. In 1983, he died of a brain tumor in NYC.

He was an American jazz trombonist who took up the trombone at age 14 while he was enrolled at Miller High School.

Rosolino joined the army at 18 and played with service bands both in the Philippines and the United States.

Frank also played in a few big bands after his discharge from the army, among them Glen Gray, Bob Chester, Tony Pastor, Gene Krupa, Georgie Auld, and Herbie Fields. Additionally, Rosolino played with Charlie Parker in the 3 Deuces on 52nd Street in NYC.

Frank shot both of his sons as they slept on November 26, 1978. One survived but was blinded, while the other died instantly. Frank shot himself in the head immediately after shooting his sons and died.

He is an English musician who has held positions as Principal Trombone with the London Symphony Orchestra (the oldest of London’s symphony orchestras), the Vienna Philharmonic Orchestra, and the Hallé Orchestra.

In 1985, Ian played the first British performance of Gunther Schuller’s trombone concerto, with the Halle Orchestra conducted by the composer.

In 1992, Bousfield was appointed as a professor of trombone at the Royal Academy of Music.

In 2000, he became Principal Trombone of the Vienna Philharmonic/Vienna State Opera.

In September 2008, Ian gave a few performances of Nino Rota’s Trombone Concerto with the Vienna Philharmonic.

He was an American jazz trombonist who devoted most of his career to playing music in Las Vegas.

In 1951, Fontana got his first break into the professional jazz scene when he was hired to stand in for one of Woody Herman’s regular trombonists.

In 1978, Fontana recorded live at Donte’s in North Hollywood, and his solos on “I Got Rhythm” and “Strike up the Band” showcase his total mastery of the doodle-tonguing technique.

After suffering from Alzheimer’s disease, he died in Las Vegas at the age of 75 on October 9, 2003.

Wycliffe Gordon, nicknamed “Pinecone,” is an American arranger, composer, jazz trombonist, music educator at the collegiate-conservatory level, and bandleader. While listening to jazz records inherited from his great-aunt, Gordon took an interest in jazz in 1980 when he was 13.

In 1995, Wycliffe orchestrated and arranged the theme song for NPR’s All Things Considered.

In 2016 and 2017, Wycliffe has gained more worldwide popularity, being featured in South Australia’s Generations In Jazz, playing alongside artists like Jazzmeia Horn, James Morrison, Ross Irwin, and Gordon Goodwin.

He is a Swedish conductor, trombonist, and composer. By age 18, Lindberg had obtained a professional position in the Royal Swedish Opera Orchestra. At age 20, Christian left his orchestral career behind to study to become a full-time soloist.

Since 2016, he is a conductor and music director at the Israel Netanya Kibbutz Orchestra.

Lindberg is currently the principal conductor of the Arctic Philharmonic Orchestra.

He was a bandleader, trombone virtuoso, and soloist with the Sousa Band. Arthur composed around 300 works, including novelties, marches, three light operas – Uncle Tom’s Cabin, Jinga Boo, and On the Eve of Her Wedding Day.

Pryor was the son of Samuel Pryor, founder of the original Pryor band, and his wife.

At age 22, Arthur played his first solo with the Sousa Band during the 1893 World’s Columbian Exposition in Chicago.

In 1904, Pryor made his 1st appearance in Asbury Park, New Jersey, at the Shore, where he continued to play until 1930.

He is a classical trombonist who is presently a teacher/clinician, soloist, and recording artist, as well as the Principal Trombone of the New York Philharmonic Orchestra.

He was an American composer, jazz trombonist, bandleader, and conductor, who was known as the “Sentimental Gentleman of Swing” due to his smooth-toned trombone playing.

READ THIS NEXT: Top Celebrities That Play WoW (World of Warcraft)