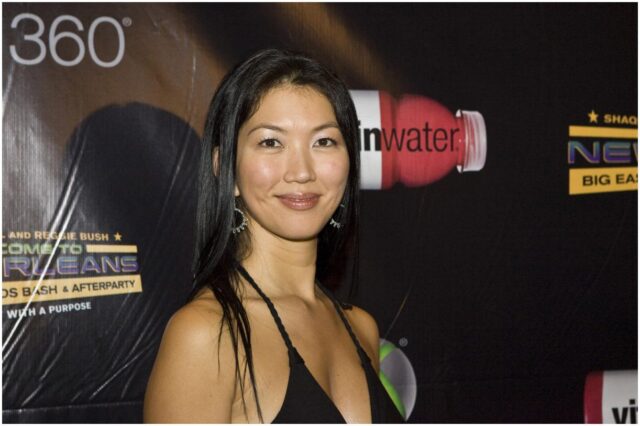 Jeanette Lee (birth name – Lee Jin-Hee), nicknamed the Black Widow (wears only black during tournaments), is an American professional pool player who is best known for her Gold medal-winning performance at the 2001 World Games.

Lee has earned Player of the Year honors from both “Pool and Billiard” and “Billiards Digest.”

As an adolescent, Lee was accepted into the prestigious Bronx High School of Science.

In 1994, she already was voted WPBA Player of the Year.

From 1993 to 1996, Jeanette was three times runner-up at the World Nine-ball Championships (women’s).

In 1998, she was named WPBA Sportsperson of the Year.

In the follow-up year, she won the ladies’ US$25,000 winner-take-all Tournament of Champions. Jeanette won it again in 2003.

In the same year, Lee won the gold medal for the US at the World Games in Akita, Japan.

In 2004, she won the World Trick Shot Championships and BCA Open.

In 2006, Jeanette was inducted into the Women’s Professional Billiard Association Hall of Fame.

During an interview, Lee said:

“Being inducted into the WPBA Hall of Fame is one of the greatest honors a player can receive.”

In 2007, she was inducted into Pool & Billiard Magazine Fans’ Top 20 Favorite Players.

On March 30, 2008, Lee appeared on Fox Sports Net’s Sport Science, where she pocketed 12 balls in one trick shot.

In February 2021, it was reported that Lee was diagnosed with terminal cancer. “The cancer has fully metastasized into her lymph nodes and the prognosis is dire,” said her family in a statement.

“I’ve got beautiful children and so much to look forward to,” she said in early 2022.

On June 6, 2000, Jeanette penned a memoir called – ”The Black Widow’s Guide to Killer Pool.” The book can help the reader become an excellent pool player.

She and her husband raised three daughters, a foster son, and two children from George’s previous relationship.

Jeanette once said about her children:

”I’ve always loved children and I still do.”

”I wanted a future in helping nurture their minds and hopefully always make a difference in a positive way.”

A part of the money raised through her organization is donated to The National Scoliosis Association.

”My biggest turn-off is definitely foul language. Even though I’m from New York and hear it all the time, it bugs me.”

”I think trying to balance my life between my children, my business career, my love for pool, and my health.”

“It’s not about gambling or winning this tournament or that one. It’s greater than that. It’s about the journey.”

”When you’re not feeling it, FAKE it! It’s the best chance you have to stay out of your own way!”

She is also the official spokesperson for the American Poolplayers Association. She said:

“APA Pool Leagues are a great way for people who may have never played the game to get involved in the sport.”

When asked about who dubbed her “The Black Widow,” she responded:

”The owner of the Howard Beach Billiard Club in Brooklyn, Gabe Viggarito, said that I looked like a black widow because I was always dressed in black and I would lure my opponents to the table and then eat them alive.”

Among her mentors are:

During an interview, Lee confessed:

“There are so many others that I have learned from, I want them all to know they were and are appreciated but these names are the ones that I have spent the most time with.”

Jeanette was diagnosed with scoliosis when she was 13 years old. She has steel rods implanted in her back. Lee said:

”I was told that my back was crooked, and my doctor was going to straighten it. It seemed pretty simple.”

”Two days later, I went into surgery and woke up in a living hell. Implanted in my back were two 18-inch Harrington rods.”

She currently serves as the national spokesperson for the Scoliosis Association.

READ MORE: What is the net worth of Scump?

Lee earned most of her wealth from being a professional pool player. For instance, Jeanette was ranked one of the Most Powerful People in the Sport by Billiards Digest in four years – 2001, 2003, 2005, and 2007.

Therefore, professional pool player Jeanette Lee has an estimated net worth of $5 million.