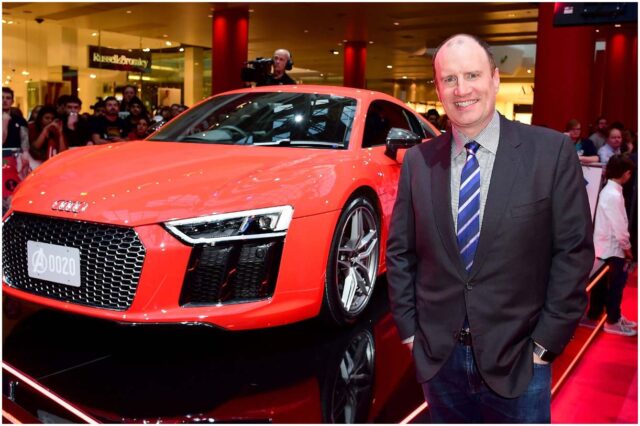 Kevin Feige is an American film producer who worked on several comic book films such as Iron Man, Guardians of the Galaxy, Avengers, and X-Men.

In 2007, he became President of Production at Marvel Studios.

He was born on June 2, 1973, in Boston, Massachusetts, USA. Feige was raised in New Jersey.

His grandfather was a TV producer in the 1950s, working on soap operas.

After high school, he was accepted at the University of Southern California School of Cinematic Arts on his sixth application. He said:

”I applied every semester, basically, until I got in.”

His first job was as an assistant to American film producer Lauren Shuler Donner on You’ve Got Mail (a TV soap opera that holds the Guinness World Records as the longest-running drama in television) and Volcano (a disaster film directed by Mick Jackson).

In 2000, Feige was hired by Marvel as a producer. He worked on Fantastic Four, Blade Trinity, Hulk, and X-Men.

In March 2007, Feige was appointed Marvel Studios’ President of Production.

One of his first decisions as the President of Marvel was to cast Robert Downey Jr as Iron Man in the first film produced by Marvel as a standalone studio.

”Literally, the first decision I made and was allowed to make and allowed to try to pursue as president of Marvel Studios was casting Robert Downey Jr.”

Forge went on to say:

”I remember speaking to the marketing team at Paramount, because Paramount released, saying that if we did our job, Tony Stark will be as famous as Iron Man.”

In 2019, Forge was nominated for the Academy Award for Best Picture for producing Black Panther. In an interview with the LA Times, Forge stated:

”He had a vision and personal questions he’d been dealing with his whole life that he decided to use this film and this story as his canvas to tell.”

On July 21, 2019, his latest production, Avengers: Endgame, became the highest-grossing film of all time. As of February 2020, Avengers: Endgame grossed over $2,797,000,000 worldwide. Feige told IGN during an interview at Comic-Con:

”We had a movie this year called Avengers: Endgame and it is very much an ending.”

In October 2019, he was named Chief Creative Officer for Marvel Comics, Marvel Television, and Marvel Animation. In this new position, he will oversee the overall creation of Marvel related-projects, including animation, television, and comics.

In December 2019, Kevin confessed that planning for the next Avengers movie started. In his words:

”Then, yes, it is always fun to see them come together in a master plan. Which is, I promise you well underway.”

In 2021, Feige served as the executive producer of WandaVision.

In 2019, he was awarded the David O. Selznick Achievement Award in Theatrical Motion Pictures by the Producers Guild of America.

”The fact that he’ll still have his baseball cap and his sneakers on and a sports jacket thrown over a Marvel or Disney T-shirt.”

”If you didn’t know any better, you’d think he’s just another fanboy.”

On February 22, 2013, he received the Motion Picture Showman of the Year award at the ICG Publicists Guild Awards.

He earned most of his wealth from working for Marvel. Kevin is an executive producer on She-Hulk, Moon Knight, I Am Groot, X-Men: The Last Stand, Agent Carter, Ms. Marvel, The Falcon and the Winter Soldier, Hawkeye, What If…?, Loki, and WandaVision.

Feige is the co-producer for Deadpool and X2: X-Men United.

The films Feige has produced have a combined worldwide box office gross of more than $26.8 billion.

Therefore, Kevin Feige has an estimated net worth of $200 million.

READ THIS NEXT: Who is Linus Sebastian?