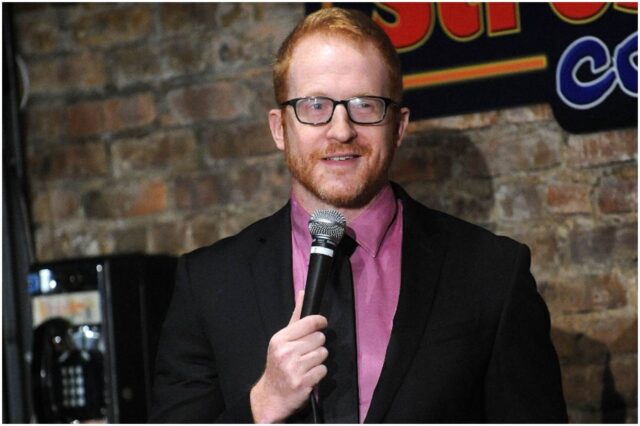 Steve Hofstetter is an American comedian and YouTuber who is famous for his YouTube comedy channel, which features his popular “Heckler Destroyer” video.

He is also renowned for producing the Laughs stand-up comedy program on the Fox network.

His live comedy albums have ranked #1 on iTunes’s comedy as well as in Billboard’s Top 20 in comedy charts. Furthermore, Hofstetter has been featured by local news programs in Miami, Tulsa, Louisville, Atlanta, and Boston.

Moreover, Hofstetter is the host and executive producer of Finding Babe Ruth on FS1 and Laughs on FOX.

In 1997, Steve finished his high school education at Hunter College High School, a secondary school that is located in the Carnegie Hill neighborhood.

During his college years, Steve also landed a writing gig as a columnist for a comedy website based in LA, called – collegehumor.com.

After university, he had a career as a comedian in LA.

In March 2006, Razor & Tie and Steve Hofstetter announced the release of” Cure for the Cable Guy,” a 45-minute CD/DVD which featured a cover with a Larry the Cable Guy Doll hanging by a coax cable.

“Hofstetter effectively rebels against the mainstream by positioning himself as the antithesis of the world’s most popular comedian. What could be more punk rock than that?”

In December 2007, Steve announced his new album, titled -” Dark Side of the Room.”

On his channel, Steve tapes his stand-up comedy shows to prove they are not edited. During an interview, Hofstetter said:

“People like seeing other people get what they deserve … You can’t fake a heckler clip.”

Steve went on to say:

”People are excited to see someone who’s ruining everyone else’s time get their comeuppance.”

READ MORE: Who is SnewJ dating?

On December 19, 2010, Steve Hofstetter got married to Sara Tenenbein. Sara has a master’s degree in business from the University of Pennsylvania. In addition, Sara is an MIT graduate.

The couple met for the first time on Jdate, an online dating service that is aimed at Jewish singles. The app was founded in 1997 by Joe Shapira and Alon Carmel. While this online dating service is oriented towards the Jewish population, Jdate has also attracted people seeking Jewish mates.

Hofstetter proposed to Sara Tenenbein 51 days after their first date.

“I signed up on JDate to meet some new people and go out on a few dates.”

”I never expected anything serious would come of it.”

His wife featured in several of his YouTube comedy videos.

”Thanks, but divorce is not always a bad thing. We’re both happy.”

On March 20, 2018, he published –” Ginger Kid: Mostly True Tales from a Former Nerd.” In this book, Hofstetter takes his readers through the revenge of the bullied nerds, family turbulence, and an awkward early dating.

He has published other books as well:

“You have to earn [success]; funny is unlimited. The trick is to figure out why your commodity is a resource. Funny is not oil, funny is corn.”

“[At one point,] I had a show that was a really bad environment. There was no way of winning. I was doing hacky material, and no one was laughing. [I realized], if I didn’t do hacky material and no one laughed, at least I would have said what I wanted to say.”

” As long as you learn something from a mistake, it’s not truly a mistake.”

READ MORE: Who is Alessandro Michele?

In 2016, Steve was invited to the Joe Rogan Experience podcast.

Steve is an avid supporter of the New York Mets.

Hofstetter had an amazing appearance on” The Late Late Show with Craig Ferguson.” Ferguson is a late-night talk host and comedian who was born in Scotland. In 2017, Ferguson released a web show with his wife, called -” Couple Thinkers.”

Hofstetter earned most of his wealth from selling tickets to his shows, selling his books, advertisements on his YouTube channel (around $600k), and working as an executive producer.

In addition, he sells merch (hoods, t-shirts, accessories) on teespring.com/stores/stevehofstetter.

Therefore, stand-up comedian Steve Hofstetter has an estimated net worth of $2 million.

READ THIS NEXT: Is Michael Braxton married?