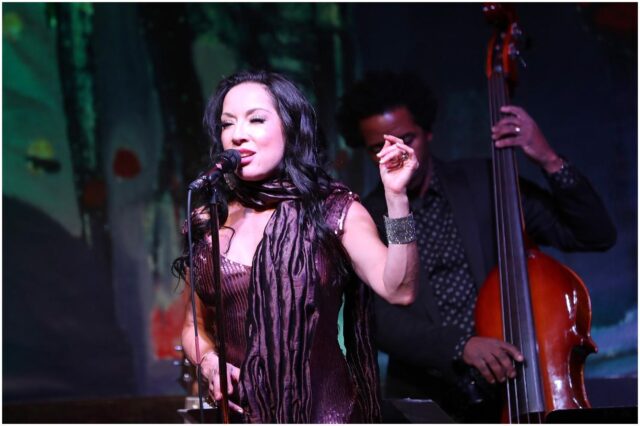 What is Margo Rey’s net worth?

Margo Rey is a Mexican actress and singer-songwriter who describes her music as “organica,” an unorthodox hybrid of pop music that is rooted in Jazz with deep ethno-rhythmic grooves, textural guitars, keys, and lush vocals.

She was born on October 18, 1966, in Acapulco, Mexico. When she was two, the family moved to Fort Worth, Texas. Rey grew up alongside her four siblings.

As a teenager, Margo was the lead vocalist in Debutante, an all-female rock band from Arlington.

After gaining a large following through her association with Debutante, Margo went on to sing with many different bands, including Miss Margo & the Lost Souls.

In 1998, actor Edward James Olmos heard Margo sing and recommended her for a main role in the bound-for-Broadway musical Selena Forever.

In 2009, Rey released her album ”My Heart’s Desire.” The album featured many singles, including “Between Us,” “My Heart’s Desire,” “Couldn’t Be More Wrong,” and “You Belong to Me.”

The singer also appeared as a guest on the Dr. Phil show (an American tabloid talk show created by Oprah Winfrey and the host Phil McGraw), where she performed ”Between Us.”

”My Heart’s Desire” received the 2009 Muse’s Muse Award for Best Overall CD Project In Any Category.

In 2011, she released a Christmas EP, named ”This Holiday Night,” that appeared in the Top 20 of the Billboard Adult Contemporary charts.

At the end of 2011, Margo’s song “Let The Rain,” that she co-wrote with John Oates (an American R&B, rock, and soul singer, guitarist, record producer, and songwriter best known as half of the rock and soul duo, Hall & Oates), remained on the charts for 21 weeks, peaking at No. 17 on Billboard magazine’s Adult Contemporary chart.

In 2012, Margo accompanied Dave Koz (an American smooth jazz saxophonist) as a guest singer on his “Dave Koz and Friends Christmas Tour 2012” tour between Thanksgiving and Christmas.

In August of 2009, she was diagnosed with breast cancer. Rey stated:

“I had never been hospitalized, broken a bone or had a cavity. It was really quite shocking.”

Since then, Margo has been working to raise awareness about the disease and raise funds for cancer research.

In January 2013, cancer returned to her lymph nodes (important for the proper functioning of the immune system, acting as filters for cancer cells and foreign particles).

The couple exchanged vows in front of close friends and family, including John Oates at the Fairmont Hotel.

She wore a strapless white gown, and instead of an intricate updo, Margo’s hair was cropped short – a side-effect of the radiation and chemotherapy (a type of cancer treatment that uses one or more anti-cancer drugs as part of a standardized chemotherapy regimen) she underwent as she battled cancer for the second time.

In 2017, she filed divorce docs in Los Angeles, saying they’d been separated for several months. They have no children.

Rey says she wants White to pay spousal support. It’s likely she raised the common law issue (once established, a common-law marriage has the same legal effect as a ceremonial marriage), so the marriage would pre-date 2013 by five years, hence, entitling her to more spousal support.

On August 6, 2019, a judge declared the couple was in a common-law marriage under Texas law.

Some of Rey’s songs are:

Margo calls her style of music “Organica,” a type of music that deals with natural, percussion, acoustic-based instruments.

Her dance single “Habit” reached number 1 on the Perfect Beat Dance Charts after debuting in the top 10, surpassing RuPaul and Lady Gaga.

Her mother Juana-Amparo Jurado was a Flamenco dancer and her father Alejandro Reymundo was a cliff diver.

In the late ’90s, actor Edward James Olmos recommended Margo for the role of Selena’s mother, Marcella, in the Broadway production of ”Selena Forever,” which was based on the life of the late Tejano pop star.

In 2018, she made a special appearance at Fox Hollow Elementary School’s annual choir concert. The school director said:

“This is an incredible opportunity for our students! They are beyond excited for Rey’s visit and we can’t wait to welcome her on stage to sing “This Holiday Night” with us,” said Becky Rhodes, the director of Fox Hollow’s after-school choir.”

She currently lives in the United States (LA), where she writes, records, and tours.

She is a Libra. People born under the sign of Libra are gentle, kind, and lovers of harmony, beauty, and peace.

Libras have a pleasing manner and are acutely sensitive to what is appropriate and proper in dealing with others. Difficult traits of the Libra sign include:

Rey earns most of her income from selling copies of her albums, merch sales, royalties, and selling tickets to her concerts.

Therefore, Mexican singer Margo Rey has an estimated net worth of $1 million.

READ THIS NEXT: Quotes by Vin Rock