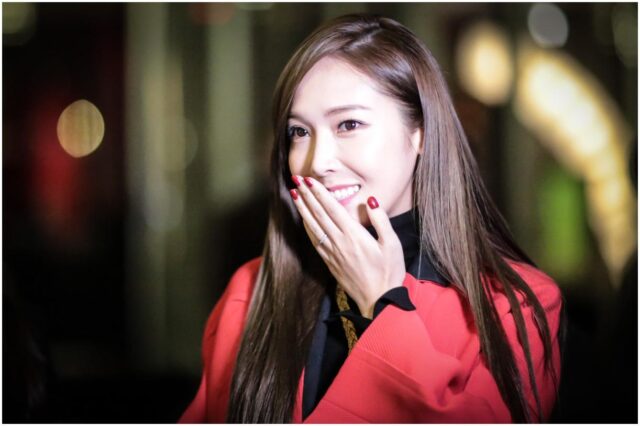 Jessica Jung is an American actress, singer-songwriter, businesswoman, fashion designer, and model who first came into the limelight due to her stunning vocal display in the popular K-pop girl band ”Girls’ Generation.”

Her nicknames are – Sergeant Sic, Ice Princess, and Sica-sama because of the cold vibe she has.

Jung has a sister named Krystal, who is 5 years younger than her. Krystal is also a performer.

At age eleven, Jessica moved to the capital city of South Korea, Seoul. There, she was a student at Korea Kent Foreign School, a private school in Seoul, South Korea.

She was scouted by SM Entertainment at the age of 11 while being on vacation with her sister.

After training in dancing, singing, and acting for seven years in SM Entertainment, she was chosen to be a member of Girls Generation, a K-pop girl group. Jung was the main vocalist in the group, alongside Taeyeon.

The girl group made its debut on August 5, 2007, and became a huge success in South Korea and worldwide.

In 2009, Jessica made her acting debut as Elle Woods in a theater production of Legally Blonde. It was scripted by Kirsten Smith and Karen McCullah Lutz, directed by Robert Luketic, and stars Luke Wilson, Reese Witherspoon, Matthew Davis, Selma Blair, Victor Garber, and Jennifer Coolidge.

In 2012, she was nominated at the second SBS MTV Best of the Best Awards in the Best Cameo category for her appearance in Sherlock.

In December 2016, the brand opened its first United States flagship store in the SoHo neighborhood of New York.

Jung said that each of the designs from the collection is one that she would like to wear.

In September 2014, she had to leave ”Girls’ Generation” due to SM Entertainment feeling that she could not balance both the commitments of a businesswoman with priorities on her fashion business as well as being a member of the group.

Her final song with the Girls’ Generation group was “Divine,” which was included in the repackaged version of SNSD’s Japanese greatest hits album, “The Best.”

In 2014, Jessica and her sister had a reality TV show called ”Jessica & Krystal.”

In 2015, she won the Asian Popularity Award at the Yahoo Asia Buzz Awards.

In May 2016, Jung made her solo singing debut, under Coridel Entertainment, with the lead single “Fly” featuring Fabolous, and released her first solo album, “With love, J.”

At the end of the year 2016, she released her 2nd solo album ”Wonderland.” The album has 6 songs, such as ”World of Dreams,” ”Dancing on the Moon,” and ”Celebrate.”

In May 2018, it was revealed that Jung had signed with United Talent Agency, a private talent agency representing artists and other entertainment professionals. The agency will represent her in North America for film, music, endorsements, and television.

She officially confirmed her relationship with Kwon in an interview with Star News in 2016.

“I actually didn’t admit nor deny [the relationship]. However, he’s already become my official boyfriend,” Jung said. ”It’s been over three years since we started dating. I’ve dated him the longest amongst the guys I have dated thus far.”

Jung has modeled for many companies like the LG Chocolate Phone and Casio Baby G Watches.

She also appeared in musicals and TV shows, like – Jessica and Krystal and Wild Romance Oh! My Lady.

Jessica is allergic to cucumbers.

In 2016, Jung appeared in the Chinese film ”I Love That Crazy Little Thing.”

On December 14, 2018, in collaboration with South Korean make-up brand AMUSE Cosmetics, she released a Christmas single named – “One More Christmas.”

Jung earned most of her wealth by being the main vocalist in the group Girls’ Generation.

Jessica also makes money from selling copies of her EPs (My Decade, Wonderland – NHR Remix, Wonderland, and With Love, J).

She founded her own clothing line called BLANC & ECLARE.

Therefore, Korean-American singer Jessica Jung has an estimated net worth of $20 million.

Her boyfriend, Tyler Kwon, has an estimated net worth of $10 million.

READ THIS NEXT: Biography of Bill Burr