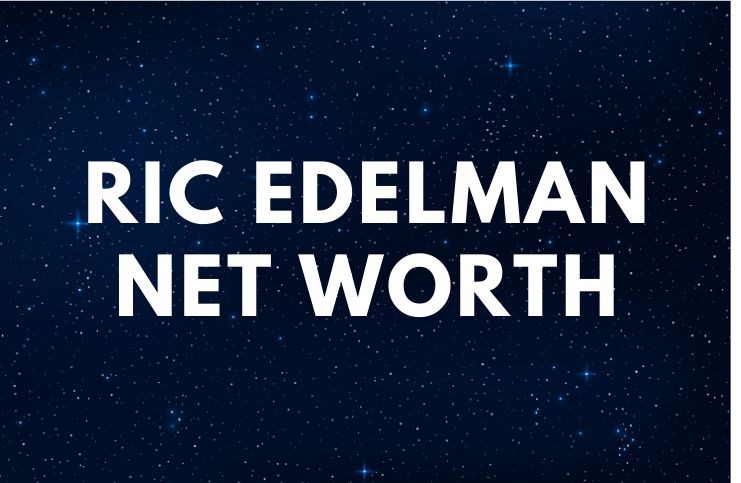 Ric Edelman is an American financial advisor with over three decades of experience. He is the founder of Edelman Financial Engines.

“Ric Edelman is one of the most successful financial advisors as a businessman.”

In December 2012, Edelman graduated from the Executive Program at Singularity University.

In 1987, Ric and his wife Jean launched Edelman Financial Services, a financial advisory firm that currently has offices in Dallas, Orange County, New York, and the Washington D.C. metro areas.

”We believe that by putting our clients first, explaining complex financial topics in easy to understand language, and helping those in need, we can achieve that goal.”

“Our mission is to make professional financial advice and investment services accessible to everyone.”

As a registered investment advisory firm, EFS acts as a fiduciary. This actually means that its advisors put your financial interest before their own.

In 2018, his company merged with Financial Engines. This resulted in a new company, called – ”Edelman Financial Engines.” Ric took up the position as chairman of financial education and client experience. He also has a position on the Board.

During an interview, Edelman explained the reason for creating the company:

“You’re faced with financial decisions every day – how to earn it, save it, spend it, and share it. But most Americans have not been shown how; as a result, many families are struggling financially.”

Edelman went on to say:

”That’s why my wife Jean and I founded Edelman Financial Services in 1987 – to help people take control of their personal finances, and their financial future.”

Later, the show has been acquired for broadcast by Bright Lights Media in Southeast Asia.

In 2012, it was ranked #2 as the most important weekend-only talk-radio show in the United States by TALKERS magazine.

During the show, he covers a wide range of personal finance topics, including:

It has over 1 million listeners every week. There are 3 seasons of the show that were produced by 3 Roads Communications.

Edelman also started the RIA Digital Asset Council, a company that is dedicated to advancing the RIA community’s understanding, knowledge, and awareness, of digital and blockchain assets.

”I created the RIA Digital Assets Council, to provide a platform that offers advisors the education they need in this space.”

He has published ten books on personal finance. His books have educated countless people worldwide and have been translated into a few languages.

Note – his latest book, The Squirrel Manifesto, is his first children’s book, which teaches kids the value of giving to charity, saving for the future, and spending money.

”In our firm’s practice, we’re not yet actively recommending that our clients own digital assets.”

“You’re investing in yourself, and that’s the best stock that you can buy right now.”

”The biggest challenge is the lack of a level playing field. As a fiduciary, everything we do is in each client’s best interests.”

”I know it can work and I know it’s a good idea for all Americans to have those private retirement savings.”

”Someone in their 20s who is starting out in their career, single, no children, not a homeowner, has very little money to invest.”

”Advisors have a responsibility to do the job for the clients they do in every other aspect of personal finance: provide advice that’s in the client’s best interest.”

In 2007, Edelman was inducted into the Rowan Public Relations Student Society Hall of Fame.

He taught personal finance at Georgetown University for about 9 years.

In October 2016, Ric Edelman and his wife donated $25 million to fund an XPRIZE competition that is seeking new approaches to curing Alzheimer’s disease, a progressive brain disorder that destroys thinking skills and memory.

After the donation, Ric declared:

“Jean and I are honored to offer this vital funding to encourage innovative approaches to defeat Alzheimer’s.”

In 2004, he was inducted into Research magazine’s Financial Advisor Hall of Fame.

In 2019, Edelman was named among the top 100 radio talk shows hosts by TALKERS magazine.

In 2012, RIABiz.com named Ric one of the 10 most influential figures in the investment advisory field.

Edelman earned most of his wealth from hosting a weekly personal finance talk radio show called The Ric Edelman Show as well as being the co-founder and the chairman of Edelman Financial Services, LLC.

Moreover, Ric is the author of 10 personal finance books that have over 1.1 million copies collectively in print. In 2016, Ric and his wife donated $25 million. Therefore, Ric Edelman has an estimated net worth of $158 million.