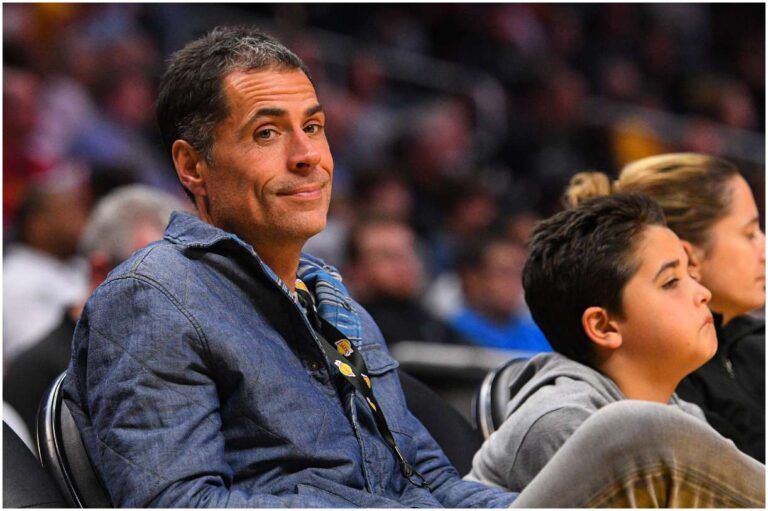 Rob Pelinka is an American sports agent, lawyer, and the general manager of the Los Angeles Lakers since 2017.

Pelinka was born on December 23, 1969, in Chicago, Illinois, USA. He said about his father:

”When I was 10, my dad would bring me to Big Ten games against Michigan, Illinois, Minnesota, Michigan State, all the great teams.”

While in high school, Rob was named MVP in a four-game tournament. In that tournament, he recorded a tournament record of 139 points and made all 41 of his free throws.

In April 2013, Rob was inducted into Lake Forest High School’s wall of fame.

In 1994, Pelinka earned a Bachelor of Business Administration from the University of Michigan Ross School of Business.

While in law school, Rob interned for Winston & Strawn LLP.

He also negotiated a contract for Kobe to remain with the Los Angeles Lakers for $136.4 million over 7 years.

After Kobe’s death, Rob said in a statement:

”There has been an amputation of part of my soul. He was, simply put, the most inspirational athlete of our time.”

Pelinka went on to say:

”What the world may not know, is that he was also the best friend anyone could ever imagine.”

He said in a different interview:

”The day after Kobe was gone, I was at home and feeling totally lost.”

”I couldn’t imagine life without the strength and guidance of my best friend.”

In March 2020, Pelinka and Kobe’s wife, Vanessa, have filed legal documents to modify Bryant’s trust, due to the fact that it hasn’t been updated after his daughter Capri’s birth.

On March 7, 2017, Rob was hired as the general manager of the LA Lakers. His hiring was much more surprising since he had never worked as a general manager.

Kobe was instrumental in Rob’s appointment as Lakers GM. According to a high-ranking NBA team executive:

”Kobe obviously had influence in getting Pelinka pushed through the door.”

On February 21, 2017, Magic Johnson was appointed as the president of basketball operations for the LA Lakers. On April 9, 2019, Magic resigned from the Los Angeles Lakers.

In May 2019, Magic laid the blame for his resignation on Rob, who he feels “betrayed” him. Johnson said:

”Now not just in the Laker office anymore, now it’s in the media and so on.”

”It’s saddening and disheartening to think he believes things that are a misperception.”

”I have talked to him several times since he decided to step away.”

”We’ve had many joy-filled conversations, so these things are surprising to hear and disheartening.”

In December 2019, Magic said for the Los Angeles Times:

”Things happened, forgive and forget. I’ve moved past that, so did Rob.”

She is a pediatrician who completed her residency at Cedars Sinai Medical Center in Los Angeles. Kristin earned her M.D from David Geffen School of Medicine at the University of California, Los Angeles. Kristin specialized in international medicine, special needs children, behavioral issues, and child development.

Rob and Kristin have two children: a daughter, named Emery, and a son, named Durham.

”Lakers franchise has such historic success, and Magic [Johnson] and I know that it is our job to continue to foster that and drive it.”

”I learned that he [Kobe Bryant] had secretly reached out to the club’s pro for private lessons and then didn’t share any of them with me. Typical Mamba mentality.”

Pelinka earned most of his wealth from working as the president of The Landmark Sports Agency and the general manager of the Los Angeles Lakers.

According to Sports Illustrated, Pelinka’s primary clients bring him more than $14.5 million for his services.

For example, through Harden’s contract ($118 million) with the Houston Rockets alone, Rob will receive $4.72 million through 2020.

Pelinka’s salary at Los Angeles Lakers is about $5 million per year. Therefore, Rob Pelinka has an estimated net worth of $30 million.

READ THIS NEXT: Is Ryan Holiday Married?