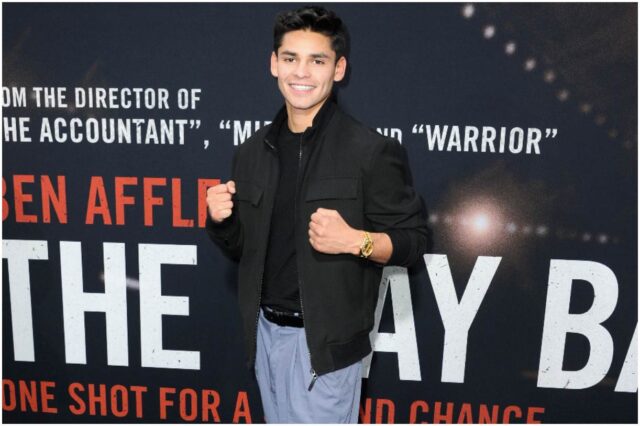 Ryan Garcia (nickname – Kingry) is an American professional boxer who knocked out Miguel Carrizoza from Mexico in under 30 seconds in 2017. Garcia has held the WBC Silver lightweight title since 2019.

His parents are Lisa and Henry Garcia. They were involved in his boxing career. For instance, his mother works as his Personal Administrative Assistant for commercial projects, while his father remains one of his trainers.

Ryan began boxing at the age of 7 in his family’s garage.

Golden Boy Promotions was established in 2002 by Oscar De La Hoya, a Mexican-American former professional boxer who is an 8-time world champion.

When he represented the US at the 1992 Summer Olympics, De La Hoya was nicknamed “The Golden Boy of boxing” by the media. Oscar is the first American of Mexican descent to own a national boxing promotional firm.

Though Ryan doesn’t speak Spanish, Garcia is currently trained by Eddy Reynoso, a professional boxing trainer who is best known for having started his career with Mexican professional boxer Canelo Alvarez in 2005.

“The Face of Boxing welcomes the Future of Boxing to camp as Eddy Reynoso will now be the head trainer of super featherweight prospect Ryan ‘Kingry’ Garcia.”

“Without a doubt, we are talking about the best prospect right now in the world of boxing. He’s a young fighter who hits hard and is very fast.”

In 2014, Garcia was a National Junior Olympics Silver Medalist.

After his scheduled fight with Avery Sparrow for September 14, 2019, was scrapped (due to the fact that Avery was arrested on September 13, 2019, and faces a gun charge for an incident in April 2019), the relationship between Ryan and his promoter Oscar De La Hoya, is highly tensioned.

This happened since after the fight was canceled, Golden Boy Promotions went to the media and said that they had offered Ryan a fight with Filipino professional boxer Romero Duno, but Garcia and his team declined.

“declined the Duno fight since the trainer believed Duno was a tough opponent to take on 24 hour notice without proper preparation.”

”Eric Gomez [Golden Boy Promotions president] had posted something indicating that Ryan believed that Duno was too tough and therefore we didn’t wanna fight him, which is a completely false statement.”

“My coach Eddy never said that! … I will continue to get peanuts, even though I move cards.”

Later, De La Hoya was asked if the parties could work things out. During an interview, Oscar confessed:

“Absolutely, why not? We can make him a lot of money, and we made him a superstar.”

Brat is a digital media network that was launched in 2017 on YouTube.

In 2019, Ryan was cast as a lead in a Brat web series. He plays Sonny Mendoza, a high school student who is committed to earning a scholarship into a respected college.

“We’re excited to have caught him at an exciting inflection point in Ryan’s career.”

Ryan is currently in a relationship with Drea Celina. They have a daughter, named Bela Garcia.

”I’m trying to have fights that put up numbers that go crazy. I want to fight for titles and for the biggest types of events.”

”I’m here to leave a statement into boxing history.”

“After this fight, I plan on taking on all those contenders and making sure I put myself into those talks!”

”This is a new age. People get to know people quicker because of social media. And I just took advantage of it.”

In January 2019, he was asked if he has a celebrity crush. Ryan responded:

Ryan often wears blue, white, and red colors and frequently carries both the Mexican and the United States flag into the ring.

Garcia has a brother named Sean Garcia, who is also a professional boxer, and 3 sisters, named – Kayla, Sasha, and Demi.

Garcia earns most of his wealth from boxing. Ryan won Junior Olympics, Junior Golden Gloves, National Pals, and  Silver Gloves. So far, Garcia has won 18 matches of his 21 matches by knockouts.

Also, he is sponsored by Gymshark (a fitness apparel brand), Abercrombie & Fitch, and Tommy Hilfiger. Therefore, professional boxer Ryan Garcia has an estimated net worth of $11 million.

READ THIS NEXT: Who is Antonio Cromartie?