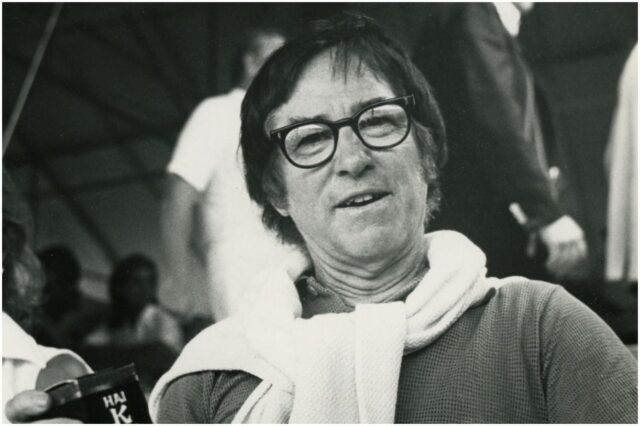 Bobby Riggs (birth name – Robert Larrimore Riggs) was an American tennis champion best known for facing women’s star Billie Jean King in the 1973 Battle of the Sexes, a match which made tennis history as the most-watched match ever, with more than 90 million worldwide watching on television as well as over 30,000 inside the Houston Astrodome.

He was also known for his philosophy:

Bobby was one of 6 children of Gideon Wright Riggs (a minister) and Agnes (Jones).

Riggs began taking tennis lessons when he was 12 years old.

At age 20, Bobby was a Davis Cup winner on the United States team, which beat Australia in 1938.

Riggs remained number 1 until he was decisively defeated by Jack Kramer in the tour of 1947-1948.

As a senior player in his 60s and 70s, he won many national titles within various age groups.

Battle of the Sexes

Fellow players and close followers of the sport have accused Bobby of deliberately losing, however, he insisted that was not the case.

“Billie Jean just caught me on a bad day.”

In the wake of the match, Bobby admitted that he had not prepared for the match and had been overconfident about facing a woman.

“I didn’t let Billie Jean win. I bet on that match and I bet on Bobby Riggs and I lost. The truth of the matter is I did not play a good match.”

Note – at the time of the match, Riggs was 55, while Billie Jean King was 29 (26 years younger than Bobby) and in the prime of her career.

”[Bobby] was 55. He was as old as my father [at the time]. For me to beat him meant absolutely nothing athletically. Nothing.”

Battle of the Sexes – The Movie

The movie Battle of the Sexes was released in 2017, and it is a biographical sports film written by Simon Beaufoy and directed by Jonathan Dayton and Valerie Faris.

It is based on Billie Jean King’s life, especially on the circumstances leading up to and surrounding her tennis match against Riggs.

He had battled prostate cancer for the past 10 years.

Bobby had a son from his first marriage, 3 children from his 2nd marriage, four grandchildren, and two brothers.

In November 1952, Riggs married Dorothy Priscilla Wheelan. The two met on the courts of the LaGorce Country Club in Miami.

From his first marriage, Riggs has two children. From his marriage to Wheelan, he has three children.

In 1976, his son, James Riggs, was found dead in a rented room in Manor Haven.

”The bigger the bet, the better I played.”

”I’m a woman specialist now. I’m going around the world to challenge all the woman champions.”

“When I was the best player in the world, cleaning up Wimbledon, not many people paid attention.”

”I love the excitement, the center stage, the limelight.”

”All my life, everything has been a contest. This so turns me on, and I so love it – I love the competition – and that’s the thing I crave like some guys crave women. I crave the game.”

”If I am to be a chauvinist pig, I want to be the number one pig.”

Bobby was a great ping pong player before he became a great tennis player.

In 1967, Riggs was inducted into the International Tennis Hall of Fame.

READ MORE: Who is Rod Carew?

Riggs earned most of his wealth from playing professional tennis.

For example, he was a 3-time US Professional champion in the 1940s, twice the United States champion at Forest Hills and a Wimbledon champion in 1939.

After he retired from tennis, Bobby started to gamble. In his autobiography, Riggs wrote that he had made $105,000 (about $2 million in the present day).

Therefore, at the time of his death, Bobby Riggs had an estimated net worth of about $5.9 million (in accordance with the current inflation).

READ THIS NEXT: Gary Danielson Net Worth