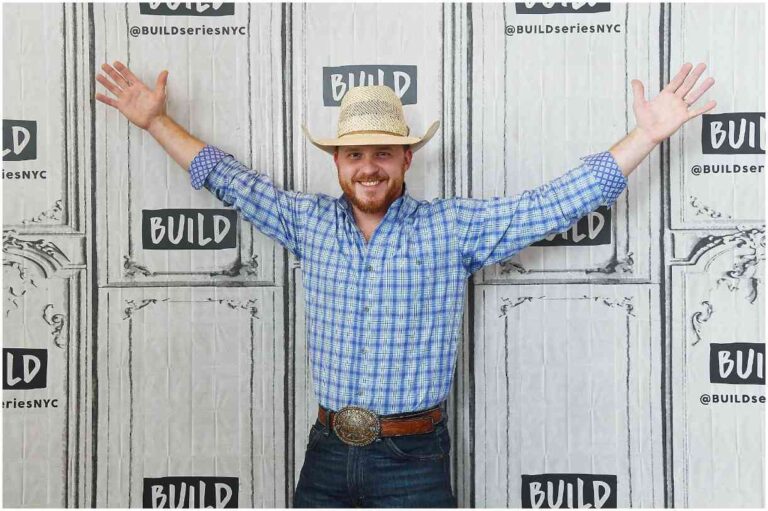 Cody Johnson is an American country singer whose breakthrough album titled – ”Cowboy Like Me” reached the Top 10 on Billboard’s Country Albums Chart.

His music has resonated with fans who appreciate songs that reflect his own life experiences.

Cody started playing music when he was 12 years old.

As a teen, Johnson competed in rodeos as a bull rider.

After high school graduation, Cody worked for the Texas Department of Criminal Justice in Huntsville, approximately 70 miles north of Houston.

There, he was supervising prison inmates.

During an interview, Johnson said:

“My dad worked for the prison system, and I followed in those footsteps, because it was a steady paycheck and there was always a job there.”

”You grow up quickly when you’re eighteen and working in the prison system.”

He also said that being a prison guard was:

“one of those things, when you grow up in a small town like Huntsville, you do what Daddy did.”

“I developed an even greater appreciation for family and friends. Seeing how easy it was to go to prison set me on the ‘straight and narrow’.”

In 2006, Johnson formed the Cody Johnson Band with his father Carl and drummer Nathan Reedy.

They released an album, titled – ”Black and White Label.”

In the same year, they added a lead guitar player, named – Matt Rogers. Later that year, at Shenanigans and Confetti’s Club in Huntsville, the band recorded a live album, called – ”Live and Rocking,” Soon, his father quit the band.

READ MORE: What is Rappin’ 4-Tay’s net worth?

In 2009, Danny Salinas joined the group on bass guitar.

Three singles from ”Six Strings One Dream” reached the top 10 of the Texas music charts.

In 2011, the band released another album, entitled – ”A Different Day.” Later that year, Cody was named New Male Vocalist of the Year at the Texas Regional Music Awards.

On January 14, 2014, they released an album, titled – ”Cowboy Like Me.” The album debuted at number 33 on the Billboard 200 and number 25 on the Billboard Top Country Albums charts. Also, it sold 8,000 copies in its first week of release.

Johnson credits his wife as having the “guts” when it comes to his career and being his handler. He said:

“Whenever I am checked out, she’s making sure, between her and my manager, Howie, that things are all copacetic.”

“Every time it gets to the part where it says, ‘If you hang on, the years unwind, and you’ll get to see your blushing bride turn into a beautiful 35 or 45 or 55.’ It makes her tear up.”

The couple has two daughters. In 2015, they welcomed Clara Mae. After two years, they had another daughter, called – Cori.

Johnson said about his daughters:

“They watch daddy play and they get in the living room in their little bouncy house and get their microphones and play their little guitars and scream at the top of their lungs, ‘Daddy, I’m like you.’ ”

”One of my favorite things to do at shows is to ask the crowd how many first-timers we have.”

“I had to explain to my girls that sometimes, even when you are sick, you need to go out and go to work.”

READ MORE: Who is Tracie Spencer?

“There’s been plenty of opportunities to ‘get rich, get famous’ over the years with a label deal that wasn’t right, and I just didn’t really care about it.”

“I see so many great, talented people that, a lot of times, I feel like they’re a lot more talented than I am, and I wonder why they’re not the next big thing.”

”My favorite track to perform is definitely “Chain Drinkin'” with Brothers Osborne—it never fails to get the crowd moving and dancing.”

”I guess I don’t really have a lot of scars other than my pride. My pride has so many scars!”

”I provide for my family and the families of the people that I love and surround myself with the talent that God gave me.”

”I’m going to try to do things in my life that better myself as a husband, as a father, as a leader, as a business owner, as a musician, as a singer, a songwriter.”

Johnson earns most of his wealth from music. So far, he has self-released seven albums. Cody also teamed up with Trent Willmon to work on A Different Day, which led him to be named as New Male Vocalist of the Year by the Texas Regional Music Awards.

His sixth album titled – ”Gotta Be Me” debuted at number 2 on Billboard’s Country Albums chart.

Moreover, Johnson was the only unsigned artist to ever sell out the 74,000-seat stadium.

”Being an independent artist is one of those things that I never really planned on doing.”

After years of being an independent artist, he signed a deal with Warner Music Nashville in 2018.

Additionally, Johnson has an Instagram account with more than 412,000 followers as well as a YouTube channel with 130,000 subscribers and over 102 million views (about $204,000 in revenue). Therefore, Cody Johnson has an estimated net worth of $1.7 million.

READ THIS NEXT: Hank Williams III Net Worth