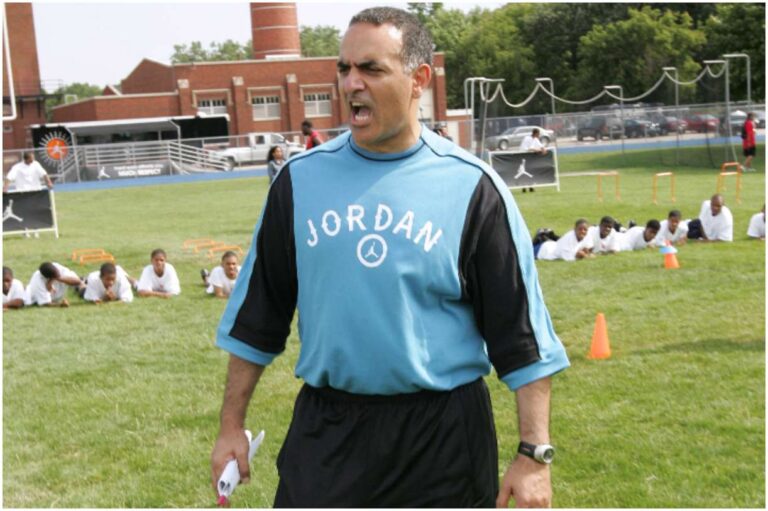 Tim Grover is an American author and fitness instructor who authored the best-selling book Relentless: From Good to Great to Unstoppable.

Grover has trained Kobe Bryant and Michael Jordan on a personal basis. In addition, Tim is the founder of ATTACK Athletics.

He is known for his physical training, however, much of Tim’s success is due to the work he does on his clients’ mental approach.

“Tim Grover is the master of mental toughness, discovering what you’re capable of achieving, getting results you never imagined reaching the highest level of success – and then going even higher.”

There is no information about his birth date or location. Both of his parents wanted him to be a doctor since they were working in the healthcare system, nevertheless, Grover’s interest was in exercise science.

After high school, Tim earned his bachelor’s degree in kinesiology from the University of Illinois-Chicago.

In 1989, Tim founded Attack Athletics, a company that has a revolutionary approach to developing elite performance, longevity, speed, agility, explosiveness, and strength of its clients.

Some of his current and former clients include:

“I consider Tim Grover to be second to none in his knowledge of sports training, and an invaluable part of my training program.”

The company has a 60,000-square-foot training center that includes a 1,000-seat multi-purpose arena and 4 NBA regulation courts in Chicago.

In 2010, Tim was awarded the University of Illinois-Chicago’s lifetime achievement award.

Here is a passage in the book which generated some controversy:

“Be honest: Would you be as successful if you followed all the rules and always behaved and never took chances? No, you’d be just like everyone else, scared about failing and worried about being liked.”

In the book, Tim detailed his training regimens for Kobe Bryant and Michael Jordan.

”Mental toughness and focus starts with your own ability to keep your mind stronger than your feelings.”

”It’s better than living with the regret and consequences of living someone else’s life and giving up on who you really are.”

”Superstars are defined by what they do out of the game, not just in the game.”

”Just because you didn’t see it before doesn’t mean it’s new.”

”You can’t rely on others to make your dreams happen.”

”If you want to stay stuck where you are, keep focusing on the past.”

”Are you thinking about what you have to do, or do you already know?”

”The end result doesn’t care how old you are.”

”Money treats the symptoms. It doesn’t treat the cause.”

”Your superpower beats in your chest 24/7, and it’s always working. Don’t waste it.”

”‘Participation trophies’ teach that it’s easier to lose and accept it, than to win and earn it.”

”Everything is impossible until someone does it.”

”Everyone is an expert until expertise is required.”

”You can’t ‘block-out’ what others say and do. Especially if it’s intended to get under your skin and get you to respond.”

”Accept the pain and consequences of being yourself.”

”Kobe can play at an extremely high level, in my estimation, for anywhere from another three-to-five years.”

Sam Ovens is the founder of SnapInspect and Consulting.com, and a Forbes 30 Under 30 Entrepreneur. Sam generated over $10 million by his 26th birthday. Ovens said about Grover:

“After reading Tim’s book (Relentless) I realized that I had been lazy my entire life and even during the times where I thought I was working hard and determined towards my goal, I was doing nothing compared to athletes like Kobe and Michael Jordan.”

”The one thing that Michael has, out of the 13 traits, that really stands out, is that he doesn’t compete with anyone else, he competes with himself. He looks for the opponent’s weakness and he’s always going to attack.”

For Tim, there are three types of competitors: Coolers, Closers, and Cleaners. They are described as follows:

“Cooler, Closer, Cleaner… good, great, unstoppable. You can be whichever you want. If you want to be unstoppable, you’ve got to make the commitment.”

He is a featured columnist at Yahoo.com and SI.com.

Grover earned most of his wealth from training famous basketball professional players. He is known as „THE Trainer.” In addition, Grover earned a good amount of money from selling his books, particularly on Amazon. Therefore, Tim Grover has an estimated net worth of $4.8 million.