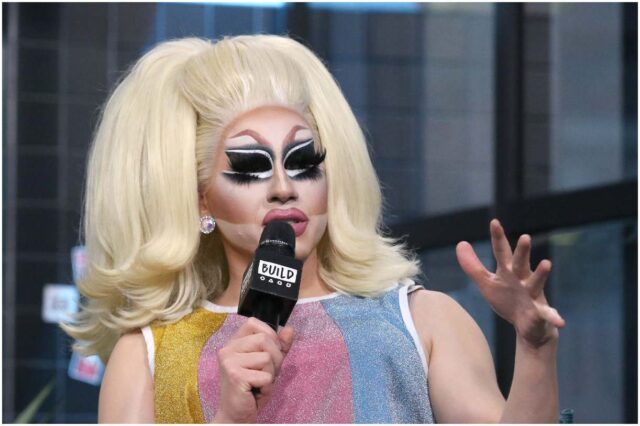 Mattel was born on August 23, 1989, in Milwaukee, Wisconsin, USA, into a Native American family.

Firkus became a vegetarian at age 9.

Brian graduated from the University of Wisconsin-Milwaukee with a Bachelor of Fine Arts in musical theatre.

Trixie made her first public appearance in a performance of The Rocky Horror Picture Show.

In 2014, Brian attended The Institute of Beauty and Wellness.

In 2015, Firkus participated in season 7 of RuPaul’s Drag Race. The show documents famous drag queen RuPaul in the search for “America’s next drag superstar.”

She was eliminated in episode 4. However, Firkus reentered ”RuPaul’s Drag Race” in episode 8 by winning the “Conjoined Twins” challenge. But, in episode 10, she was once again eliminated.

On January 25, 2018, Firkus participated in Drag Race All Stars Season 3 (a spin-off of RuPaul’s Drag Race), where she won the competition.

The series is produced by World of Wonder Productions.

Mattel met Katya while competing against each other in the 7th season of RuPaul’s Drag Race.

In 2017, Firkus and Zamolodchikova started another show called – ”The Trixie & Katya Show.” The show is actually a spin-off of ”UNHhhh.”

During an interview, Mattel said about her albums:

”My first album was called ‘Two Birds,’ so this is sort of a follow-up. ‘One Stone’ is a little less country, but it’s a companion piece to the first album.”

Trixie went on to say:

”The first album was all very country break up, and ‘why me?’. ‘One Stone’ is a little more introspective, like, ‘maybe it’s you. Maybe you’re the problem.’”

On April 25, 2019, she launched a documentary entitled – ”Trixie Mattel: Moving Parts.” The documentary premiered at the Tribeca Film Festival.

During the film, she details her devotion to performance, her career obstacles, as well as her troubled upbringing. Also, the documentary follows Trixie on her world tour, promoting her second album. It was directed by Nick Zeig-Owens.

Mattel started her YouTube channel on December 4, 2011. The channel has over 1,3 million subscribers.

Trixie Mattel is in a relationship with David Silver.

David works as a producer.

”I’m sure every drag queen will tell you, once you’ve worn something or done something, we’re over it.”

”If you’ve ever been to a reservation, you know it’s not the most uplifting place.”

”When you watch hot people put makeup on, you learn nothing. Observe the goons and goblins.”

”Being a skinny legend is more of a mindset or a persona than a number on a scale.”

”I think drag queens get on television, and then they’re like, “I just started doing drag to make a difference!”

”I am a very famous person who wins awards!”

In June 2019, Firkus was one of the 37 queens to be featured on the cover of New York Magazine.

Her main musical influences are:

During a recent interview, Mattel explained:

“I loved Barbie, I loved kids toys. I had kind of a shattered childhood.”

”So, I wanted to take these icons from childhood and reinterpret them as an adult.”

In November 2017, Zamolodchikova and Mattel starred in a drag stage adaptation of the film ”Romy and Michele’s High School Reunion.”

In 2018, Firkus was interviewed by Larry King, who asked her about the current state of drag, the success she’s garnered over the past several years, her relationship with RuPaul, and how she got her start in drag.

Larry also asked Mattel what she thinks of US President Donald Trump. She said:

“Well, we’re both dudes in wigs that wear too much bronzer.”

“We probably have a lot more in common. I don’t think he’s walked in somebody else’s pumps.”

In 2018, Zamolodchikova announced a hiatus from The Trixie & Katya Show. Later, she was replaced by Bob the Drag Queen (birth name – Christopher Caldwell).

Mattel earned most of her wealth from her shows as well as from selling her albums. Trixie also made some money from the royalties of her documentary as well as from her concerts. Mattel is also the founder of Trixie Cosmetics.

In addition, Mattel makes money from selling merch on dragqueenmerch.com/collections/trixie-mattel.

In 2020, Firkus and Katya published the book – ”Trixie and Katya’s Guide to Modern Womanhood.” Trixie also co-owns the bar ”This is It!” Therefore, drag queen Trixie Mattel has an estimated net worth of $8 million.

READ THIS NEXT: Who is Todd Pletcher?