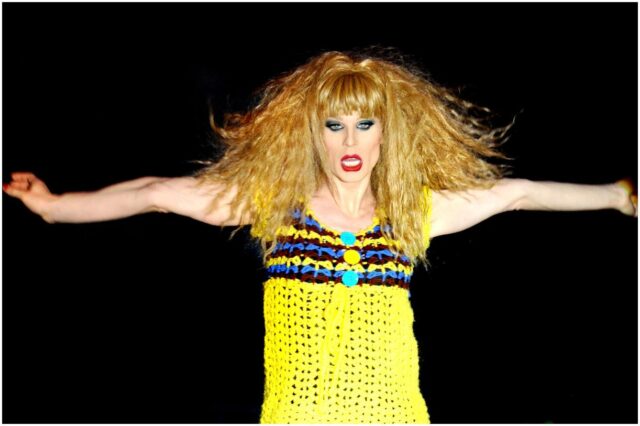 Katya Zamolodchikova is the drag persona of Brian Joseph McCook, an American drag queen, comedian, and actor who is famous for competing in the 7th season of RuPaul’s Drag Race.

After, she attended Massachusetts College of Art and Design, where she studied performance and video art in the Studio for Interrelated Media program.

She is famous for competing in the 7th season of RuPaul’s Drag Race. Although Zamolodchikova was eliminated in the show’s 11th episode, she still won the title of ”Miss Congeniality.”

In 2015, she appeared on the Christmas Queens album, singing a modified version of the song “12 Days of Christmas.”

On August 21, 2017, it was announced that Zamolodchikova and Trixie will have their own show on Viceland, entitled – ”The Trixie & Katya Show.”

In 2018, she had a role in the film Hurricane Bianca 2: From Russia With Hate, which has in the lead role Bianca del Rio and was directed by Matt Kugelman.

In 2020, Zamolodchikova and Mattel started a weekly podcast titled – “The Bald and The Beautiful.”

Katya said during an interview:

“I stole $20,000 from the shop that I worked at…I was addicted–I am addicted to crystal meth.”

In January 2018, she announced a short break from drag to take care of her crystal meth addiction and mental health.

Katya also said that she was evicted from his apartment in Los Angeles and that she began taking crystal meth after an extended stint of sobriety.

Moreover, in a discussion on his podcast Whimsically Volatile, co-hosted by Craig MacNeil, Katya said that after a relapse in Australia and a total psychotic break, she admitted herself into rehab at the Serenity Care Center in Surprise, Arizona.

”It was rock bottom. You have the bottom of the barrel,” Zamolodchikova said. She continued: ”I was the sludge under the barrel. I couldn’t tell what was real or not real. I thought it was just a drug problem. No, mama.”

“Hi, my name is not Katya. I am Brian, a recovering drug addict and workaholic. I need to take some personal time for my mental health to heal and recover.”

Katya went on to say:

”All of my tours and shows will be postponed until 2019. Local venues will provide an update over the next several weeks.”

”The most basic, most rudimentary spiritual need of the Russian people is the need for suffering, ever-present and unquenchable, everywhere and in everything.”

”In Russia, death and sex are the same. Cold, wet, dark, and painful.”

”I tried to kill myself in the shittiest way back then. But I’ve realized now that it was literally just so that I didn’t have to do something that scared the living hell out of me.”

”I don’t ever wanna be mainstream.”

”I would never be so bold or stupid or naive to say that my calling is to be a fucking ultra-sweating-hip-jiggling-idiot drag queen.”

”I’ve always loved the way the Russian language sounds, so I chose that! I also became very interested in Russian literature. I love Tolstoy, Bunin, Bulgakov, and I adore the poems of Akhmatova.”

”I’ve been through hell on meth, but I’ve also been up in the clouds, and that’s why you do it.”

”My name is Yekaterina Petrovna Zamolodchikova, but you can call my Katya… and I’m just your average run-of-the-mill Russian bisexual transvestite hooker.”

”I think about suicide every day cause I joke about it. And also I’ve been … I’ve spent a ton of my life extremely suicidal.”

“Nothing you say matters unless that camera is rolling.”

”I’m tired, I’m exhausted, my brain doesn’t work anymore, because of the drugs, because of all the gigs, I need to take vacations, like a normal person.”

”I started stealing speed from my roommate. I wanted to do drugs to do more, to live, to cope, to be happy.”

Zamolodchikova has stated that she has never been in a long-term relationship.

He performs songs of many popular Russian bands and singers, like – TATU, Alla Pugacheva, or GlukOZA.

In 2019, she was asked about her personal experiences during RuPaul’s Drag Race show. She said:

His Zodiac sign is Taurus. People born under Taurus have an attractive sense of stability and confidence. They are very strong people.

READ MORE: Everything to know about Linda Vaughn

Her drag persona, Katya Zamolodchikova, is characterized as bisexual, however, Brian himself is gay.

She rose to fame as RuPaul’s Drag Race Season 7’s Miss Congeniality. Currently, Zamolodchikova earns most of her money from her solo shows. Katya Zamolodchikova’s estimated net worth is $1 million.

READ THIS NEXT: Quinta Brunson to Star in HBO Max Comedy