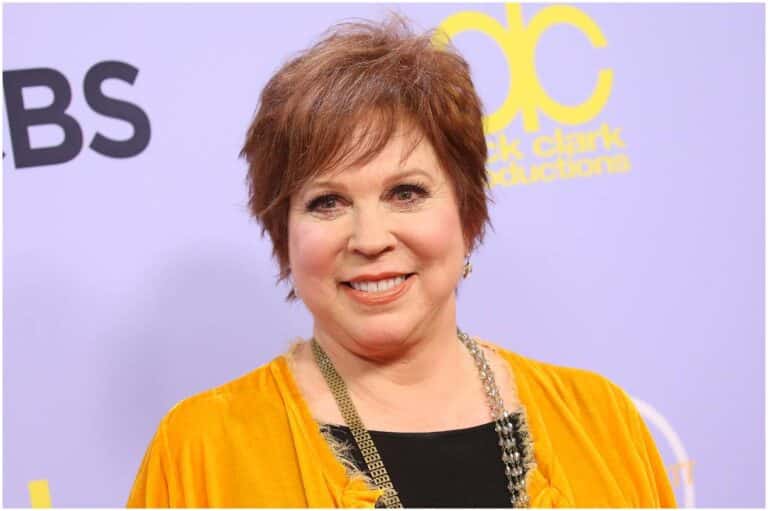 Lawrence is best known for her role on The Carol Burnett Show. She also released the single – “The Night the Lights Went Out in Georgia.”

She was born on March 26, 1949, in Inglewood, California, the USA to father Howard Axelrad (a certified public accountant) and mother Ann Alene (Loyd).

In 1967, Vicki graduated from her high school as valedictorian (the student with the highest grades) of the class.

During high school, Lawrence was a cheerleader and voted Most Likely to Succeed by her class.

At the age of 18, Vicki was handpicked by Carol Burnett to join the cast of The Carol Burnett Show, an American sketch comedy TV show. Original episodes ran from 1967 to 1978.

She once said about how she received her role in the show:

”It was an accident I ended up on The Carol Burnett Show.”

”I was literally kidnapped by television.”

Lawrence spent eleven years with The Carol Burnett Show. She even earned one Emmy Award and 5 more nominations.

In the fall of 1977, The Carol Burnett Show was still running in prime time.

In 1973, Vicki recorded the hit song – “The Night the Lights Went Out in Georgia.” The song reached number one on both Canada and the US top charts.

In April 1973, “The Night the Lights Went Out in Georgia” was awarded a gold disc by the Recording Industry Association of America. So far, the song has sold more than 2 million copies.

In 1974, Lawrence recorded her second LP for Bell Records, called – ”Ships in the Night.”

Lawrence appeared on the 1986-89 version of Hollywood Squares, where the American actress appeared both as herself and in character as “Mama.”

Vicki has made appearances on other programs, including the sitcoms:

On February 5, 2013, Vicki appeared as the character in a special sketch for Betty White’s Second Annual 90th Birthday.

In 2018, she promoted The Carol Burnett Show on the MeTV television network.

On May 1, 1995, she released her autobiography, titled – ”Vicki! The True-Life Adventures of Miss Fireball.” In the book, Lawrence recounts her musical, stage, and TV career.

On June 29, 1972, Vicki Lawrence married Bobby Russell, an American singer and songwriter who released a song named – “Saturday Morning Confusion” that peaked the US charts.

During an interview, Lawrence said about her first marriage:

”My husband was so unhappy that I had a hit record. Everybody wanted to talk to me and he was getting no credit.”

Vicki went on to say:

”I mean, it was a doomed marriage from the get-go, but that was really the catalyst, so we got divorced.”

Vicky met her second husband when Al was hired to be the head make-up artist in the early on The Carol Burnett Show.

She has two children with Schultz, a daughter and a son.

”Everyone has fond memories of ‘The Carol Burnett Show’ and the characters we did.”

”I think it is a universal problem that we are so often cruel to the people we love.”

”The fun part for me is to just really push that envelope.”

”Things have always sort of happened for me. Something else always comes up.”

”I feel it is time to lighten up and laugh about things and enjoy ourselves a little bit more.”

”Life is much too serious to be taken seriously.”

The actress is a fan of country singers:

She was good friends with:

Vicki is a member of:

Her acting mentors were Comedians Harvey Korman and Carol Burnett.

During an interview, Lawrence confessed:

”Harvey Korman was like a private tutor to me. He was such a mentor.”

Before being discovered by Carol Burnett, Lawrence was planning on becoming a dental hygienist.

In 2011, she was diagnosed with chronic idiopathic urticaria, a common skin condition which accounts for nearly 75 percent of all chronic urticaria cases. It affects 0.1 to 3 percent of people in Europe and the United States.

In 2015, Lawrence appeared on The Doctors to relay her story and talk about chronic idiopathic urticaria.

Lawrence earned most of her fame and wealth from starring in the comedy television show The Carol Burnett Show for 11 years.

Additionally, Lawrence has appeared in many other productions, including –  Vagina Monologues, Nunsense 3: The Jamboree, Annie Get Your Gun, I’m Getting My Act Together and Taking It On The Road, Special Occasions, Hello Dolly, Twigs, Chapter Two, My Fat Friend, No, No, Nanette, Send Me No Flowers, and Carousel.

Moreover, Vicki earned a good monetary revenue from her single The Night the Lights Went Out in Georgia (sold more than two million copies). Therefore, Vicki Lawrence has an estimated net worth of $9 million.

READ THIS NEXT: Who is Kate del Castillo?