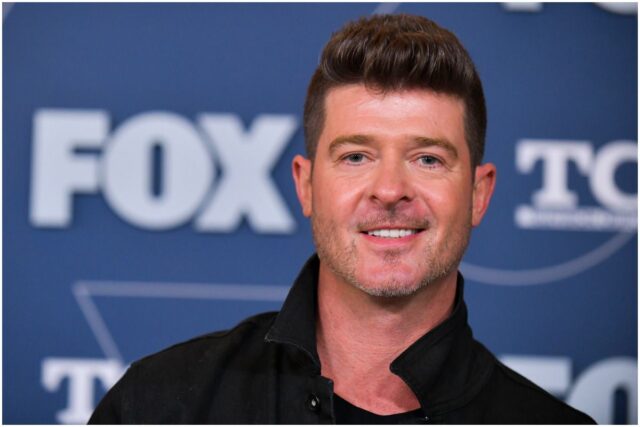 Robin Thicke is an American-Canadian singer, actor, and songwriter, best known for his 2013 single Blurred Lines.

Robin has an older brother, Brennan, and a younger half brother, Carter William.

In 2016, his father died at age 69 while playing hockey in Burbank with Carter. At the time of his death, Alan Thicke was married to Tanya Callau. ”He was a wonderful man, a great father,” Robin said for Nola in February 2020.

At the age of 16, Thicke inked a deal with Interscope Records with some help from Brian McKnight.

His future wife, Paula Patton, was featured on the cover of the album. It sold more than 119,000 copies.

On June 28, 2007, Thicke started his self-entitled YouTube channel. It has over 1,83 million subscribers.

In 2013, Robin went supernova with “Blurred Lines,” a song that spent 12 weeks atop Billboard’s Hot 100 and sold over 10 million copies. The song featured T.I. and Pharrell.

The drumming was inspired by the Marvin Gaye song “Got to Give It Up.”

The video for the song has two versions. ”I loved the clothed version, and the nude version I thought maybe was a little too much,” Thicke said in an interview. He added: ”The gentleman in me wasn’t sure that it was necessary. Then I showed it to my wife [Paula Patton], and all of her friends and everyone’s immediate response seemed to be ‘This is amazing’”

In 2018, a judge ruled that Thicke and Pharrell pay out $5 million to the family of Marvin Gaye. In addition, the Gaye family received 50% interest in ongoing royalties from the song.

”[It] encourages today’s writers to create original work that does not take advantage of the success of others while pawning it off as their own,” said Gaye family attorney Richard S Busch about the verdict.

In 2014, Thicke made his film debut starring alongside Tygh Runyan and Jaime Pressly in the  film ”Making the Rules.” Also in 2014, Robin released an album called ”Paula.” It debuted at #9 on the US Billboard 200 chart.

In August 2015, Robin’s single ”Back Together,” featuring Nicki Minaj, was released.

The couple met at a teen club in LA.

Paula filed for divorce in 2014, citing irreconcilable differences. Later, Robin began a public campaign to win her back. ”We’re apart because we just couldn’t be together anymore for a while,” Thicke said during an interview.

In 2014, Robin Thicke began dating April Love Geary — after his split from Patton. April started working as a model when she was 12 years old.

They became engaged on Christmas Eve 2018.

In August 2017, Thicke and Patton reached a custody agreement. ”The parties are ordered to share in all major decisions concerning the minor child’s health, education and welfare including, but without limitation, schooling, religion, medical care, and enrichment activities,” state the legal documents.

In February 2018, Thicke and Geary welcomed a daughter named Mia Love together.

In November 2018, it was reported that his Malibu home was destroyed in the Woolsey wildfire. ”I’m so sad but so thankful that we all made it out safe,” Robin said. ”Praying for everyone in Malibu, our home is up in flames.”

In October 2020, the two announced they were expecting their third child in December 2020. Luca Patrick was born on December 11, 2020.

”I’ve never been a celebrity fan as much as I am an artistic fan.”

”Love is the most righteous thing.”

”I don’t like labels, but I do have blue eyes, and I’m soulful, so what am I going to do?”

The musician earned most of his wealth from releasing eight studio albums – On Earth, and in Heaven, Paula, Blurred Lines, Love After War, Sex Therapy: The Session, Something Else, The Evolution of Robin Thicke, and A Beautiful World.

On YouTube, Robin has over 1.1 billion views, meaning about $3 million in revenue.

Therefore, singer Robin Thicke has an estimated net worth of $18 million.

READ THIS NEXT: Richest Rappers