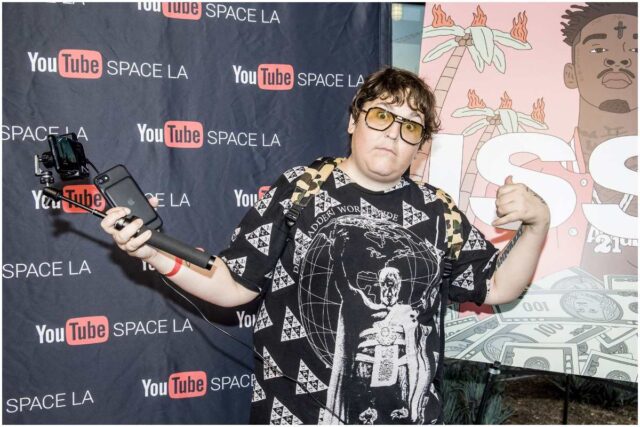 Andy Milonakis is an American actor, Twitch streamer, comedian, and YouTuber, best known for  starring in ”The Andy Milonakis Show.”

Andy is of Greek descent.

He was born with a congenital growth-hormone condition. This is the reason why he has a voice and an adolescent look even though he is an adult. ”I just hate the age thing,” Milonakis said in an interview. He continued: ”People ask me my age like 100 times a day.”

”He was a really outgoing kid,” said his mother for IndieWire. ”Always wanted to go to parties, had a lot of friends.”

In January 2003, while working at an accounting firm, Milonakis posted on AngryNakedPat.com a video called “The Super Bowl Is Gay.” After the video went viral, Andy was invited to the late-night talk show, ”Jimmy Kimmel Live!.”

”I worked on Jimmy Kimmel live, and then before that, I was a network admin for an accounting firm in NYC,” Milonakis said in a Reddit AMA. ”Kimmel hired me to do bits for his late-night show and then saw potential in making my own show, so he sat me down with MTV.”

”I thought he was a child when I first saw him online,” Kimmel confessed for HuffPost. ”When we contacted him, we were very surprised to find out he wasn’t.”

Between 2005 and 2007, Andy landed his own show – ”The Andy Milonakis Show” on MTV and MTV2. The show featured many celebrity guests such as Paul Reubens, Akon, Seth Green, Rob Schneider, Jimmy Kimmel, Nick Cannon, and Snoop Dogg.

”It’s his free-associative ability, his willingness to be genuinely strange in a way that most people can’t pull off,” said Rob Anderson about the success of ”The Andy Milonakis Show.”

In 2005, Andy performed in ”Waiting…,” a comedy flick about the lives of disgruntled restaurant employees.

On July 19, 2006, Milonakis started his self entitled YouTube channel. ”You will find that not all the videos here are pleasing to your taste,” wrote Andy in the channel description. As of November 2020, it has over 540k subscribers.

”I don’t feel like we’re a comedy rap group, but most people probably look at us like that,” Andy commented. ”Three Loco” has self-proclaimed themselves as the ”Holy Trinity of hip-hop.”

In 2015, Andy collaborated with rappers Chief Keef and Gucci Mane on the song ”Right Now.”

In 2019, he participated in King of Twitch Poker, an event hosted by Americas Cardroom.

In April 2020, he signed a one-year deal with the online poker site, Americas Cardroom.

Milonakis is not married. Also, there is no information regarding Andy Milonakis’ girlfriend.

”I don’t want to rap about my car. How generic is that? Be creative.”

”You give love, and you get love back, it’s not Karma…it’s psychology.”

”I just had a weird image in my head of Larry David playing Fortnite.”

”The only good thing about flies is that their lifespan is less than a month.”

”I had sadness for breakfast.”

Aside from several film and television projects, Milonakis hosted The Andy Milonakis Show.

His YouTube channel has over 103 million views, meaning about $300k in revenue before taxes.

Therefore, actor/comedian Andy Milonakis has an estimated net worth of $1.5 million.

READ THIS NEXT: Who is Jimmy Tatro?