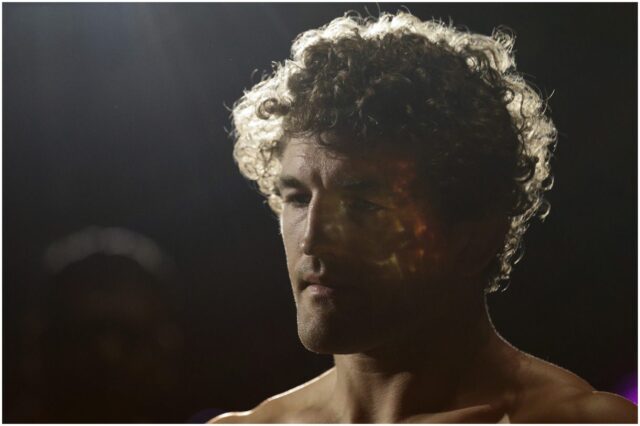 Ben Askren (nicknamed – Funky) is an American former Olympic wrestler and retired professional mixed martial artist, who is best known for being a 2013 Bellator Welterweight Champion.

He retired from the Ultimate Fighting Championship (UFC) in 2019.

He was an amateur wrestler while attending the University of Missouri.

He finished his collegiate wrestling career with a record of 153–8.

”I can’t really imagine what my life would be like without wrestling, I have been doing it since I can remember,” Ben told Walmart about what does wrestling means to him.

At the 2008 Summer Olympics, he competed in the 74 kg weight class. He won his first match in the Summer Olympics via pin against Hungarian István Veréb.

Ben defeated Josh Flowers via TKO early in the first round at the Holiday Inn Select Executive Center in Columbia, Missouri.

At Bellator 56, he defended his title against Jay Hieron.

“I don’t like Jay Hieron very much. He just bothers me, the way he talks, and he thinks very highly of himself.”

On April 6, 2012, Askren defended his title against Douglas Lima at Bellator 64.

On August 29, 2014, Ben won the fight via TKO due to strikes in the first round against Suzuki at ONE Fighting Championship: Reign of Champions. Askren had become the new ONE Welterweight Champion.

On September 7, 2017, he won via TKO due to punches against Zebaztian Kadestam at the ONE Championship: Shanghai.

On March 2, 2019, Ben made his Ultimate Fighting Championship debut at UFC 235 against the former UFC Welterweight Champion – Robbie Lawler. He won the fight via bulldog choke in the first round.

Bulldog choke is historically rare to see in an Ultimate Fighting Championship fight, however, with the right set up, it can be extremely effective.

During an interview with MMA Fighting, Askren said:

“I think I showcased some toughness. I faced some adversity. I haven’t really faced a lot of that in my career.”

On July 6, 2019, at UFC 239, Ben was violently knocked out by Jorge Masvidal with a flying knee 5 seconds into the first round. It is the fastest knockout in Ultimate Fighting Championship history.

On October 26, 2019, Ben lost the fight via submission in round three vs. Demian Maia. After the fight, Askren said:

“I was overconfident. I guess there’s a reason he’s the best grappler in the division – possibly in MMA – ever.”

In November 2019, Askren announced his retirement from the UFC. He said for ESPN:

“I’ve been thinking about this for a week and what I was going to say, and I’m filled with gratitude for how great of a career I’ve been able to have, even though obviously, in the end, it did not turn out to go my way.”

Following his retirement, Askren said that he is interested in a career in television. He said:

In January 2021, it was announced that Askren will face Jake Paul in an eight-round pro boxing match on April 17, 2021.

“I think on April 17, he [Jake Paul] is going to have a rude awakening to what being a fighter is really like,” Askren said.

“[Ben] has less losses on his record than Conor McGregor does yet I’m still going to knock him out faster than Jorge Masvidal did,” Jake said.

”I didn’t let the MMA community down, I let the world down,” Askren said after the fight. ”People f###ing hate Jake Paul and they wanted to see me make him miserable and I didn’t do that.”

”As long as I’m speaking the truth, I’m going to be OK with what I’m saying.”

In January 2020, he tried to predict the result in the match between Donald Cerrone vs Conor McGregor from the UFC 246.

Askren earned most of his wealth from being a professional mixed martial artist. He fought in UFC, ONE Championship, Bellator, and the 2008 Summer Olympics.

In addition, Ben makes money from investing in cryptocurrency as well as from sponsors. He is sponsored by Discraft.

Therefore, amateur wrestler Ben Askren has an estimated net worth of $2 million.