Matt Mitrione is an American former American football player and mixed martial artist who made his MMA debut as a competitor on The Ultimate Fighter: Heavyweights.

When Matt was young, he had extreme hyperactivity. To reduce the symptoms, Mitrione trained in Shotokan Karate, a style of karate that was developed by Gichin Funakoshi.

In 2002, he signed a contract with the New York Giants. In 2004, Matt was released by the Giants. Later, he had brief stints with Minnesota Vikings and the San Francisco 49ers. 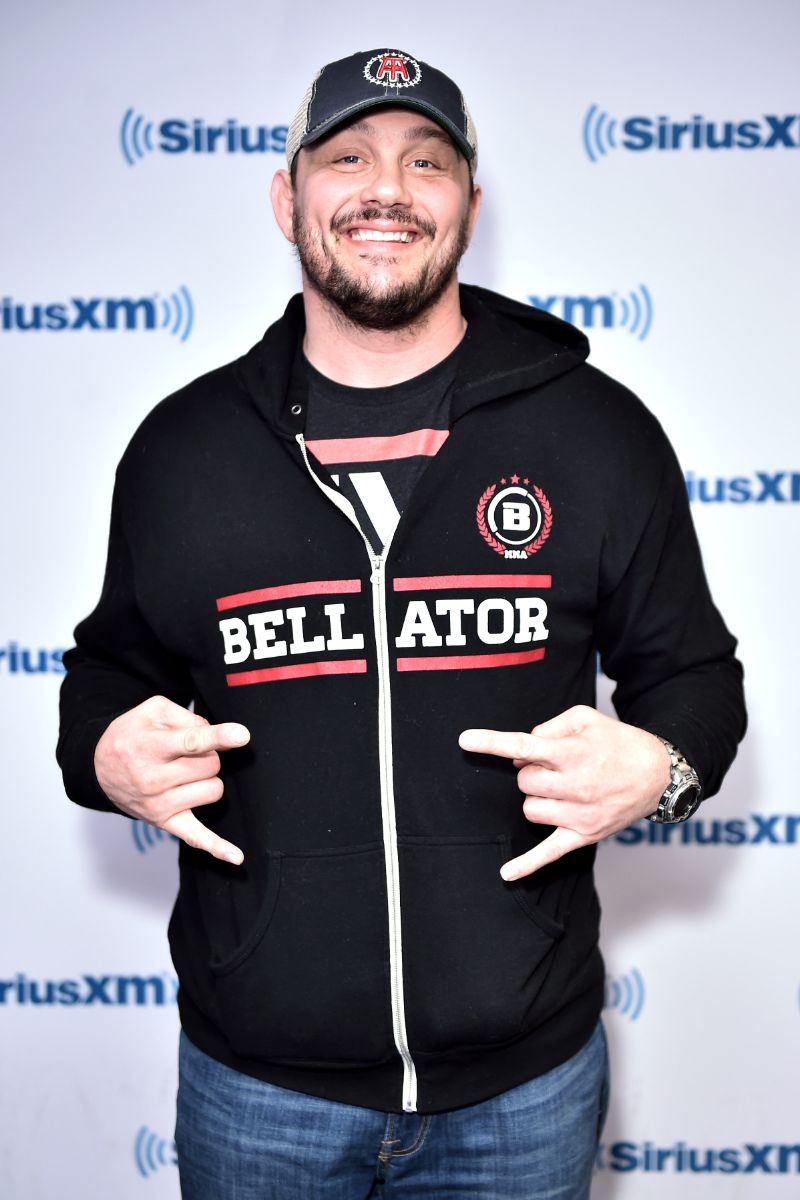 Matt made his professional MMA debut at The Ultimate Fighter: Heavyweights Finale. There, he won vs former mixed martial artist fighter Marcus Jones via KO.

In 2013, he was suspended for his comments about Fallon Fox, a transgender fighter who has fought in the women’s division on MMA shows.

”He’s chromosomally a man. He had a gender change, not a sex change. He’s still a man. He was a man for 31 years. Thirty-one years.”

Mitrione went on to say:

”That’s a couple years younger than I am. He’s a man. Six years of taking performance de-hancing drugs, you think is going to change all that? That’s ridiculous.”

”As communicated to Mr. Mitrione in the form of a written reprimand, that investigation found he went beyond expressing an honestly held belief, and that his comments represented a significant breach of the UFC’s code of conduct.”

”As a result, Mr. Mitrione received a significant monetary penalty.”

Mitrione issued an apology for his comments on Fox:

”I want to apologize for my hurtful comments about Fallon Fox and a group within our society, which, in truth, I know nothing about.”

”I now know there’s an important line between expressing an opinion on a subject and being hurtful and insensitive. I crossed that line by expressing my views in an ugly, rude and inappropriate manner.”

After facing time off and a stiff fine, Matt was able to return to the Octagon.

On March 1, 2014, he won via knockout at 4:59 of the first round vs Shawn Jordan at The Ultimate Fighter: China Finale. 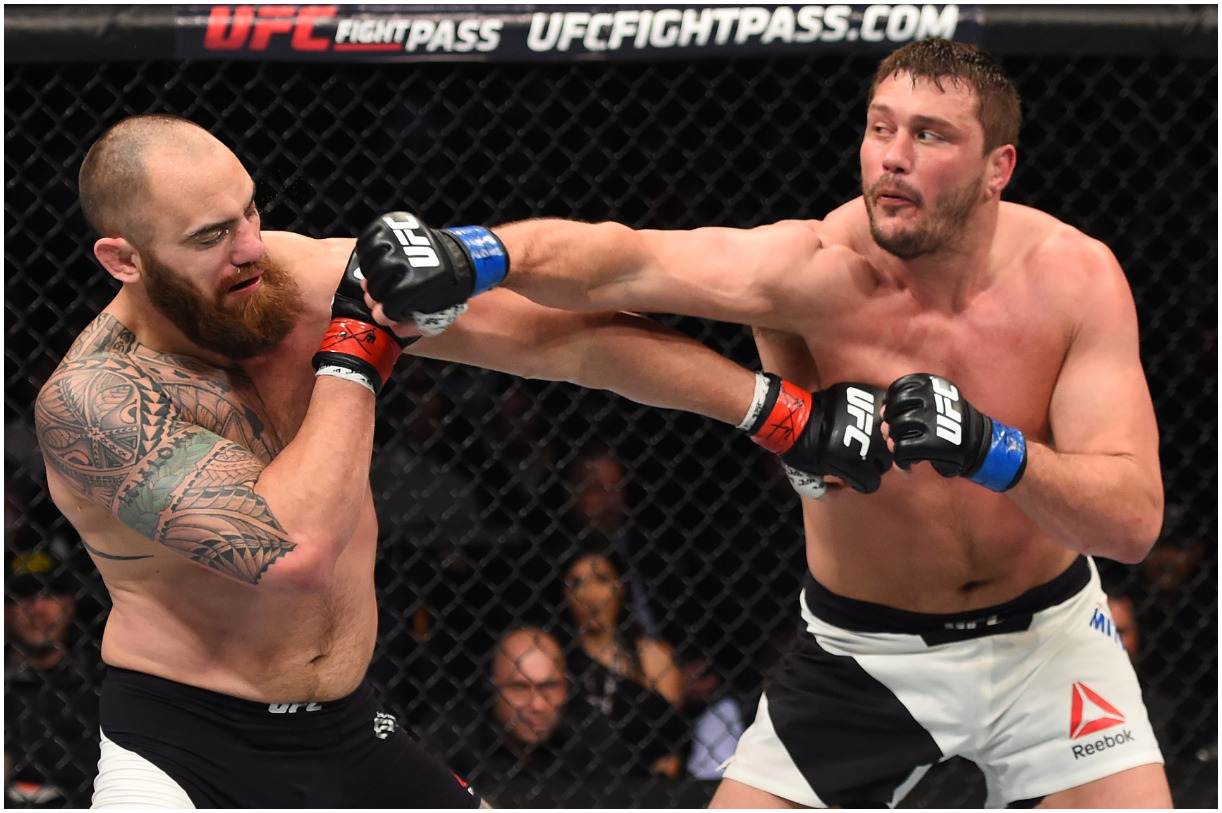 On June 24, 2017, Mitrione fought Fedor Emelianenko at Bellator NYC. He won the fight via knockout in the first round.

“Competition is my drug of choice.”

“That’s my vice, and I love being in the moment, whether I’m winning or losing or anything else.”

On August 24, 2019, he lost a match vs Kharitonov at Bellator 225. Some said that Matt lost the fight since he was distracted by the ill-fitting gum-shield. He said in an interview:

During an interview, Matt said about his participation in the reality series as one of the ‘least enjoyable’ of his entire life. He declared:

“The fighting frequently part isn’t that much of an issue. But separating yourself from the outside world, your family, all your comforts, that’s difficult for sure.”

“It was one of the least enjoyable experiences of my entire life. I would do it again, but I wouldn’t do it less for probably a million.”

In July 2021, Matt lost a fight against Tyrell Fortune during Bellator 262.

In 2016, he lost a match via TKO in the third round vs Travis Browne at UFC Fight Night 81. Matt suffered two eye pokes from Travis throughout the match. 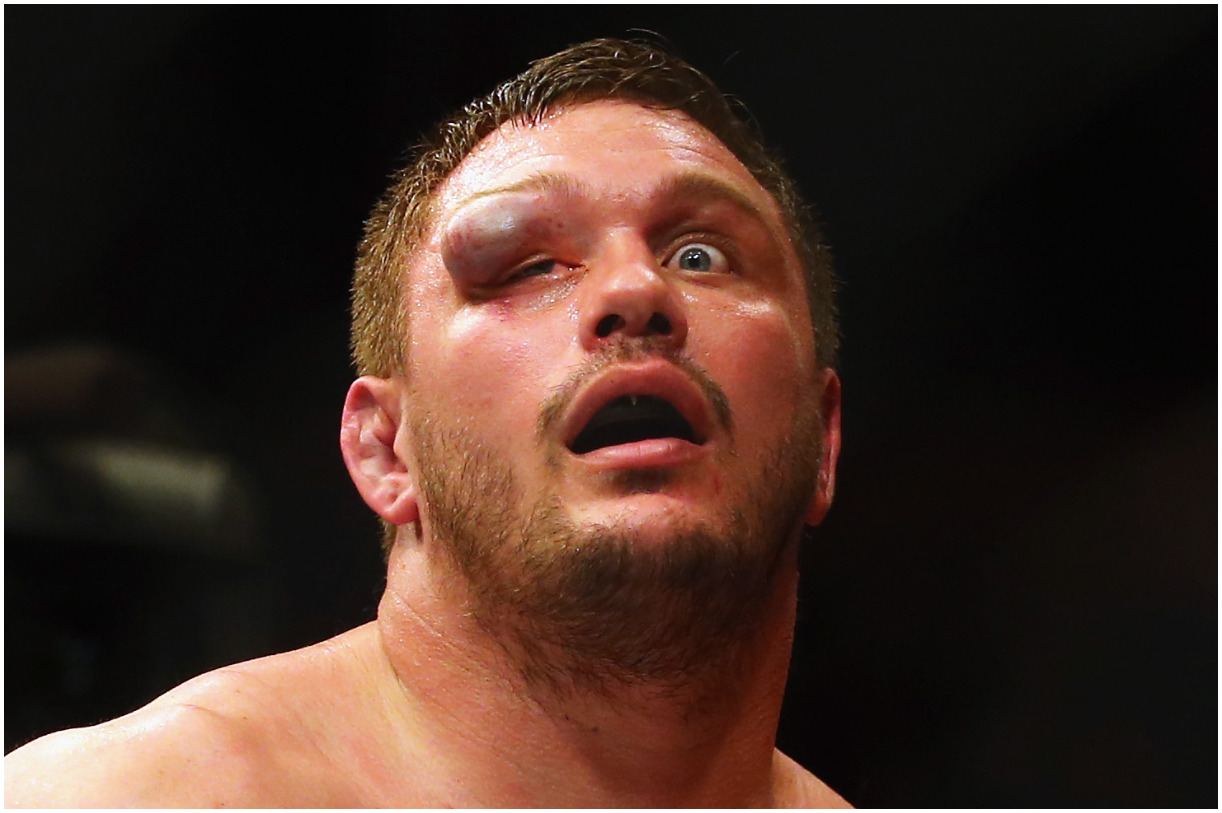 The swelling was so bad that Mitrione was unable to see out of his right eye. He explained:

“That punch wouldn’t have landed if I didn’t get poked in the eye twice.”

“I’ve never been punched like that in my life. I don’t get punched flush in the face like that. I move too much.”

Matt Mitrione was married to a woman named Tina Mitrione.

They divorced in December 2014.

Matt Mitrione is currently married to Kayla Mitrione. The wedding took place in 2019.

“I constantly admire how you give so much of yourself to them day in/out.” Matt wrote on his Instagram in May 2021.

Mitrione has three children — two boys (Jonah and Jacob) and a daughter (Gia). 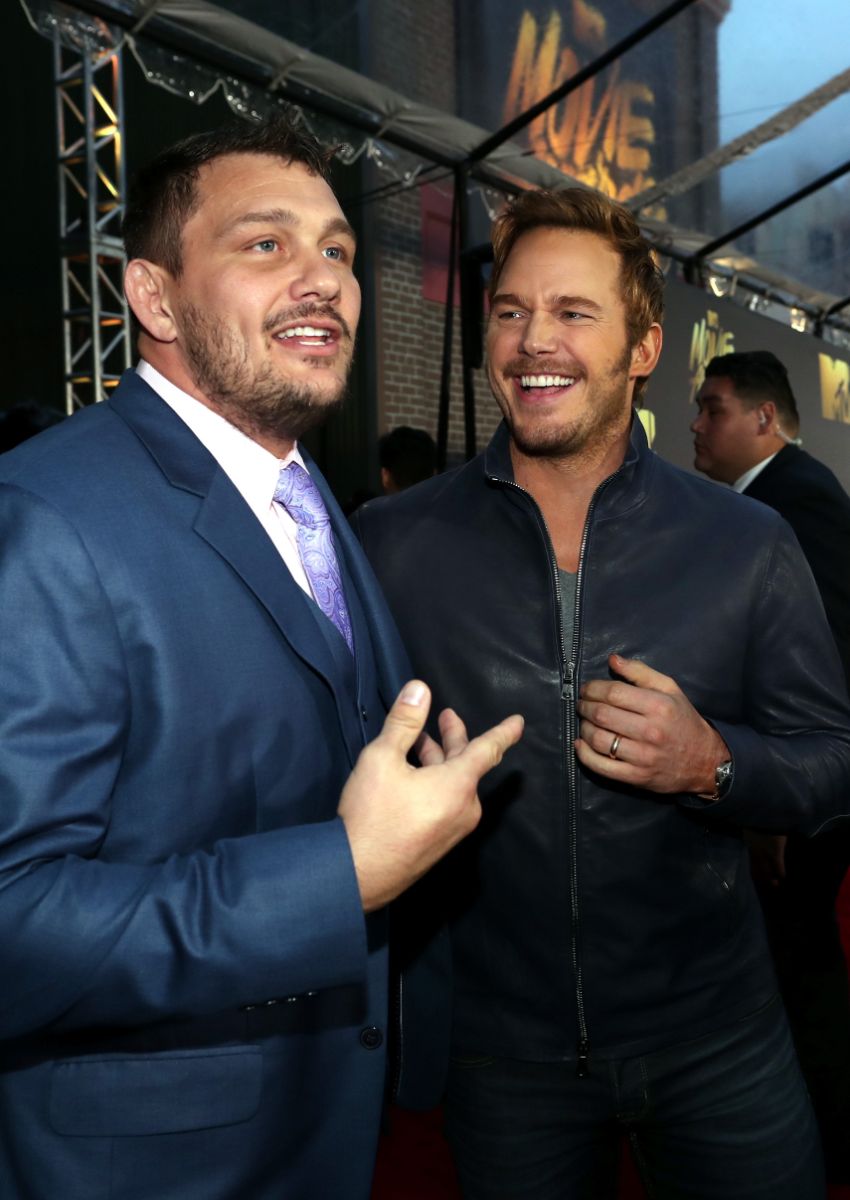 ”Does running round in circles chasing a mouse in my tiny studio apartment count as a workout?”

”I know that Kharitonov is very, very tough, and he’s very good at what he does.”

”Why my wallet more empty after the last two fights?”

”Beyoncé ask to be my life partner but I say no way, I saving myself for Ginger Spice.”

”Some people say my life is boring but today I saw a squirrel romancing a pigeon.”

In 2015, Mitrione had a role in the movie “Street” starring Beau “Casper” Smart. 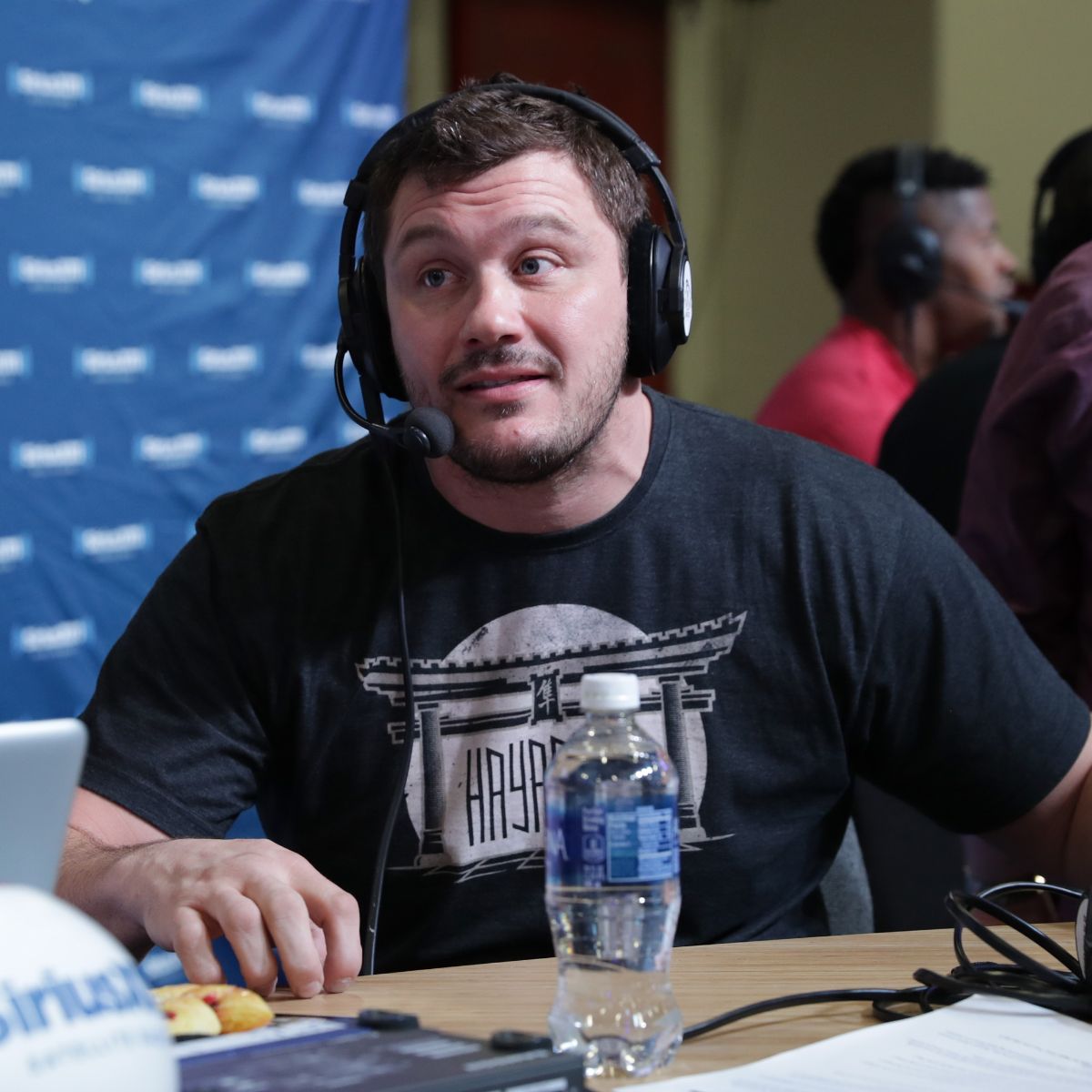 Mitrione earned most of his wealth from playing in the NFL as well as the matches he had fought.

In the National Football League, Matt played for the New York Giants, the Minnesota Vikings, and the San Francisco 49ers.

READ THIS NEXT: Joba Chamberlain Net Worth