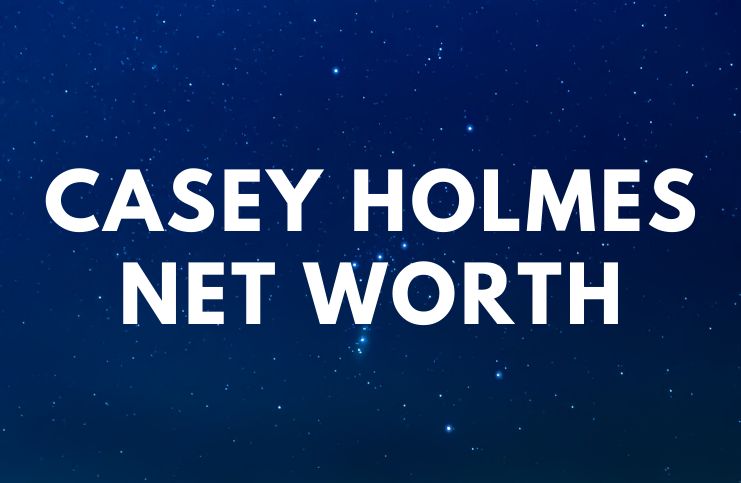 Casey Holmes is an American YouTuber and Instagram celebrity who is best known for her YouTube channel where she uploads hair and makeup videos.

During an interview, Casey explained:

”I have been doing YouTube for so long it’s actually crazy to think about.”

Holmes went on to say:

”But I wanted to do YouTube because I saw other women doing it and posting these videos where they just talked about makeup.”

Currently, her channel has more than 1.77 million subscribers and 196 million views.

On the channel, Casey provides tips on makeup and beauty. The YouTuber often uploads a series of videos, named – “Hits and Misses” during which she shares with her subscribers the most recent beauty products that she has been using.

Her most popular video is titled – ”TESTING POPULAR INSTAGRAM BEAUTY PRODUCTS! HITS & MISSES.” The video was uploaded on June 11, 2017, and it has over 2 million views.

Casey started a second YouTube channel, named – ”CaseyHolmesVlogs91” on June 7, 2013. The channel has over 47 million views and more than 648,000 subscribers.

On this channel, she usually posts updates from her life.

”I have a terrible memory so having a vlog channel and being able to document huge life events like this is perfect for me!”

In March 2017, Casey Holmes got engaged to Davis Marlar, a military man who has graduated from the United States Military Academy in Orange County.

”You are not only helping my family, you are helping to provide for theirs.”

”Having a newborn = no sleep but then to be careless and add extra no sleep on top really isn’t the best idea.”

”I have been trying so hard to juggle everything but I feel like once I get something down, more gets put on my plate.”

”I do love reds when I find the perfect mix.”

”YouTube is fun, but it is not worth it.”

When asked by Makeup about the reason she decided to get started in beauty, she responded:

”It was always so fun to watch women come together and talk about makeup.”

Some of her recommended beauty and makeup tips are:

In 2019, Casey teamed with Physicians Formula for an exclusive palette. She said:

“I’m so excited to be partnering with Physicians Formula to bring you my exclusive Butter Collection Palette!”

”This palette contains a couple of my favorite Butter products and some that we created specifically for my fans.”

Note – Physicians Formula is a company founded in 1937, however, this collaboration with Holmes was the first one in the entire brand history.

“We’ve been great fans of Casey for some time and are always smitten whenever she releases videos mentioning Physicians Formula.”

Chen went on to say:

”She’s been a longtime supporter and organic user of the brand and has helped bring in new Butter fans with her honest and sincere love for the product.”

The set sold out almost instantly. Into the box, there are pans of Butter Highlighter in Just Beachy, Butter Blush in Copper Cabana, and Butter Bronzer in Deep Bronzer. In addition, the box contains Butter Paradise mini perfume as well as Pop the Bubbly (a limited-edition peachy pink Butter Lip Cream shade).

Holmes earns most of her wealth from ads on her YouTube channels, on which she publishes product reviews, beauty tips, makeup tutorials, and vlogs. Her total views are around 243 million views, meaning about $486,000 in revenue.

Additionally, the YouTube celebrity makes money from sponsors. For example, Casey has collaborated with Smashbox (a beauty brand) to release two custom highlighter palettes. She said for Allure about the collab: “We wanted to do something that I really, really love. I love highlighter and use it all the time, so I figured we could do a highlight palette.”