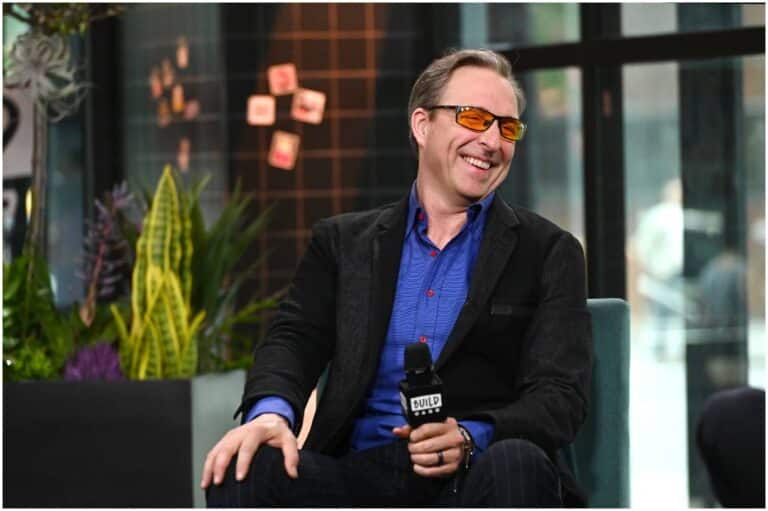 Dave Asprey is an American author, podcaster, and entrepreneur, who founded the coffee brand Bulletproof Coffee, that led to his publishing of the book The Bulletproof Diet.

With his bio-hacks, Dave lowered his biological age while learning to sleep more efficiently in less time, upgraded his brain by over 20 IQ points, and lost around 100 pounds without excessive physical exercise and counting calories.

In 1994, Dave graduated from the University of California, Santa Barbara with a degree in computer science.

Since 2002, Asprey has served as chairman of the board for the Silicon Valley Health Institute.

In 2004, Dave graduated from the University of Pennsylvania’s Wharton School of Business with an MBA.

After graduation from college, he worked in the IT industry for companies that included 3Com and Bradshaw.

He was also the director of product management for a Silicon Valley startup called NetScaler.

In the present day, Dave runs his company from a 32-acre farm on Vancouver Island, off Canada’s Pacific coast.

In 2014, he founded Bulletproof Nutrition Inc.

Dave said that he developed his Bulletproof Coffee recipe after traveling to Tibet and tasting yak-butter tea drinks.

On December 2, 2014, he released his first book, titled – ”The Bulletproof Diet: Lose up to a Pound a Day, Reclaim Energy and Focus, Upgrade Your Life.”

”My first book, The Bulletproof Diet, has sold globally somewhere around half a million copies.”

Julia Belluz, a Vox contributor, criticized the Bulletproof diet referring to it as:

On December 1, 2015, Dave released his second book, named – ”Bulletproof: The Cookbook: Lose Up to a Pound a Day, Increase Your Energy, and End Food Cravings for Good.” The book contains over 125 recipes to never get bored and stay Bulletproof for life.

In this book, Dave writes about a program that is structured around essential areas of brain performance which will help you:

On December 4, 2018, he released – ”Game Changers: What Leaders, Innovators, and Mavericks Do to Win at Life.”

The book offers readers practical advice they can put into action to reap immense rewards. In addition, it has tips from celebrities like:

On October 8, 2019, Asprey will release his latest book, titled – ”Super Human: The Bulletproof Plan to Age Backward and Maybe Even Live Forever.” In this book, Dave claims that this level of performance and health is possible for all of us.

Additionally, Dave has co-authored other health-related books with his wife. The books are:

He runs a podcast, named – “Bulletproof Radio,” which had been downloaded over 80 million times.

The couple has two kids.

“The first symptom that your mitochondria are overtaxed is fatigue.”

“Your natural state is just to kick ass, and if there’s something blocking it you can use bio-hacking to figure out what it is.”

“To get the full effect, you want at least a few ketones in your blood most of the time.”

”Biohacking is the art and science of changing the environment around you or inside you so that you have full control of your own biology.”

“I want more people to act nicely towards other people, and when your brain is turned on you act more like a human and less like a chimp.”

“Instead of discovering who you are, you become powerful when you decide who you are.”

”I travel 150 days a year. I have since the founding of the company.”

“I like spending time with healthy people whose brains are turned on.”

In his 20s, Dave weighed 300 pounds. During an interview, Asprey said that his workout indoors didn’t help him to lose any extra weight. He said:

“I just beat myself up in the gym, in this desperate quest to get healthy and to get to at least a reasonable body weight.”

To come up with his current diet, Dave read more than 150 nutrition books. He says that his diet will “reduce your risks of cancer, heart disease, stroke, diabetes, and Alzheimer’s.” Furthermore,  it will “not only make you stronger and leaner” but will also “upgrade” your brain.

Dave has said that he expects to live to age 180.

For over 20 years, Dave has been on a quest to find science-backed methods to redefine the limits of the mind and upgrade human biology.

Since then, he founded Bulletproof 360, Inc. He estimates that people all over the world have consumed over 160 million cups of Bulletproof coffee.

Dave has also said that he had spent over $1 million “hacking his own biology.” Therefore, Dave Asprey has an estimated net worth of $27 million.