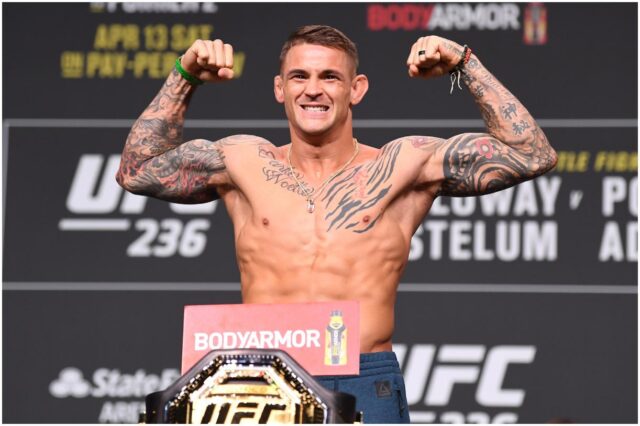 Poirier co-founded the Good Fight Foundation with his wife and was featured in the MMA documentary “Fightville.”

Dustin is of French descent, specifically of Cajun heritage, also known as Acadians.

He attended the Northside High School in Lafayette, Louisiana.

On June 11, 2011, Poirier won a fight against Jason Young through a unanimous decision at the UFC 131.

On May 15, 2012, he was defeated via submission (D’arce Choke) in the fourth round by Chan Sung Jung in the main event at UFC on Fuel TV: Korean Zombie vs. Poirier.

On February 16, 2013, he lost a fight via unanimous decision in a match vs. Cub Swanson at UFC on Fuel TV: Barão vs. McDonald.

On December 28, 2013, Poirier defeated Diego Brandão at UFC 168 via knockout in the first round.

In 2014, Dustin won a fight against Akira Corassani via TKO in the second round at The Ultimate Fighter Nations Finale.

On September 27, 2014, Poirier lost the match against Conor McGregor by TKO in the first round at UFC 178.

”I don’t just knock them out, I pick the round,” Conor said.

On June 4, 2016, Poirier won a fight against Bobby Green via knockout in the first round at UFC 199.

On September 17, 2016, Dustin lost a fight against Michael Johnson via first-round knockout at UFC Fight Night 94.

On November 11, 2017, Poirier defeated Anthony Pettis via TKO at UFC Fight Night 120. He said after the match:

”This last one was a bloodbath.”

On September 7, 2019, Dustin lost a match vs. Khabib Nurmagomedov via rear-naked choke submission in the third round at UFC 242.

Dustin said after the match:

”If I choose to fight again, I’ll be back strong. If not I’ll see what God has in store for me.”

On June 27, 2020, he won a fight against Dan Hooker at the UFC Apex facility in Las Vegas.

Dustin’s payday was at $1 million + a cut of the revenue, while McGregor’s purse was $5 million.

”Conor has taken the result very professionally, we are one and one now so maybe we do it again,” Dustin said after the fight.

On July 10, 2021, Poirier has beaten McGregor after Irishman broke his leg in the first round at UFC 264.

On September 4, 2009, Dustin Poirier got married to Jolie.

She is the owner of Bourbon & Threatd LLC.

In April 2018, the two co-founded the Good Fight Foundation. Dustin got the idea to start a foundation in 2017 after he auctioned his fight-used gear.

He said for UFC: ”That was the fuse to start a foundation.”

Jolie and Dustin have a daughter named Parker Noelle (b. August 2016).

In addition, Dustin has 3 Japanese characters on his chest that say ”bushidō.” He got his first tattoo at around age 14.

”We fall, but we get up because the ground is no place for a champion.”

”You take the risk…That’s just fighting. It’s so unpredictable.” (Source)

”Every day I wake up and go to sleep, I’m thinking about beating Cub Swanson.”

In addition, Dustin has several sponsors. In 2013, he thanked his sponsors on Facebook. Some of his sponsors include – Ortoll Holdings Inc., Muscle Pharm, Moores Machine Shop, Genox Transportation, Tomahawk Rents, and HeadRush.

In 2018, it was reported that Poirier is sponsored by Joe Rogan’s company Onnit. Therefore, professional mixed martial artist Dustin Poirier has an estimated net worth of $6.5 million.

READ THIS NEXT: Who is Ramin Djawadi?